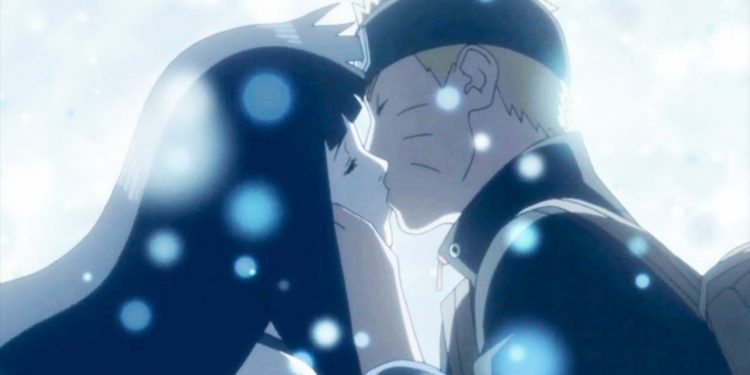 What episode will Naruto and Hinata will kiss?

In what episode does Hinata kiss Naruto? So, my Hinata and Naruto shippers are finally here. I guess you guys have to see the complete series first that you can know about the “confession”. Naruto and Hinata are the most shipped characters from the series Naruto. Throughout the series, fans were going gaga to see them together. However, this perfect-looking couple didn’t start off well. To find out the whole story about Naruto and Hinata, make sure to read the complete article till the end. Let’s start with introducing the series to our newcomers. Hope you don’t mind a lot of spoilers that are coming towards you.

The series Naruto is one of those superhit and classic anime and manga series that didn’t only start of well but also ended very well. Though the series hasn’t ended in the true means, for some, it has ended. The manga series was written and demonstrated by Masashi Kishimoto and was released in 1999. The response to the manga was very overwhelming, and later it was adapted into an anime series in 2002. The series Naruto was then renewed in Naruto Shippuden and Boruto. Currently, the series is ongoing with Boruto: Naruto Next generation.

Naruto is the protagonist of the series Naruto. The time I said that the couple didn’t start well, I really meant it. At the beginning of the series, we will witness Naruto not even giving Hinata a glance. She was invisible to him, as, at that time, Naruto was having a crush on Sakura. But this didn’t stop Hinata from loving him. Yes, at the beginning, it was a one-sided love from Hinata. When Hinata was crushing over Naruto, Naruto was crushing over Sakura, and Sakura was crushing over Sasuke. That’s complicated. But I must say, it was worth waiting. In the end, they both were meant to be with each other. So, did they end up together? Yes, they ended up together.

Their relationship didn’t limit till dating, they both got married, and they have two sweet kids. This escalated very fast, no? Let me help you guys. Throughout the series, since her childhood, Hinata was trying to show her love for Naruto, but he is busy going after Sakura. But the real love can’t hide for long. After, Naruto gets to know that Sakura is madly over Sasuke, and Sasuke also somewhere likes her back. After his final fight with naruto in chapter 699, it was revealed that Sasuke was grown romantic feelings for Sakura, to the extent that it became unbreakable. So, after this, Naruto decided to step aside. And during his final fight with Pain, we, for the very first time, realize that how much he loves Hinata.

In What episode does Hinata kiss Naruto?

At last, after so many years, Naruto gets to know who is the right one for him. Not any more chasing after Sakura. He matured and realized that its Hinata who was best to become his life partner. In anime, It was episode 166 titled “Confession” from Naruto: Shippuden. In that episode, Naruto finally confessed to Hinata and kissed her afterward. This was not the only time when they kissed. In the Naruto movie “The Last”, they both kissed at the end of the movie, and it was indeed a very romantic scene. After naruto’s confession, they both immediately started going out, and that was the time when Hinata and Naruto shippers got internal peace.

For the moment, we were all waiting for the wedding day of Naruto and Hinata. I must say, this was the most emotional scene of the whole series (after Jiraya’s death, of course). This moment literally made the fans feel butterflies in their stomachs. It was simply so sweet, romantic, and at last emotional. Episode 494 of Naruto Shippuden was the one when it all happened. The episode was titled “Naruto’s Wedding,” which was enough to make the fans go crazy for it.

All the episode numbers for all the important episodes are mentioned above, and each one of them has its own relevance to the plot. Most of you might have already started streaming it, but for those who are new, I will pave the way for you. You can stream it on Crunchyroll, it is a completely legit website and one-stop for every anime you want to stream.

ALSO READ: Will Kaguya Otsutsuki Die In Naruto? All About The Goddess Of Chakra, Kaguya