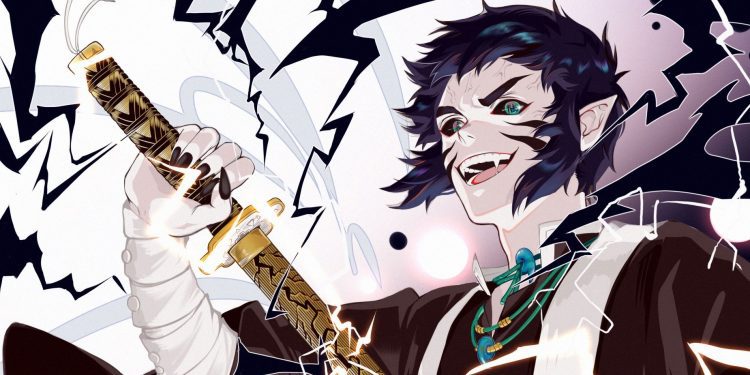 Muzan Kibutsuji always had a fascination with demons who can perform total concentration breathing. It takes a lot more of his blood to turn a breathing-style user into a demon, but it’s surely worth the investment. Take Kokushibo, for example. He was undoubtedly Muzan’s greatest asset, and he supported the demon’s reign like an unshakable pillar. Now, the demons needed a thunder breathing demon before their attack on the Ubuyashiki residence. That’s when Muzan and the other higher-ups recognized Kaigaku’s potential and promoted him to Upper 6 Rank. Here, we have brought together everything about the powers and abilities of Kaigaku.

The thunder-breathing demon appeared for a brief period in the series but was significant enough to bring a fitting end to Zenitsu’s journey. Zenitsu has always been a scaredy-cat, and he was far from mastering the six different forms of Thunder breathing. All he did was master the most primary stance of thunder breathing and kept polishing it till he created a brand new seventh form. Zenitsu’s showdown with his former senior is something that the Demon Slayer fans can never forget.

Kaigaku was one of the orphans who lived in the temple under the care of Gyomei Himejima. As a child, he was notorious and often resorted to unfair means like stealing money. After getting chased out for robbing the temple’s resources, he came across a demon in the forest. To save his skin, he guided the demon to the temple, thereby risking everyone else in it. Later on, he trained under former Thunder Hashira, Jigoro Kuwajima, and joined the Demon Slayer corps. However, he was never satisfied with what he had and gradually got distracted from the path of righteousness. Kaigaku always despised Zenitsu for getting equal treatment as Zenitsu. He wanted to be the only successor of Thunder Hashira, but Jigoro refused to abandon Zenitsu.

How Did Kaigaku Become a Demon?

Kaigaku’s sense of superiority and hatred grew over time to a point where he could no longer stand Zenitsu. Even as a demon slayer, he showed little to no intention of protecting people or killing the demons. One fateful night, he came across Kokushibo, the Upper Moon 1, who offered him to turn into a demon. He drank all of Muzan’s blood without much hesitation to find a new place for him, where he gets recognized. He devoured a huge number of humans in a considerably short time span and replaced Gyutaro as the new Upper Moon 6. Later on in the Hashira training arc, Zenitsu received a letter informing him about Kaigaku’s demon transformation and that their master had committed suicide with the guilt of nurturing a demon.

Being an Upper Moon 6, Kaigaku had incredible endurance and regenerative powers. Thanks to the huge amount of blood he received from Muzan, he became the youngest member of Upper Moon 6 (others were hundreds of years old). Moreover, he was one of the fastest demons to ever exist, just what you expect from a practitioner of thunder breathing.

With the deadly combination of Kaigaku’s thunder-breathing and electrokinetic Blood Demon art, he became a serious threat even for the likes of Hashiras. He used to generate black-colored electricity from his flesh that could burn down his target from inside out. He had mastery over 5 out of 6 forms of thunder breathing but didn’t pay enough heed to the most primary thunder breathing stance, Thunderclap, and Flash. By the end of the fight, he landed life-threatening injuries on Zenitsu, who would have surely died if Yushiro hadn’t saved him that day.

Who will Kill Kaigaku?

Zenitsu Agatsuma, Kaigaku’s former kouhai, will kill Kaigaku in the Infinity Castle arc. Kaigaku was blinded by arrogance and kept underestimating Zenitsu like some easy prey. Little did he know that Zenitsu had a Kizuki-killing trump card up his sleeves. He unleashed the seventh form of thunder breathing that he created based on the first form. Since Kaigaku never understood the first form, he couldn’t counterattack Zenitsu’s swift movements and got himself killed.