by Ranjita Paul
in Net Worth
Reading Time: 4 mins read
0 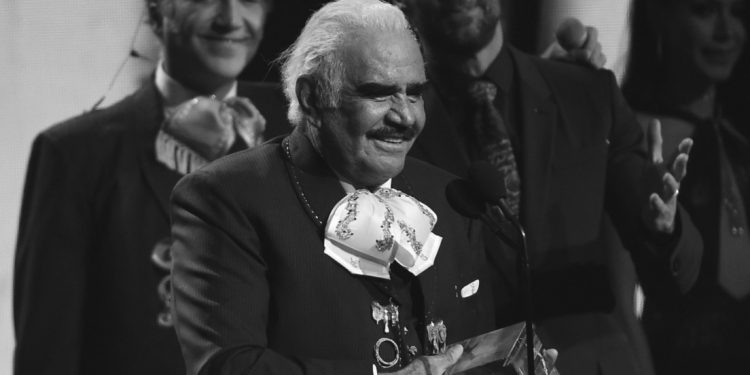 Let us read a bit about Vicente Fernandez Net Worth and his extensive singing career. Iconic star Vicente Fernández needs no introduction! The popular Mexican figure gained fame and recognition as a singer, actor, and film producer. Vicente, who is also known as the king of Ranchera, has released as many as 50 albums. As a prolific actor, Fernandez has starred in more than 30 films. The iconic star bagged as many as 3 Grammys and 8 Latin Grammys!

Vicente Fernandez is called the Idol of Mexico for a reason! The legendary art cost as managed to sell more than  50 million copies worldwide. Believe it or not but the late singer is one of the best-selling regional Mexican artists of all time. While the star stopped performing live from 2016 onwards, Vicente went on to create music. The Mexican icon will be remembered for his impressive work and the rich legacy that he left behind. His impressive work earned him a star on the Hollywood Walk of Fame in 1998. The entire world will miss their very own ‘Chente’, but his musical creation will live on to inspire generations to come. Let us take a look at all the details and lesser-known facts about Vicente Fernandez Net Worth.

Vicente Fernandez’s Net Worth is estimated to be something around $25 million. Some of Vicente Fernandez’s hit albums include Ni en Defensa Propia, Palabra de Rey and Soy de Abajo. He soon became a huge star, and his musical career peaked in 1991 when many called him the Mexican Sinatra! His tracks like Aunque me duela el alma Mujeres divinas, and Acá entre nos went on to become classics.

His 2006 album titled La tragedia del vaquero was certified as platinum by the United States. Fernandez went on to win back-to-back Latin Grammys and went on to become a legend over the decades. The singer also released his book titled Pero sigo siendo el Rey in 2013. The book has several unpublished pictures from his career. He also spent a fair share of time acting, and his last movie was Mi Querido Viejo. The singer was earlier accused of sexual assault, which the star denied. These assault allegations soon fizzled out.

The year is ending on a sad note for the Mexican music industry as they lost one of their star, Vicente Fernández. The legendary star, also known as the King of Rancheras, passed away. He was 81 years old. Take a look at this heartfelt post that Jaime Camil has posted for the late artist. Camil is all set to star in the upcoming Netflix series portraying the legendary Mexican star. Several celebs have paid their tribute to the late star.

The iconic singer was hospitalized for months after he had an accident at the ranch. As the artist suffered from Guillain-Barré syndrome, his recovery was extremely slow.  The President of Mexico Andrés Manuel López Obrador also releases a statement while giving condolences to the family. The singer, earlier, was diagnosed with severe health issues as well.

Netflix To Make A Series On Vicente Fernandez?

Streaming giant Netflix is paying a heartfelt tribute to the late Mexican star Vicente Fernandez. We are going to see a series based on the artist’s life starring Jaime Camil in the lead. The project is reportedly titled The Idol of the People. The lead star has opened up about the fact about how honored he is to portray the King of Ranchera on screen.

Camil described it as biggest and most important challenges of his career. As the Musial world lost Vicente Fernandez, Jaime Camil paired his heartfelt tribute while admitting how he learned so much about the artist while preparing for his role in the upcoming series. The actor gained huge recognition after starring as Rogelio de la Vega in the hit series Jane the Virgin. Fans surely are excited to see the life of one of the most iconic Mexican star come alive on screen.