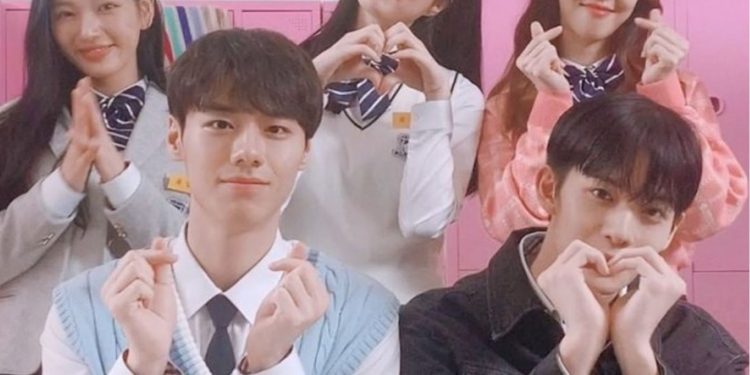 ‘User Not Found’ is a Korean romance web drama produced by Why Not Media (KOK). This series stars the well-known idol Bae Jinyoung from CIX and is getting much attention from K-pop fans due to that. In the recent years, web dramas have become almost as watched as series that are aired on television. The short episodes and engaging stories often keep viewers happy. KOK has made a name for itself as a contender to be acknowledged in this field. Their web dramas have been gaining international engagement for more than a year now. Most web dramas these days also have subtitles in multiple languages, which results in large viewership.

‘User Not Found’ is a drama in a high school setting. It has themes of suspense in it which keeps the viewers on the edge of their seats. It tells the story of two girls who share the same name and come as newly transferred students to a school at the same time. This warrants for a lot of confusion which leads to quite a huge misunderstanding. It is a fun drama with an interesting mix of characters. Let’s take a look at the lead cast this drama comprises of!

The story of User Not Found focuses mainly on 4 characters.

Bae Jinyoung takes up the role of ‘Shin Yijoon’, the male lead of this drama. He is a quiet and reserved boy who is popular in school for his dashing looks. Yijoon is known by many as a cold characters, but he is actually very soft-hearted and has a hard time turning people down. He likes to keep to himself and seems very guarded. The drama hints at a possibly troubled past and his love for music. This drama marks Jinyoung’s debut as an actor. He is a member of the boy-group CIX and formerly belonged in Wanna One.

Shin Sohyun plays ‘Yoo Minjae’ in this series. She moves to a new school and wants to start afresh there. She had no friends in her old school and thus wants to be more active and make friends at this one. Minjae ditches her glasses and changes how she carries herself in order to achieve this goal. She is met with a positive response, but unfortunately, it is all due to a misunderstanding. Sohyun made her acting debut in 2017 but played the most prominent role earlier this year in web drama ‘The Moment the Heart Shines’.

Han Yeji plays the other ‘Yoo Minjae’ in User Not Found. She is the very opposite of Sohyun’s character in being popular, having good grades, and a large following on social media. There are rumors that she was in training to become an idol. All the information the kids have on Yoo Minjae are largely circulated gossip. When she arrives at her new school, she does everything to avoid being the center of attention. This project marks Yeji’s debut as an actor.

Ahn Semin takes on the role of ‘Shin Hyejun’. Hyejun is Yijoon’s cousin. He appears cheerful and well-liked by his classmates. He is also the class president and is good at studying. Hyejun’s character is portrayed as almost too perfect. However, there seems to be something more than what he shows to him. He is one of the more interesting characters in the show. Ahn Semin made his acting debut in Playlist’s web drama ‘Let Me Off The Earth’ in 2020.

The drama is centered around the school life of these characters and their friends. It mostly focuses on both the Minjae’s and how they resolve the issues that come up due to them sharing the same name. When they both realize that they want what the other has, they decide to quietly swap identities. We are also able to witness the changing relationships between the lead characters and the romance that blossoms slowly.

Where to Watch ‘User Not Found’

User Not Found is available for streaming on Viki. It airs every Friday and Saturday. The drama premiered on December 3, 2021, and plans on wrapping up in February 2022. The cute romance between both the leads and the chemistry between the two Minjae’s makes this drama entertaining. The mild suspense is enough to keep you engaged and makes you look forward to what is coming next.