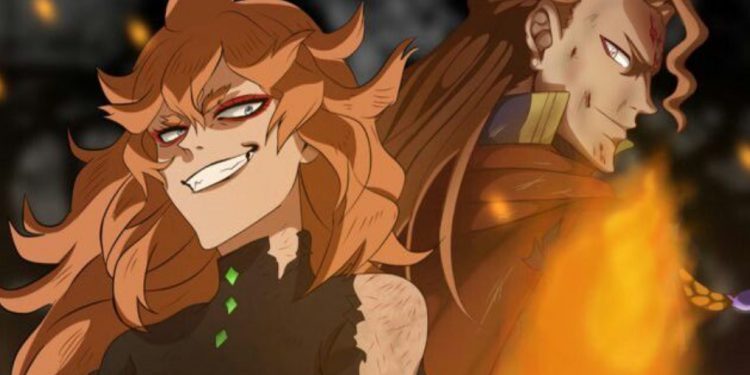 Nacht told them not to allow the King of Devils to get to the human world no matter what happens. Luck, Magna, Charmy, Gordon, Gauche, and other members of Black Bulls agrees to that and decide to attack with killer blows. The battle inside the Spade Kingdom has taken another level, and everyone is surprised to witness such an intense battle. The warriors outside the castle can’t move due to Gravity Magic before the Ultra Black Bull appears. Luck reveals that he can see Captain Yami and the Golden Dawn Captain.

The rest of the team decided that they would get Yami and William out of that spell. The King Supreme Devil continues to rampage and exchange massive blows with Ultra Black Bull. Nacht took his Devil form and noticed that Lucifero has fused with Qliphoth, and he is also using a vessel to manifest, and Yami with William is within the vessel’s core. Nacht is glad that Luficero is yet to manifest, and they can save Yami and William in time. He decided to free the two while others fought with the King of Supreme Devils.

Nacht has learned that if they rescue Yami and William, they can shut the Underworld. Ultra Giant Bull is also taking some damages while also inflicting the damages on the King of Supreme Devils. Gordon, Charmy, and Vanessa find that the King of Supreme Devil is not at 100%, but they feel vast magic and wonder how they can keep up with it since they tried to absorb that magic. Vanessa realizes that Rogue’s power is not enough, but they can protect the central area. They know that they have to do things quickly before they run out of magic.

The Black Bulls agree that they have to settle the score faster. Outside the Spade Kingdom castle, Mereoleona and Fugeleona have unleashed two flaming dragons that are helping them to slash the High-Ranked Devils. The two have made great tag-team and attacks simultaneously. Back inside, Ultra Black Bull vs. King of Supreme Devils continues. The Black Bulls with the Ultra Black Bull attack at the same time while mixing their combos. Outside, they worried that the gravity is increasing, and they won’t survive if this continues.

The warriors wonder what Fugeleona and Mereoleon are made off since they can stand up amid gravity like that. The battle continues from both side, and all we can see is explosives and bangs. The warriors outside think that they can die at any moment since the gravity is crushing them. They wish that someone would appear and save them. The Black Bulls believe that everything will be okay soon. Asta appears wielding Yamai’s blade and gets ready to land the final blow. But someone called out his name while he prepared himself to fight. The chapter ends with Asta wielding Captain Yami’s sword.

Black Clover Chapter 316 will be released on 12 December 2021. The showdown between the Magic Knights and Devils continues as the Black Bull aims to achieve their goal and revenge on the Devils. This battle might end soon since only one enemy, the King of Supreme Devils, must be defeated, and they seal the Underworld. Let’s look at Black Clover Chapter 316 official details.