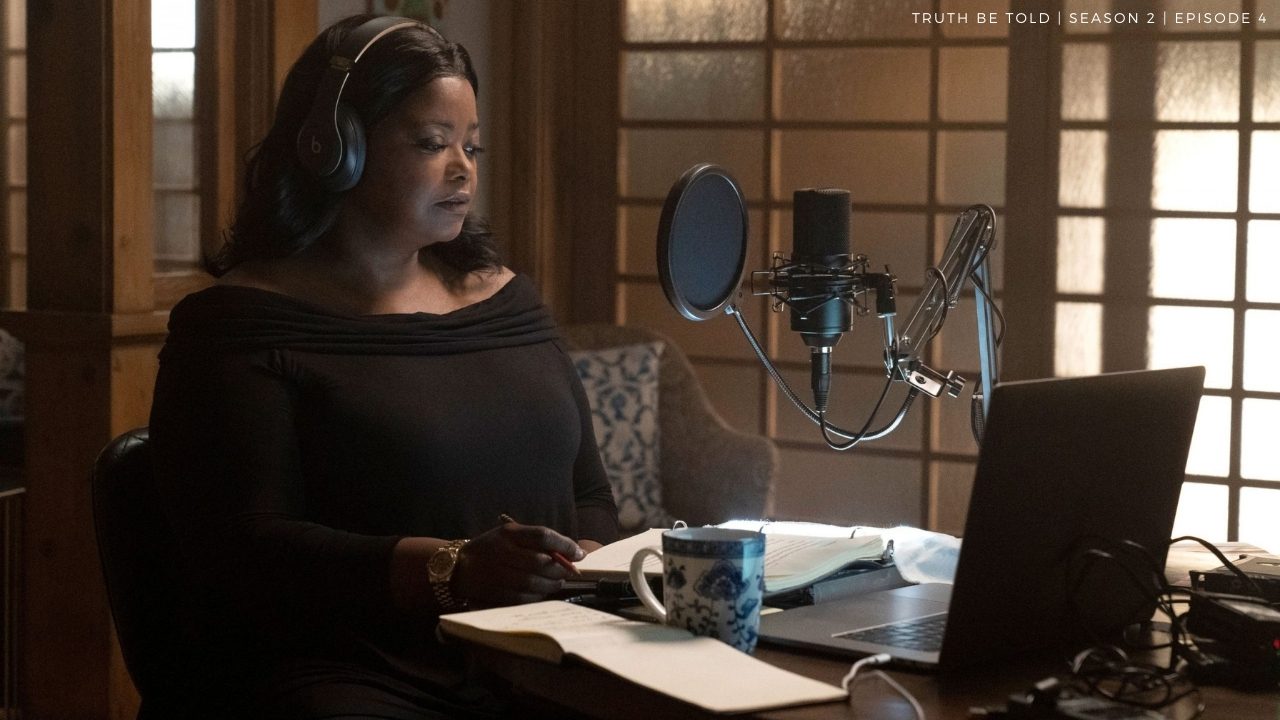 Truth Be Told season 2 has started dropping out new episodes almost recently, and there is yet another tightly knit story that we have to be a part of. Previously on the show, we got more information regarding the death of Joshua. Given the fact that there was another unidentified dead body found with him, the characters are getting a lead as to who it might actually be. Later in the scenes, it was revealed that this body was of his son itself. This episode started with Poppy as the camera followed her recording the podcast.

Here, she is talking about how his son was kept a secret from Micah. On the other hand, Drew and Joshua found themselves together after they were allegedly separated from each other for a long time. Then we see Ramone. She is alone in the house where Micah lives. The new revelation comes forward as we see that Ramone is hugging Joshua’s clothes and crying. It obviously hints at a secret relationship the two might be having before he died. On the other hand, many complications arise when Micah blames her assistant Ramon for having a history of physical assault and violence.

Thus, in the eyes of the police, Ramon has now become an instant suspect in the murder of Joshua as well as Drew. Now, Ramon comes forward to explain his story in a better version than what is portrayed for him. As it so happens, the person that he beat up when he was little was actually the one who bullied him for no reason. Poppy decides to clear Ramon’s name from the case but soon, he was found dead in his apartment. These were the biggest cliffhangers that the creators have left us on. Thus, let us discuss the further details of the series with you guys.

A still from Truth Be Told Season 2

Truth Be Told Season 2 Episode 4 is scheduled for release on September 10, 2021. This episode is going to drop out at 3 AM as per the Eastern Time on Apple TV Plus. You guys should probably watch out for new episodes of the series every week, which come out on Fridays. Now, if you want to check all the possible options to watch this show, then we are sad to inform you that there is only one.

Yes, a fan can only watch the episodes of this amazing drama through Apple TV Plus only. There is no other legal way to stream all of these episodes. If you wish to buy a subscription to the platform, it is available for just 5 US dollars every month and comes along with a free one-week trial. You can even cancel anytime. There is a 50 US dollar deal in buying the yearly subscription to the streaming giant. In addition to Truth Be Told, all the fans will be subjected to a variety of new dramas as well that are available to watch in its vast library of mostly original content.

In Truth Be Told Season 2 Episode 4, which is titled In Another Life, we will unpack another set of drama. We might witness the secret that Joshua has been trying to keep all along. The fact that he has been living without his wife actually knowing is something too big. If this secret comes out in any way, eyebrows will also be raised at the son that Joshua kept secret from her all this time. All of these are suspected to come out sooner than later, given the fact that investigation on his casing is proceeding at a remarkable speed.

On the other hand, there will also be light shed on the story of Poppy’s dad, whose name is Shreve. All this time, this man has been leading a dramatic life in the form of a gang leader, and nobody can complain. Given the fact that his memory is quite fragile now, he has planned to record everything. This means that more information will be provided to us regarding all the deeds that he has done in the past.