Fairy Tail is one of those rare shounen anime that has a light-hearted feel to it while drawing out an intense plot. It is fun to watch and easy to binge. The anime is based on the manga series by Hiro Mashima. The manga was published by Kodansha and ran for 63 volumes. Its anime adaptation ran from 2009 to 2019 and covered 328 episodes. Four studios took up to its animation through its course of running. These studios were A1 Pictures, Satelight, Bridge, and Clover Works. The anime was licensed by Funimation and is available for streaming in the same. The series, although less intense, has some great characters and fight scenes. We have compiled the strongest attacks in Fairy Tail that made their way into some of the most unforgettable battles of the Series.

The offensive and defensive attacks in Fairy Tail were somewhat redundant towards the end of the story. Yet, there were some overpowered characters like Laxus and Acnologia that poked some intense sequences into the series.

Here is a list of the top ten strongest attacks in Fairy Tail that ran a chill through the spine of the viewers. The list is not ranked in any order. These attacks come from some of the most epic battles from Fairy Tail. Battles as such made us look back into the series as it flipped its switch temporarily from its fun outlook to total bloodthirsty warzone.

The Celestial Spirit King was summoned by Lucy. In his battle against Mard Geer, the Celestial Spirit King makes use of the Galaxia Blade, a superior technique with destructive after-effects. It is an omnidirectional attack. The King points his sword upwards while holding it with both of his hands. When he completes the incantation, the clouds clear up, and a bright light covers a large area. This light purifies all the darkness in the area covered by the light. Every dark curse or enchantment in the area is dispelled. Also, the one who placed the dark incantation is turned to stone.

The Galaxia Blade is not an offensive technique. Instead, it is a form of purification that eradicates the evil forces out of a region. Yet, it is one of the most epic powers depicted in the Fairy Tail series.

Gray Fullbuster manifests ice using Devil Slayers’ magic. Unlike the ice he usually produces, this ice is colder, stronger, and harder to thaw. Ice Devil Slayer magic is a superior form of magic. A spell from this superior magic is the Ice Devil’s Rage which was one of the strongest attacks in Fairy Tail. Gray attacks by exhaling a purple blizzard that contains the coldest air, ice, and snow. The attack is highly devastating with a high damage rate. Anyone within its range will be inflicted with injuries through its force of impact.

Natsu never failed to exhibit killer moves that made us appreciate the brilliance in the making. As a dragon slayer, he was stacked with abilities over abilities, each of which exceeded the other. One of his power moves was the Lightning Fire Dragon Mode spell. The Crimson Lotus Exploding Lightning Blade was a spell of the same kind. He produced raging flame in one hand and lightning in the other. When he swings his arms, a vortex of lightning and fire is created that can damage his opponent extensively.

It is a modified and enhanced version of the Crimson Lotus Exploding Flame Blade. 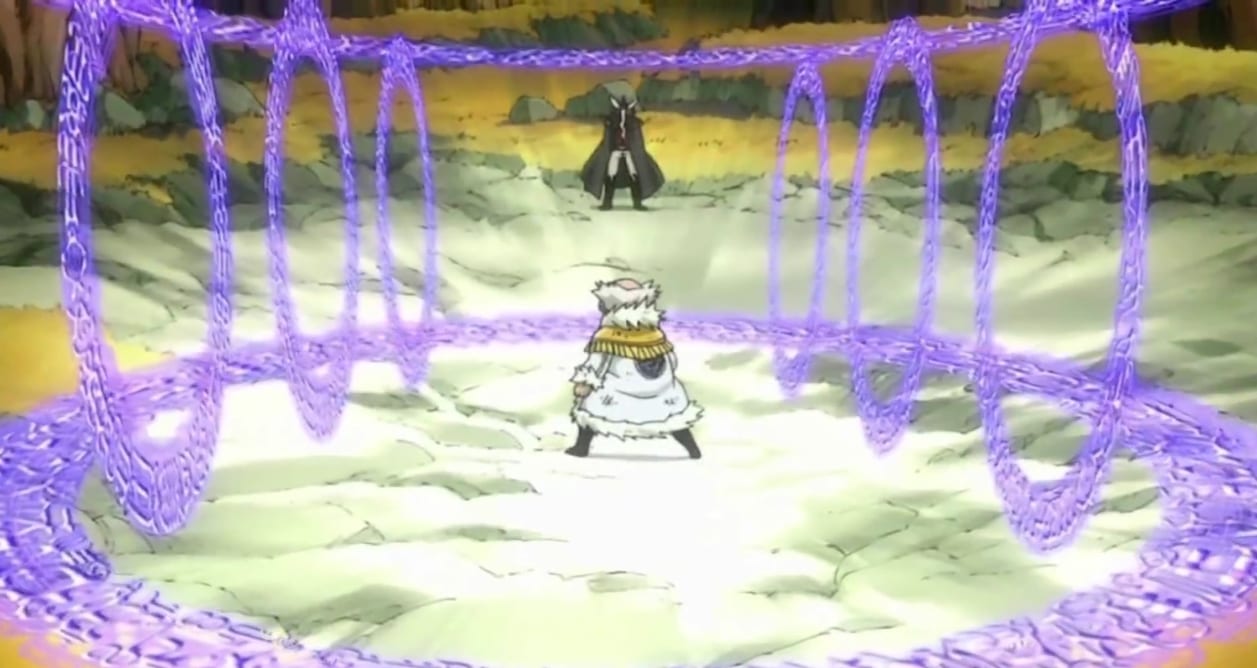 Being one of the founders of the Fairy Tail guild, Precht (popularly known as Hades) was designed as powerful. He makes some of the strongest attacks in Fairy Tail. Some of the overwhelming powers were Nemesis and the Amaterasu. Using Nemesis, Hades could create demons from the debris of his ship. These demons were strong and could make long-range attacks that inflicted a good amount of damage.

On the other hand, Amaterasu is an offensive magic technique that dealt direct damage to his enemies. Using various hand gestures, Hades targets an area and covers it with a seal. When the hand gestures are completed, the selected area undergoes an explosion. These explosions are lethal to anyone within the seal. 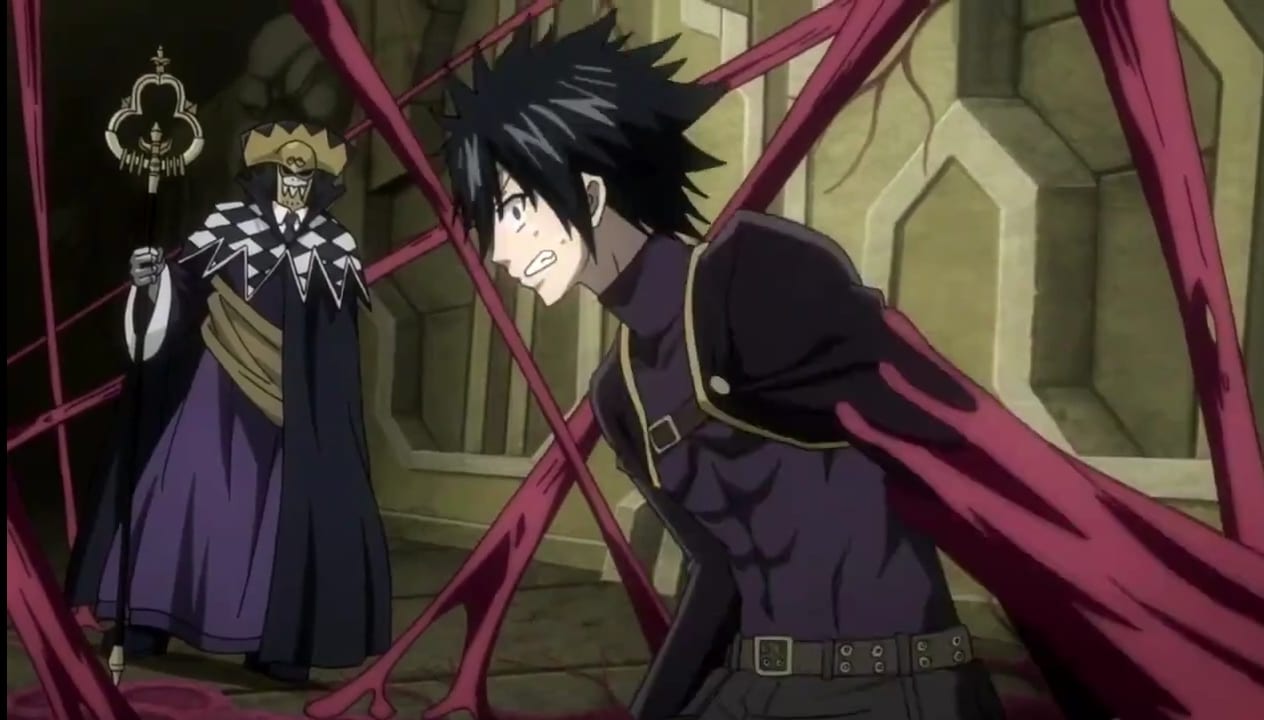 Mard Geer’s Alegria was a curse that could be deadly and annoying at the same time. The terrible part of this attack was that it affected the entire land of Cube along with those within it. A few gestures enabled Mard Geer to activate Alegria, a curse that could turn Cube into Plutogrim. Plutogrim, as described by Mard Geer, was a gigantic prison. Sticky projectiles move through the building when the curse is placed, which entrap anything or anyone that it comes in contact with. Beings who are trapped do not die but stay in a suspended state until they are freed out. 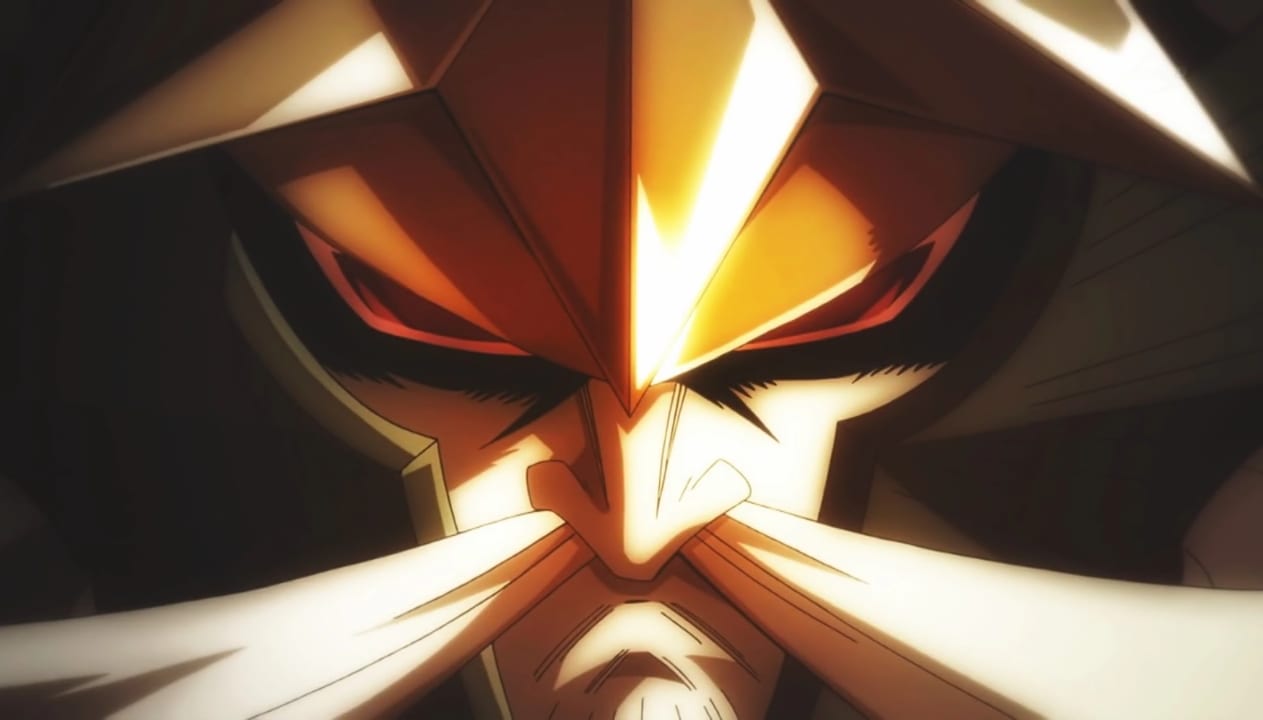 The Celestial Spirit King was a skilled wielder of sword magic. Galaxia Blade was a passive technique as compared to Meteor Blade, a destructive power. This technique is purely offensive that can cause a wide range of damage in a single hit. The spell is activated by hitting the sword on the ground. The impact of the attack is linear and causes a huge explosion. Although Madar Geer escaped his Meteor Blade attack during their battle, the damage caused by it cannot be left unseen. It is said that this power can cut through rock and water alike, making it one of the strongest attacks in Fairy Tail. 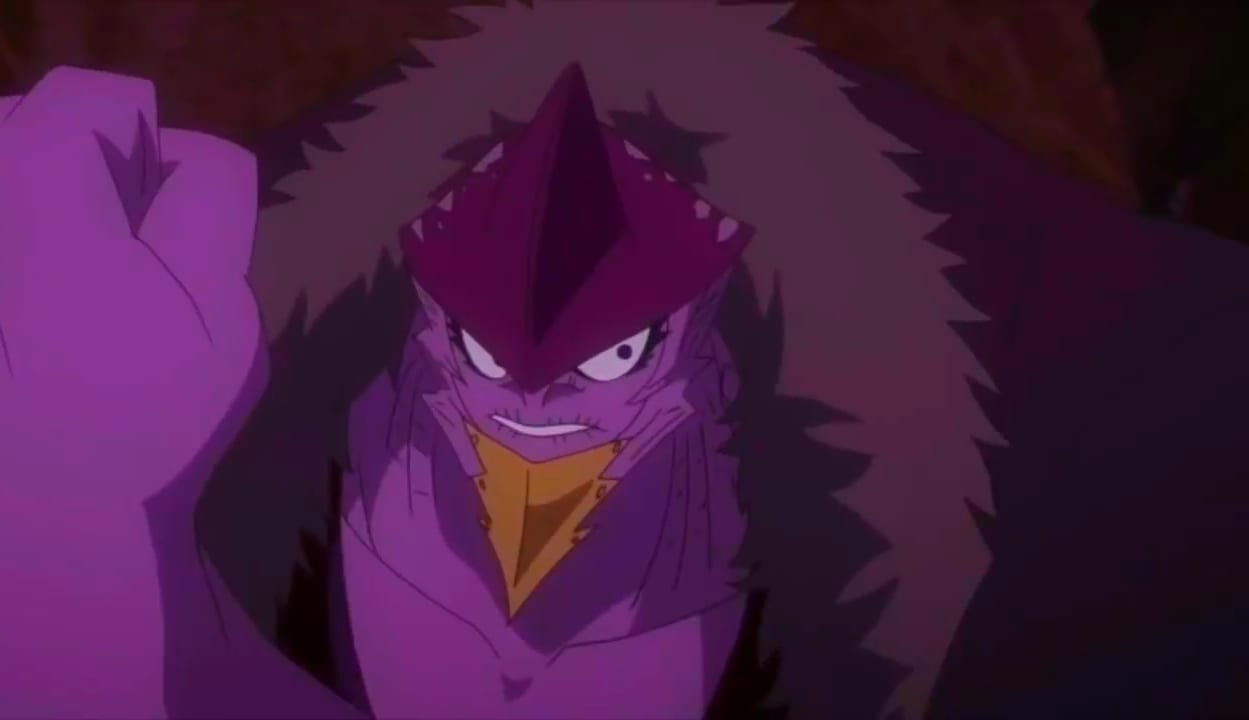 Torafuzar can summon waves of black water using the Tenchi Kaimei curse. Using these waters, he floods an area to any limit he wishes to. The waters give him an advantage of speed and agility due to his physical structure but at the same time hinders the movements of his enemies. The black water summoned through Tenchi Kaimei is highly poisonous. It can kill anyone who swallows it within five minutes. Moreover, using magic under the black water also becomes nearly impossible. Although it is not as flashy as the other attacks, Tenchi Kaimei is a very strong attack for its deadly form and lethal consequence. 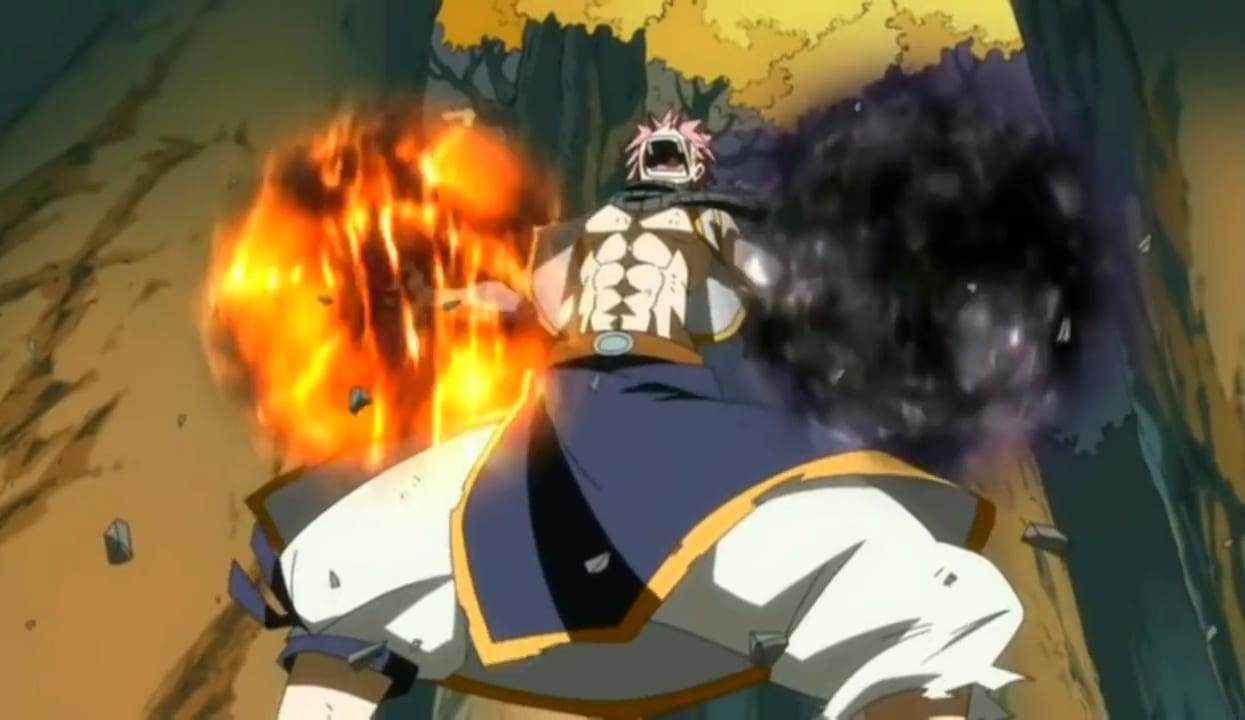 This is a spell that is very similar to the Fire Dragon’s Brilliant Flame. However, the impact and range of this attack are stronger and wider. Natsu’s right hand wields the usual Fire Dragon Slayer Magic flames, but the left hand wields black flames. When both these flames meet, a giant explosion is caused. This explosion destroys any object in its way and pushes the enemy far away with a thrust all the while inflicting injuries. 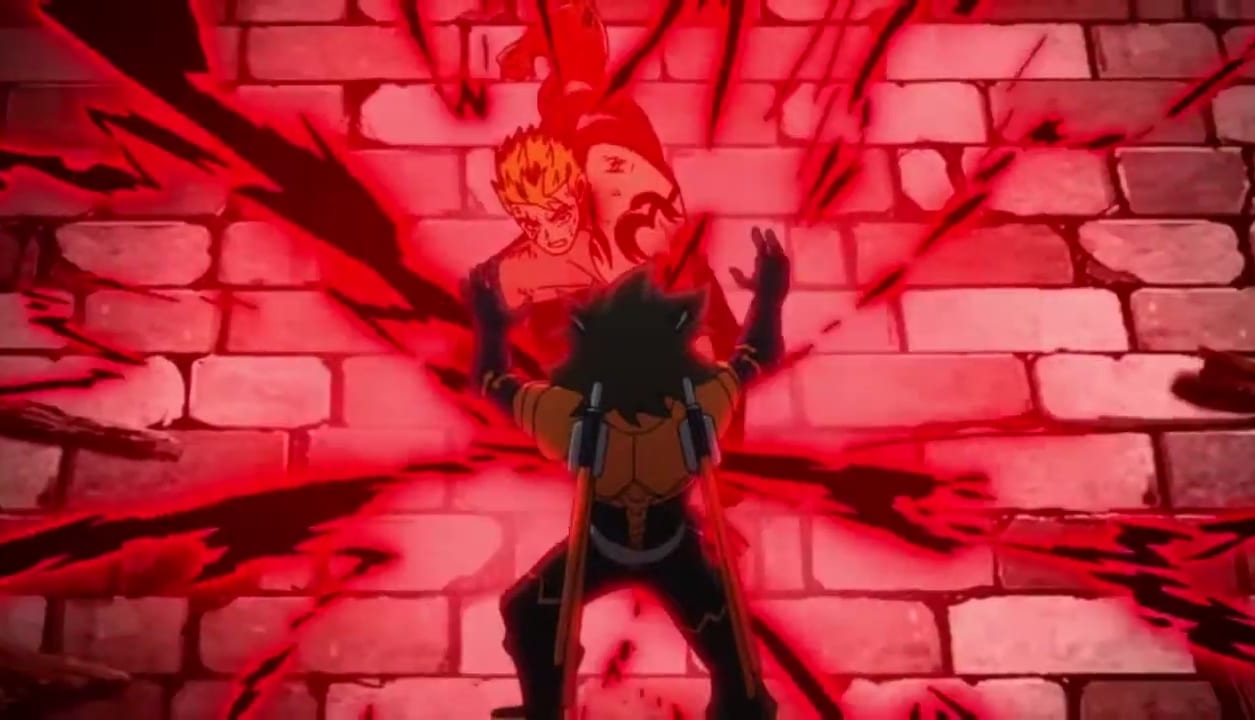 This ability can only be used by a Lightning Dragon Slayer. The lightning produced during mode goes beyond lightning. They are red, more powerful, and lethal. Using Red Lightning Dragon Mode, Laxus killed Wall Eehto, a Machias who was known to be immune to lightning attacks. When Laxus is in this mode, he can use the Megaton: Red Lightning spell. The spell enables him to execute an overpowered punch while his fist is covered with red lightning.

Dragon Roars are generally overpowered attacks that have made grand appearances in the show. They can easily be noticed as one of the strongest attacks in Fairy Tail. The impact might vary in various wielders. Some of the strongest wielders of The Dragon Roar are Natsu, Igneel, the five Dragon Gods, and of course, Acnologia.

Also Read: Will There Be A Castlevania Season 5?