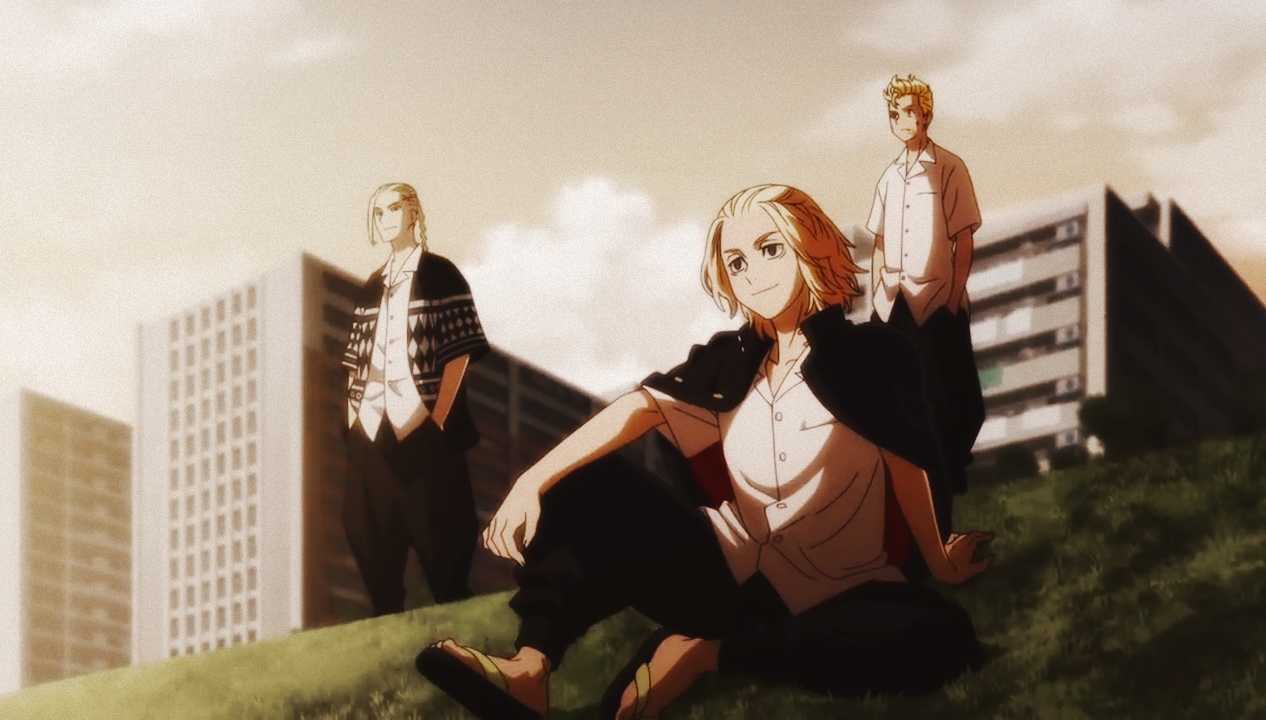 Tokyo Revengers is a 2021 anime adaptation of the manga by Ken Wakui. Produced from Liden Film studios, the anime premiered its first episode on April 11, 2021, at 02:08 hours JST. Roughly 24 hours in, and the anime had already gained a 7/10 MAL rating. The anime was rated by approximately 4000 people at this point. Tokyo Revengers is taking over fans with its very first episode. It could potentially be one of the most talked-about anime of the season by the time the series comes to an end. The anime has been licensed for international broadcast by Crunchyroll and Muse Communication. Tokyo Revengers Episode 1 is available on their media for streaming.

Tokyo Revengers is no ordinary plot. When Takemichi hears about the death of his middle school girlfriend at the hands of the Tokyo Manji gang, he can only barely remember her face. But, when he is almost in the face of death, all he can think of is her. Tokyo Revengers tracks the story of Takemichi Hanagaki as he jumps through time leaps to save his ex-girlfriend, Hinata Tachibana. A mysterious thriller, Tokyo Revengers, is based on the 44th Kodansha Manga Award-winning series for the Shounen category.

The first episode that premiered on Sunday introduces the viewers to the basic concept of the anime briefly. Spring of 2021 will present an interesting Sunday for all anime lovers.

Spoiler Alert: This content has many spoilers from the first episode of Tokyo Revengers. Please don’t scroll ahead if you do not want any spoilers of this series.

Tokyo Revengers, episode 1 opens with a news report about a mass murder caused by the Tokyo Manji Gang. Two people who were killed in this accident were Naoto Tachibana and his sister Hinata Tachibana. Takemichi, the person watching the news, realizes that he had dated this girl back in Middle School, but all he remembers about her are only very few facial features, like her short hair and smile.

Now in his mid-twenties, Takemichi lays low and works at a record store. He lives in a small apartment all alone, where he is often screamed upon by his landlady. He is meek and also bullied by younger kids. The last time he had a girlfriend was back in middle school, and he is still a loner and a virgin.

Thinking about his motionless life, Takemichi is waiting for the train. It is just then that someone pushes him on the tracks. He watches the train in front of him, about to crush him. Moments before his so-called death, Takemichi has visions of Hinata. Next, when he opens his eyes, Takemichi finds himself on a train. He meets four people that he recognizes as his middle school friends. He is now dressed in baggy pants and an unbuttoned shirt, and he wears his dyed hair spiked upwards. Takemichi had leaped through time and has reached twelve years in the past, to when he was a middle-schooler. 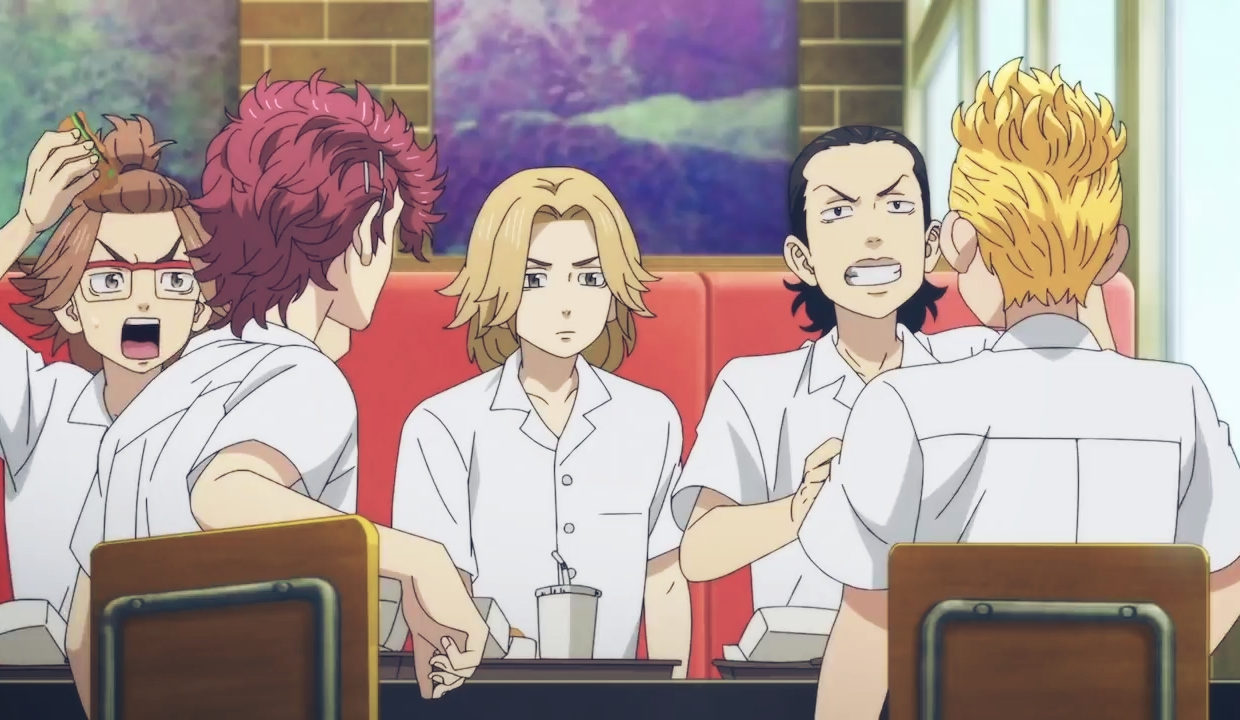 Takemichi Hanagaki with his friends.

Unable to grasp the situation, he follows his friends Atsushi, Makoto, Yamagishi, and Takuya. He sees himself in a mirror and is shocked by his outlook. He remembers that he was a delinquent back in middle school. Takemichi and his friends go to a restaurant to eat, where he is met with more news. From the conversation between the other four, he understands that they are about to pick a fight with another school. Atsushi points out that they have the upper hand since Takemichi’s cousin is the leader of the third-year delinquents. Confident, they go to the park to fight the second year of Shibuya Third Mid.

When It All Began

Takemichi and his friends wait at the park, but no one shows up. When they are about to leave, they are shocked when the third years of Shibuya Third Mid show up. Scared, they take up Takemichi’s cousin’s name but realize that even his cousin is only a pawn of the group. He had been showing off in front of Takemichi with lies. Takemichi remembers his past as he and his friends get beaten up by the third year as his cousin watched. 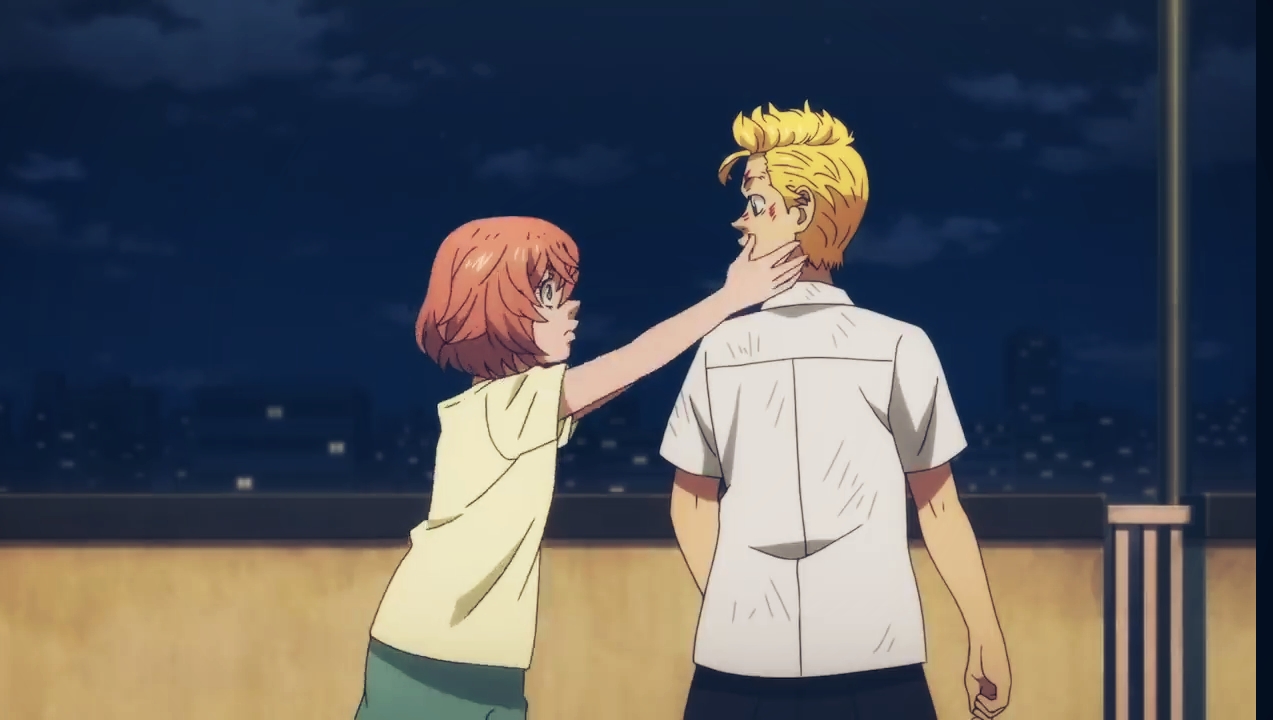 Takemichi meets Hinata after his fight.

After being defeated, they walk back, bleeding. However, Takemichi remembers about Hinata and runs to the school to find her address. Once he finds out where she lives, he goes to meet her. He breaks out in tears as he sees her as he is overwhelmed by all the feelings he had for her. Unable to understand, Hinata consoles him and scolds him lovingly for fighting. After a short tearful conversation, he takes his leave.

After leaving Hinata’s house, Takemichi comes to a park where he reflects upon his life. He notices three delinquents bullying a younger boy. Already frustrated, Takemichi heads their way and beats them up. He breaks the bottle they had brought along with them. Scared, they run away.

He is almost about to move away, but he is called by the boy who was getting bullied. He tells Takemichi to dispose of the bottle because the shards of glasses could hurt someone. Agreeing to the possibility, he wraps it in a piece of cloth and throws it in a bin. The younger boy introduces himself as Naoto Tachibana. Immediately taken in by surprise, Takemichi talks to him about Hinata. Out of sheer desperation to save her in the future, he tells Naoto about the time leap. Takemichi asks Naoto to save himself and his sister from their upcoming fate, 12 years later. He tells him to remember the date of 4 July 2017.

Naoto is shocked but believes him. Takemichi asks him to promise him that he will save his sister. As they shake hands, Takemichi is taken back to 2017, to his present. He finds himself on a hospital bed. He asks a cop about how he was saved. The cop points out to a person in a grey suit. On being asked, he introduces himself as Naoto Tachibana. Naoto reveals that he is alive only because of Takemichi’s warning in the past. He studied hard and became a detective, and also saved Takemichi. However, he was unable to save his sister. 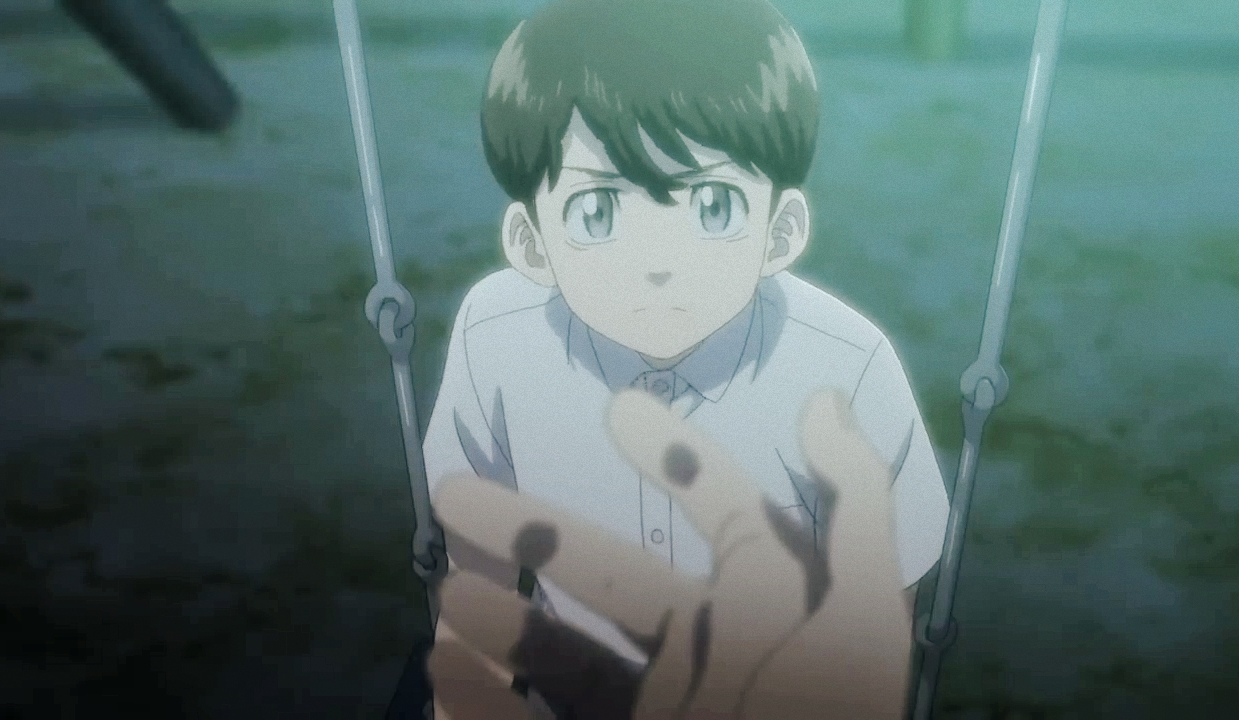 Tokyo Revengers Episode 1 ends with Naoto asking Takemichi to help him save Hinata as the latter agrees.

Also Read: The Way Of The Househusband Season 2 Confirmed On Netflix

Tokyo Revengers’ anime adaptation is telling the story straight. The anime presents a very raw presentation filled with simplicity yet with so many enthralling events that coming back for another episode is going to become a Sunday routine. Here’s an honest review of the anime based on different criteria.

The art style of the anime is sharp, as the plot demands. There is nothing too cute nor too bright. For a brutal look into the violence, the anime has a lower light setting that helps the mood set in. I loved how the character art of Takemichi as a delinquent and Takemichi as a lost adult differed on so many levels. All the delinquent characters of the anime have been given their strokes of scars that make it an all the more realistic experience. The female lead, Hinata, is not exactly the cutest character, nor does she have big breasts. She only looks like a genuine middle schooler with a very lovable personality.

The animation has nothing to complain about. There aren’t many scenes that require a high-definition CGI. However, scenes such as Takemichi’s time leap are portrayed with efficiency.

The opening, Cry Baby by Official HIGE DANDism, is energetic. But, what I loved, even more was the ending theme, Koko De Iki o Shite by Eill. The OSTs in the anime fit well with scenes, and I can see them being discussed heavily in the future.

The anime has a very pure and raw plot. It is engaging, and the pace is well balanced. Tokyo Revengers Episode 1 gave an insight into the protagonist and his thoughts. He was not made a hero of justice until he remembered his past. The story of Takemichi feels relatable, for we have all run away from things, good or bad, and eventually forgotten about them. Events in this episode occur in disciplined order, giving the viewers enough time and space to understand what is happening.

It was barely five minutes in, and I could already sense that I wouldn’t want to drop this anime after this episode. This is not just a story of delinquents fighting for turf, but of a person wanting to redo everything to save just one person. Despite the simplicity, Tokyo Revengers Episode 1 will keep you on your toes. It is a promising anime and has the potential to be one of the highest-rated anime series of Spring 2021.