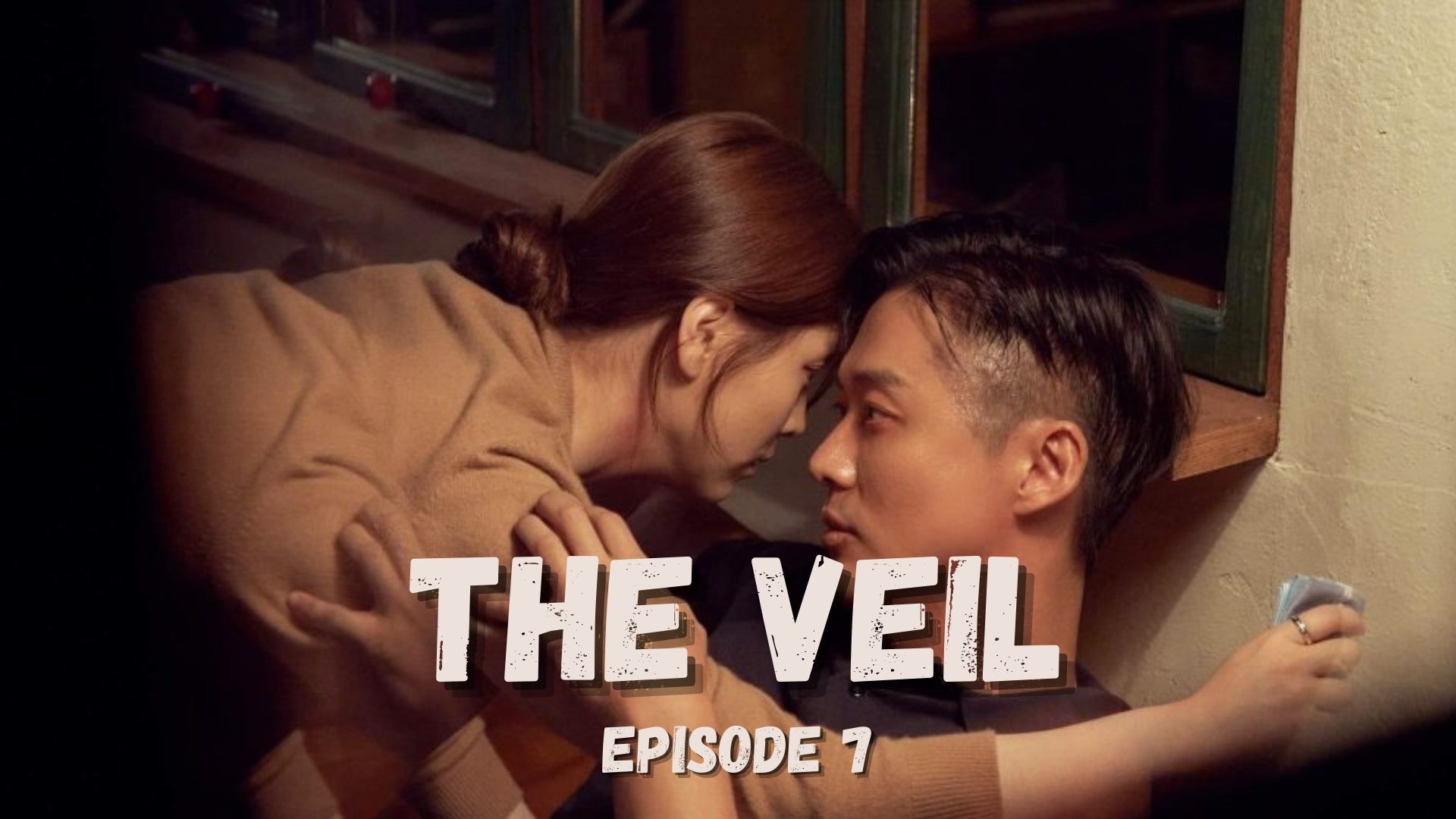 The Veil Episode 7 is coming on the screen soon! The action-suspense The Veil kdrama is ranking has risen in the recent week. The plot has thickened with so many new twists and turns! Every episode is like a new riddle for viewers. The last episode’s ending has left viewers speechless with its mind-twisting surprise. It shows Je Yi turning against Ji Hyuk! Is she really his ally, or is she a foe? It was really unexpected to see her new side. However, the upcoming episode will clear the audience’s doubt. Besides, Namgoong Min’s acting has improved so much. Every action scene, each facial expression, and emotion, he has displayed is remarkable. Viewers are looking forward to watching his outstanding performance even in future episodes.

The latest episode shows the truth behind Su Yeon shooting case. It is mind-blowing how the writer has come up with such an excellent plot. While the whole NIS, even Director Kang, believes that Ji Hyuk was the one who shot Su Yeon, only Je Yi keeps faith in him. It also reveals a different side of Director Kang. It is tough to differentiate foes from allies at this point. Everyone is turning against Ji Hyuk, who can not even trust his own memory. Ji Hyuk and Je Yi work together and discover the Deep Fake technology that helps to prove his innocence. Furthermore, reporter Jung Ki Sun proves another new clue that is linked to Chang Chun Woo, Su Yeon, the internal spy, and a new organization called Sangmuhoe. Therefore, the coming The Veil Episode 7 will be bringing another detailed yet ambiguous story twist!

What Happened In The Veil Episode 6?

Episode 6 begins with Je Yi finding out that Ji Hyuk is the one who shot Su Yeon. Director Kang even goes all way to the higher authority to get his hand on Ji Hyuk’s case. Deputy Commissioner Do and Deputy Commissioner Lee get into a dispute over it. Eventually, Director Kang takes over the matter and goes to bring Ji Hyuk to NIS. On the way, they talk about the past where Ji Hyuk finds that Director Kang did not even ask him whether he really shot her or not. That makes him suspicious of Director Kang. Ji Hyuk remembers Su Yeon’s last words before she shot that he should not trust anyone, especially Director Kang. Therefore, before they can reach, Ji Hyuk fights and runs away. But not before talking with Director Kang about his distrust and leaving his gun behind. 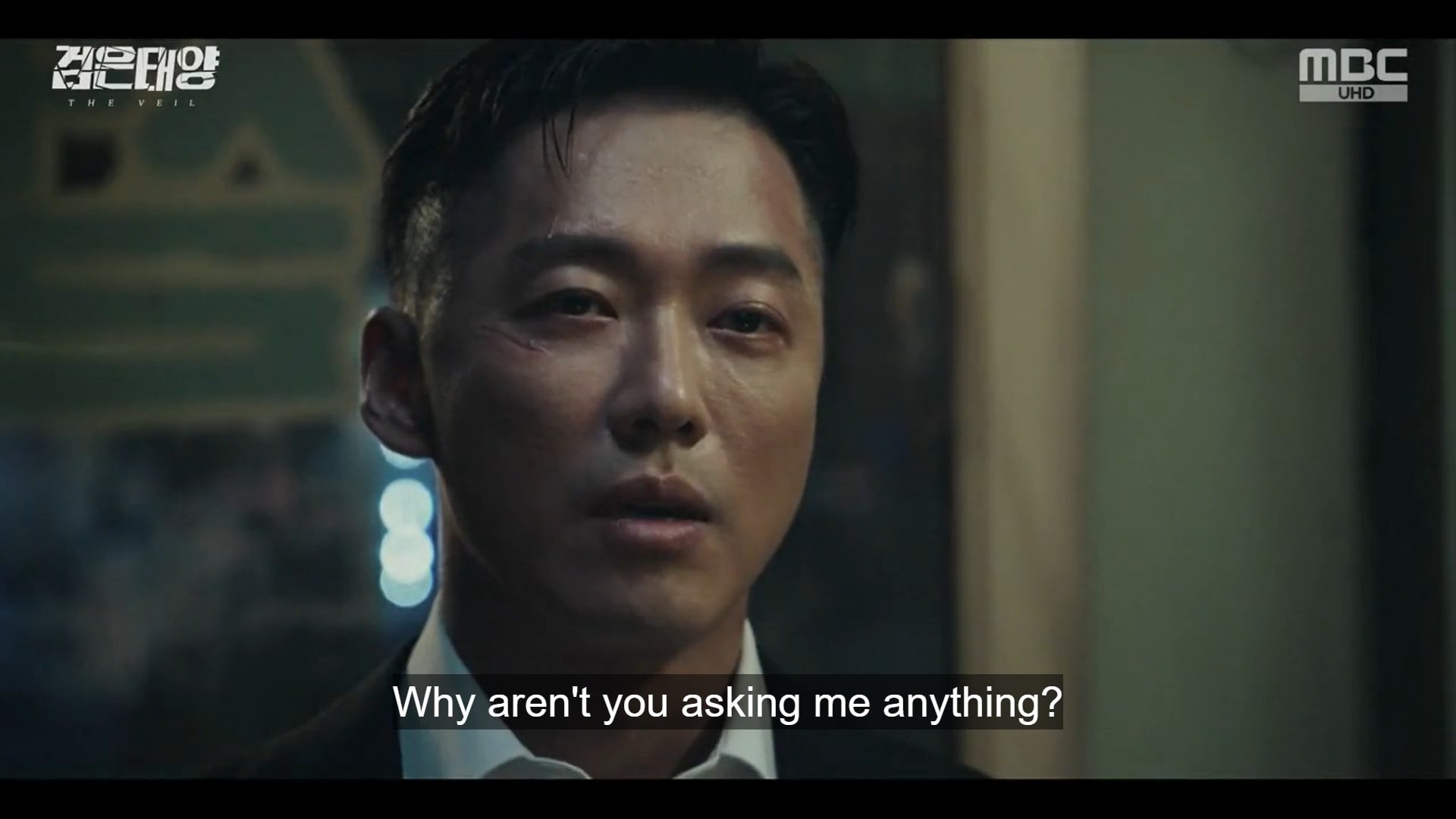 Therefore, when Chief Han reports to Deputy Commission Do about Director Kang getting shot by Ji Hyuk, it makes no sense. It becomes clear that Director Kang injures himself, and that incident even gives him the right to shoot Ji Hyuk. Injured Ji Hyuk goes to Je Yi, who helps him out and even stitches his wound. At her home, he discovers Je Yi’s real identity and her motive to join NIS. The two share a tender moment there. They both become teammates once again to clear his name. Meantime, Deputy Commissioner Lee decides to let reporter Jung Ki Sun go. They collected a lot of evidence against her but now that they are letting her go so easily sounds more suspicious. The coming The Veil Episode 7 will show how Ki Sun’s secret report turns the whole story into a new direction.

Meanwhile, Deputy Commissioner Do receives a report on Ji Hyuk’s innocence but decides to keep it on hold to see how Director Kang and Ji Hyuk face off each other. Someone leaves a note on Je Yi’s desk that has written an internal project number containing a Deep Fake technology report. She learns that it is the new clue to clear Ji Hyuk’s name. However, the aide is still unknown. Ji Hyuk finds the guy who shot Su Yeon, leading him to another significant clue, Bae Jong Soo. He is the creator of the tool that could change people in the video. He was the chief researcher of the project Deep Fake. They also find that reporter Jung Ki Sun was working on a North Korea report, and in that regard, she was supposed to meet Su Yeon. However, before they could meet, Su Yeon got shot. 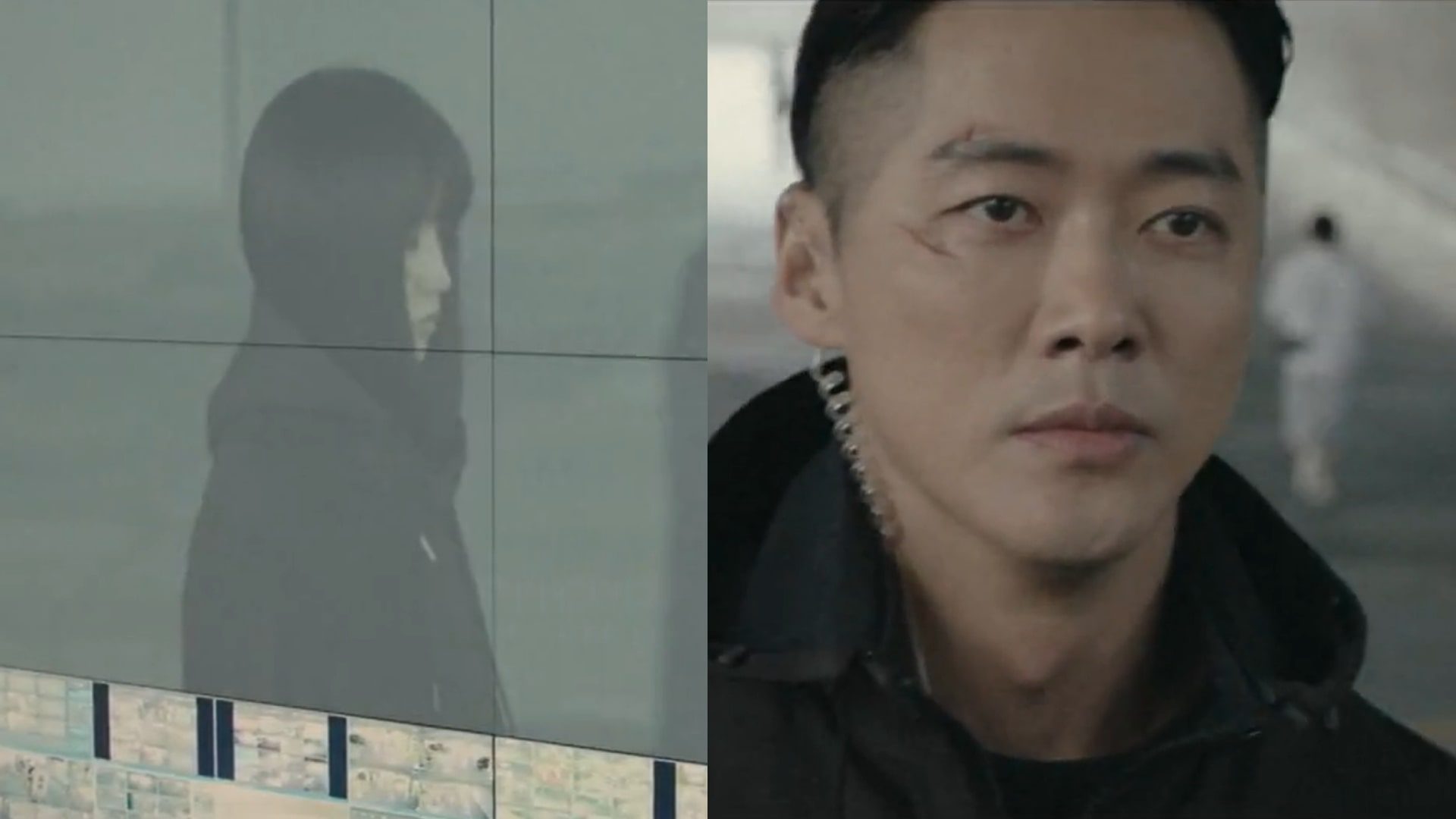 After learning NIS letting Jung Ki Sun go, Ji Hyuk negotiates with Director Kang to let him meet her. Our duo Ji Hyuk and Je Yi team up to get Jung Ki Sun first, and at the same time to prove his innocence, he uses deep fake technology that results in him look like Su Yeon. It becomes solid evidence that the CCTV footage showing him carrying the gun is fake. Someone has sabotaged it. Afterward, Ji Hyuk learns from Jung Ki Sun about Sangmuhoe. A year ago, when the list of agents leaked in China, she investigated that case leading her to a private organization of the retired agents from NIS called Sangmuhoe. Therefore, The Veil Episode 7 will focus on finding more clues about this newly informed Sangmuhoe organization.

Furthermore, the informant was Chang Chun Woo. Ji Hyuk becomes sure that Chang Chun Woo was behind Su Yeon’s shooting incident. Ye Ji received a new photo showing Chung Chun Woo was the one who leaked the agent list. With that, Ji Hyuk meets him. They get into fights, and it becomes clear that Chang Chun Woo is part of Sangmuhoe. In exchange for that information, Ji Hyuk asks for the original CCTV footage that shows the real shooter who shot Su Yeon. Moving on, Ji Hyuk forwards the footage to Je Yi for checking where she informs him that Su Yeon has regained her consciousness.

He goes to the hospital to see her but finds an empty bed. Thus, there he falls into another trap set up by Director Kang. The episode highlight is when he asks Su Yeon, only to find that she passed away a few hours ago! The episode ends with Je Yi deleting all original CCTV footage given by Ji Hyuk, which can prove his innocence. Is Je Yi as innocent as she appears to be, or is there another hidden layer? Therefore, it is going to be another intense thriller ride in The Veil Episode 7!

The Veil Episode 7 will be released on 8 October 2021 at 10 pm KST on the MBC TV channel. The first episode of The Veil premiered on 17 September 2021, and the last episode will drop on 23 October 2021. Until now, six episodes have been broadcasted. The Veil is scheduled for 12 episodes. The kdrama has completed its half journey. Each episode runs for a 70-75 min duration. Every new episode of The Veil kdrama releases weekly on Friday and Saturday on MBC TV.

Preview of The Veil Episode 7 is already dropped! Another week full of suspense-thriller and action is on the way. The preview is another spoiler of the upcoming episode. Ji Hyuk will get back to NIS. It seems there will be a new case to provocate NIS. That will create havoc in the organization leading to Deputy Commissioner Do resigning from her post. However, it is highly unlikely to happen. Even though her motive has not been cleared yet, she seems to help Ji Hyuk to some extent. Even in the upcoming episode, she will hand him the same case that has caused an uproar among NIS agents. 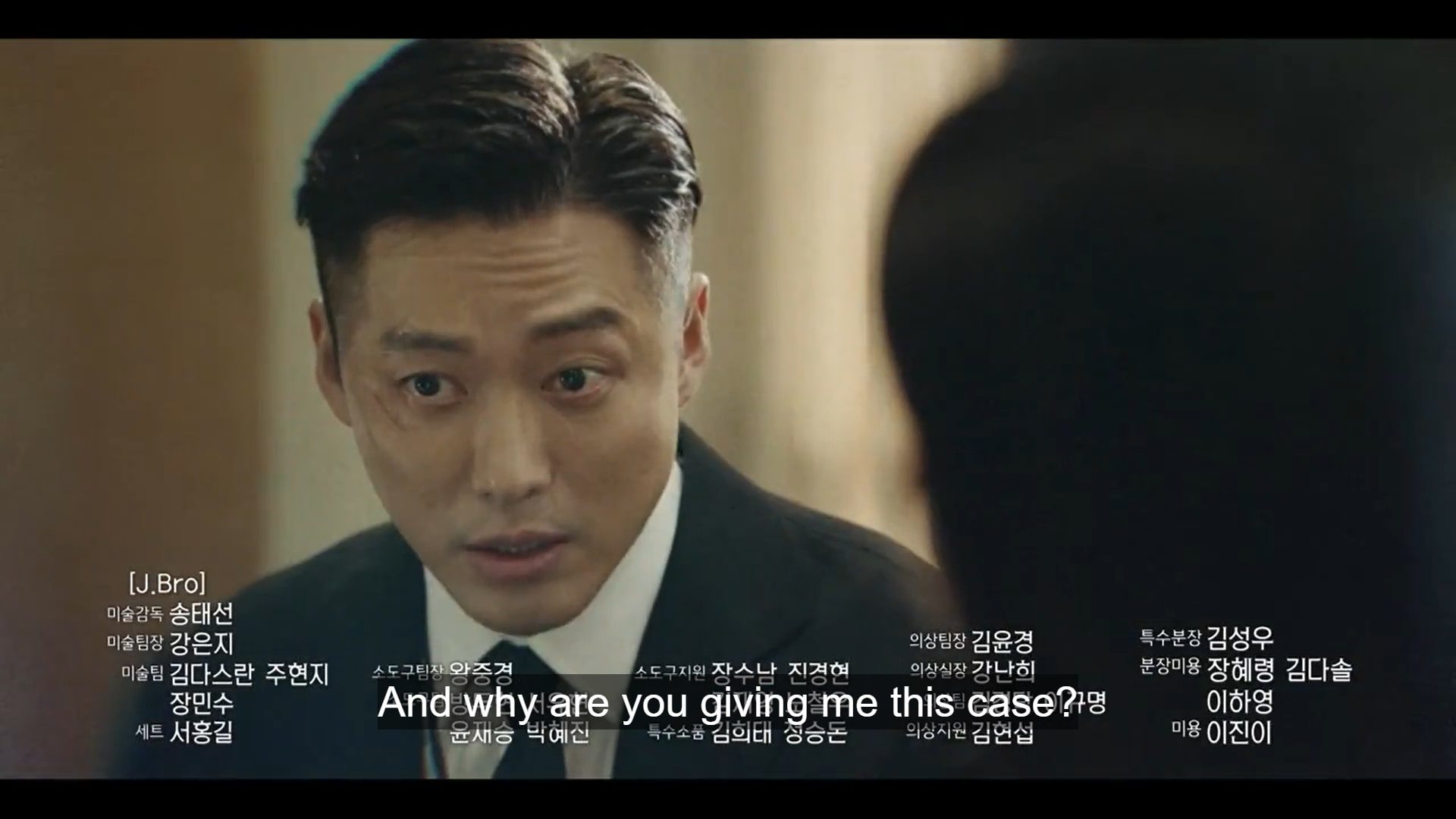 The preview also shows Je Yi wheeling out someone at the hospital. There is a high chance the person may be Su Yeon. After all, Su Yeon is one of the main leads. So, her death may be a façade planned by Director Kang to arrest Ji Hyuk. Ji Hyuk and Je Yi will also look for the head of Sangmuhoe. Overall, The Veil Episode 7 will be another story twister with new puzzles for its audience!