The Showdown Between God Candidates Begins In Platinum End Episode 12 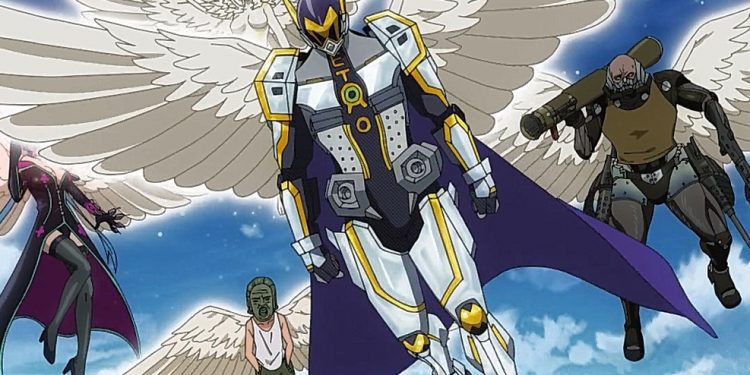 Platinum End Episode 12 reveals the last man standing between God Candidate and the Final Boss Metropoliman. The war between God Candidates began after Hajime Satomi took Mukaido’s family hostage. Hajime gave Mirai and Mukaido hard time until Saki arrives. Saki’s arrival changed everything since Hajime believes he was born to meet Saki. He told Saki that she was cute and his world had been sparkling ever since she arrived. In Platinum End’s latest episode, Hajime compliments Saki’s sexy body and thanks to his parents for bringing him to this world.

He believes that it was destiny to meet with Saki, and he feels like he has to confess his feeling. Metropoliman notices that something is wrong with Hajime and asks him why he is not doing his job. Hajime admits that Metropoliman gave him power, but meeting with Saki made him discover the reason to live. He told Metro that he wanted to use the restroom. Metro agrees, and Hajime talks with Saki in private. Hajime told Saki that he loved her when she arrived, and he felt like he was heaven. Saki asks him if he can do what she will tell him.

Hajime agreed, and Saki told him to rescue the people inside the barrier since they are important to her. He realizes that he met someone important and will do everything Saki told him. Ravel is glad that their plan has worked. Hajime realizes that he had once met a girl as beautiful as Sak. But he couldn’t propose, and Saki gave him a chance, and all he had to do was rescue Mukaido, Mirai, and Mukaido’s family. Hajime jumps up and breaks the barrier, and Metro gets angry that Hajime is braying them.

Mukaido asks Hajime why he is trying to act like a hero. Hajime reveals that he is doing it for the sake of love. Metro can’t believe that Hajime is in love, and he tries to convince and remind him that he is his servant. But Hajime replies that he is ex-servant and he can leave freely. Metro told Fuyoku and Batsuma to join him since Hajime would ruin their plans. Hajime manages to make a hole, and Mirai sees that they could break a barrier. Batsuma arrives and lands a powerful blow on Hajime.

Metro, Fuyoku, and Metro’s Angel arrives and remind the two that it is 4v2. But Mukaido and Mirai break the barrier and Mukaido revesla that it is 4v4. He asks Metri to let his family go and settle things, but Ravel fuels the fire by saying that Metro is coward and knows that Metro will allow Mukaido to send his family away. Metro told Mukaido to send his family away, and he would find him waiting to settle the score. Saki sent Mukaido’s family and daughter to a safe hotel and told them why they fought with Metropoliman.

Saki returned to the battlefield, and Metro told him they could pick up where they left off. Ravel told Saki something, and Saki told Mirai that trick would give them an advantage during the battle. Metro feels that he will win since none of the God Candidates can pierce his suits and remind them he is the Final Boss. Batsuma battles with Hajime, who is protecting Saki with his life. The trio pulled that trick, and Hajime used his sword to cut Batsuma’s hands. Batsuma hits the ground and wonders why his arm is missing.

Platinum End Episode 12 will be released on 24 December 2021. Hajime told Batsuma that he could go to the doctor and get his arm attached. Nasse is glad that they have beat the first Evil God Candidate. Metro told them why they could not win that battle and let Mukaido’s family leave the scene. Fukuyo reveals a special drug that can melt humans. Let’s look at Platinum End Episode 12 official details.

Also Read: The Journey of Legendary Markers In The Labyrinth Ends In SAKUGAN Episode 12.