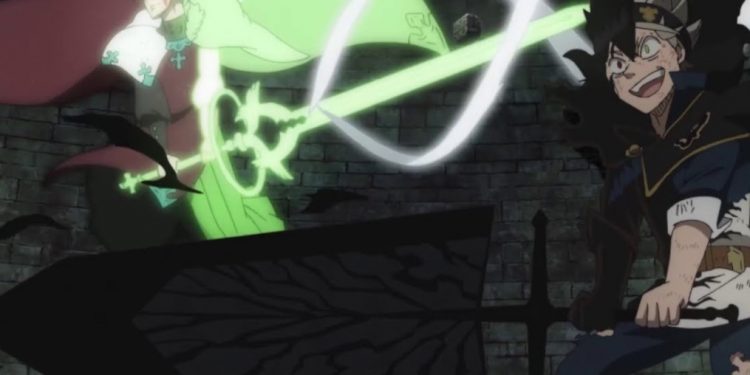 Black Clover Chapter 318 reveals Supreme Devil Lucifero’s manifestation. The Black Bulls have taken down the King of Supreme Devils after Asta unleashes Devil Union: Fourth Sword Demon Slasher to kill Lucifero and stop him from emerging in the human world. But they had no clues that Lucifero would rise again. Lucifero falls after Asta slashes him and the Magic Knight moves back, but he is yet to die. However, Yuno joins the battle with the help of Mimosa and uses an arrow against Lucifero. The recent chapter of Black Clover Yuno releases Spirit of Euros to get rid of Lucifero. Asta saw that from a distance, realizing that his rivalry had arrived.

Asta knew that Yuno would arrive in time like this, but he was happy to see Yuno playing an essential role. Everyone was relieved, thinking that they had ended the destructions of Supreme Devils. The Black Bulls inside the Ultra Giant Bull were excited to see that they had won the battle. Yuno was impressed to see Asta’s Devil Union Mode. Meanwhile, Patolli cachets Captain William, who was falling, working if the Captain is okay. But he was glad when Willaim talked to him. Langris realizes that Yuno stole the party after landing a final blow.

The building of Spade Kingdom has been destroyed, and a few parts of Spade Kindom Castle remained standing. Captain Yami is safe on top of the flowers that Charlotte created. He is impressed that his kids have done a great job. When they surround him, he calls them idiots, and they shed tears of happiness. The Black Bulls are glad that Yami is okay. On his human form, Vice-Captain Nacht realizes that the battle is over. Charlotte, Nozel, and Ril also gather and notice that the Captains are alive.

At the Spade Kingdom Castle gate, the citizens and warriors of the Spade Kingdom notice that their homes have been but that the war is over. One of the higher-ups talks about building a peaceful; country.  They are glad that they have stopped the Devils who have been ruling their Kingdom for many years, and now they are free. The families and knights help each other and the wounded ones while reuniting with their families. But they had no clues about what was behind them.

They heard a voice asking them why they were still here instead of escaping. One of the higher-ups notices that it’s a devil with horns and wonders why since they have killed all the Devils. Nacht saw that realizing that it is Supreme Devil that resides in the Second Level. The citizens moved away, but it was too late. Natch realizes that it is  Lucifero’s manifestation and yet to complete. A vast dark cloud covers the Spade Kingdom and citizens’ fears for their lives. In that dark cloud, a hand of the Supreme Devil emerges and points at everyone around.

He orders them to fall on their knees. But they all collapse when he withdraws his hand. Asta and Yuno saw that and decided to go there to face the new version of Supreme Devil. Asta ride Demon Slayer Sword at full speed and reach the scene before everyone gets killed. Everyone is unconscious on the ground, and the new version of Supreme Devil felt something coming toward him. But the guy approaching has no magic, and Asta gets near the Supreme Devil. The two feel each other’s powers as they get ready to fight.

Black Clover-Chapter 318 will be released on 3 January 2022. The manga delayed Black Clover 318 and returned on the date above; Asta made eye contact with Supreme Devil with four Horns wondering what happened. The Supreme Devil notices Asta, realizing that Asta is the boy who almost killed Lucifero before he manifested. The Supreme Devil is Lucifero’s manifestation and calls Asta the brat who stopped his manifestation. Let’s look at Black-Clover-Chapter 318 official details.

Who will become The God in Platinum End?