Streaming giant Netflix never fails to disappoint fans when it comes to adding some “out of the box” movies into the collection. Recently, the newest thriller movie The Platform has made its debut on the streaming service, and let us just say the movie is not like any other movie that you might have seen in a while. Director Galder Gaztelu-Urrutia brings forward a structured idea of food and at what length can one go to reach the very top of this endless pit.

The movie opens in a prison-like setting that is referred to as The Vertical Management center, viewers are quickly introduced to university student Goreng who has willingly volunteered to be a part of this prison to get his degree. On the other hand, we see an old man Trimagasi who although reluctant at first, seems to start talking to Goreng as they will be sharing the prison for a while. What will catch your attention in the first few minutes into the movie is when Goreng asks Trimagasi about what exactly do people do in this ‘hole’ to which he replies that it is all about eating!

The Platform: What Is The Netflix Thriller Movie All About?

As the movie proceeds forward, little do viewers know that these people will soon take up cannibalism to survive, and ‘eating’ gets a whole new meaning as the plot proceeds. The story revolves around a rather bizarre yet very structured idea of the platform stopping at every level for a short period and those on the lower level will get to eat whatever is left by the residents of the upper level. By the time the platform reaches the very bottom of the pit. the amount of food left is almost non-existent. 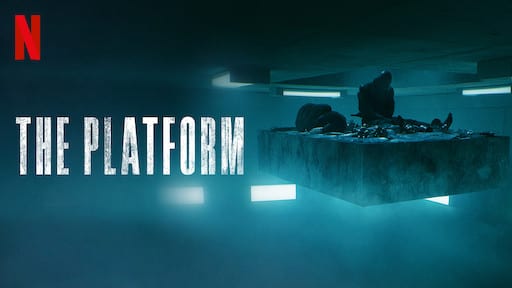 Fans are soon introduced to another character named Miharu who frantically looks for her child, this child’s existence is highly questionable in the movie. While Goreng and Trimagasi strike up an unconventional friendship that will not quite stand the test of time, by the time the movie reached its very end the two become one as if Trimagasi becomes Goreng’s alter ego and guides him to the path of tyranny.

The Director Talks About How The Movie Is Not Strictly About Capitalism.

Note how he constantly refers to Goreng as his ‘little snail’. The director not only presents gruesome scenes of cannibalism, manslaughter but says it all when Sr. Brambang says that “the administration has no conscience”. A special mention goes to a particular scene in the movie where while Goreng and Baharat try to descend at the bottom, they are showered with money! The man living above them had bundles of money with him and it eventually remains useless.

The whole concept of money not buying you food when you need it the most to escape says a lot about society and how the whole structure works. By the time the movie reached its climactic end, Goreng makes a shocking revelation as he discovers a little child on level 333 who is finally revealed to be Miharu’s lost daughter!

The Platform: The Ending Explained Of The Newest Thriller Flick.

In the end, both Baharat and Goreng realize that there are more levels than they counted. As Baharat almost loses his sanity while saving the Panna Cotta as “the message”, however, they reluctantly give the Panna Cotta to the child. Baharat soon succumbs to his injuries while Goreng wakes the little girl up and takes him on board as they descend at the very bottom of the endless pit. As the two successfully managed to reach the very bottom of the pit, Trimagasi appears in Goreng’s hallucinations and asks him to leave the child alone as  “the message requires no bearer”.

While the idea that the girl is, in fact, ‘the message’ is firmly established, she soon ascends on top of the platform in the end. As the girl ends up from where it all started it seems like no one on the platform survived the endless loop of the capitalist monstrosity. However, capitalism is not the running idea of the plot but ideas of racism, administrative failure, and how survival can force one to undertake tyrannical measures.

With Goreng’s future highly questionable at the end of the movie, some might say that he might have lost his sanity on the way and the only person who guides him through is Trimagasi. Goreng, could not bring about any significant change but rather became one with the vices themselves. Goreng’s situation at the very end is similar to what happened to the popular character Don Quixote, who also loses his sanity at the end. (Note how he reads the book to Trimagasi throughout the movie.)

Francesca Farago TikTok: Who is She Dating Right Now?

Who Is Marcus Dobre Dating, Is The Youtuber Still Single?

Who Is Marcus Dobre Dating, Is The Youtuber Still Single?

Anyone who has seen The Office series in the UK knows about Stephen Merchant's remarkable contribution to this series. British...

The King's Affection Episode 9 will soon be gracing us with sweet moments between Da Mi and Jung Ji Woon....

Where is Survivor Season 16 Filmed? All To Know About The Locations