The actresses who play impactful and popular roles in 'The Penthouse' drama appears on the 'Knowing Bros' variety show. Jin Ji-Hee, Choi Ye-Bin, and Kim Hyeon-Soo talks about their roles on the show and their past career. 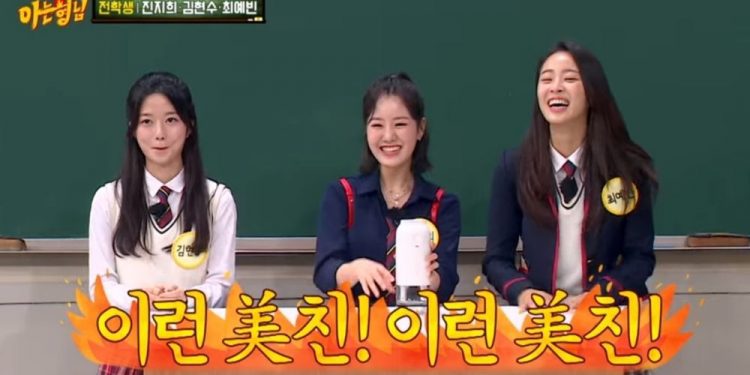 ‘Knowing Bros’ is a South Korean variety show that has been going on since 2015. The permanent cast members who act as the students of the MOAM school are Kang Ho Dong, Lee Soo Geun, Seo Jang Hoon, Kim Young Chul, Kim Hee Chul, Min Kyung Hoon, Lee Sang Min, and Lee Jin Ho. Other than Lee Jin Ho, all the actors are working presently on the show. In ‘Knowing Bros’ season 6 episode 41, ‘The Penthouse’ actresses Jin Ji-Hee, Choi Ye-Bin, and Kim Hyeon-Soo make an appearance.

Before getting to the activity segment, the ‘Knowing Bros’ cast is curious about the roles that the actresses that they play in the drama. To quench their curiosity, they ask a lot of questions and play a game. The game is who will get the fastest text reply. No one other than Ye-Bin gets a text. Then Ye-bin reveals that it is her birthday and calls So-Yeon on the show. This makes her emotional, and she starts to cry.

In the previous episode, very special guests are invited to the ‘Knowing Bros’ show. If you are a fan of the South Korean drama ‘The Penthouse,’ you will enjoy this episode. As on the set of ‘Knowing Bros’ season 6 episode 41, Jin Ji-Hee, Choi Ye-Bin, and Kim Hyeon-Soo make an appearance. One of the cast members of ‘Knowing Bros’ Sang-min played a cameo role in ‘The Penthouse’. This is a proud moment for the cast, and they start the episode by congratulating him. The MOAM high school students discuss all of their favorite and the scariest scenes in ‘The Penthouse’ drama.

After the transfer students hand in their application, they discuss where everyone lives. A new section of residency is added for ‘The Penthouse’ cast. They are not supposed to write the penthouse, but they do. While disclosing the area she lives in, Ye -Bin feels very shy and decides to only mention the province. While shooting for the drama Jin Ji-Hee, Choi Ye-Bin and Kim Hyeon-Soo got a lot of calls from their friends asking for the preview of the next episode, but no one gave up any detail.

As everyone is talking about the show, Ye -Bin receives a reply from someone, and she reveals that it is her birthday today. Everyone cheers her and sings the birthday song for her. Then the actress calls So-Yeon and tells her that she is on ‘Knowing Bros’ right now. However, talking to her friend brings up emotions for Ye-Bin, and she starts crying. The actresses compete on who will get the fastest reply, and Jin Ji-Hee and Kim Hyeon-Soo feel dejected, seeing that they have not received any reply. But the cast does not forget about Hyeon-Soo and talks about her 10 years long acting career. Also, Ji-Hee is the girl who played the character of the Fartty butt when she was 11 years old.

After shooting a memorable episode with ‘The Penthouse’ actors, ‘Knowing Bros’ will invite the popular girl group ‘aespa’. In the upcoming episode, we will see Winter, Giselle, Ningniine, and Karina make a special appearance as transfer students from the dorm. The aespa members showcase their dancing and singing skills. Keep looking forward to knowing the aespa stars better in a fun surrounding.

The ‘Knowing Bros’ Season 6 Episode 41 release date is 4th January 2021. In the previous episode, the actresses from ‘The Penthouse’ showcase their strengths and have a lot of fun with the ‘Knowing Bros’ cast. As for the upcoming episode, we will see new students transfer to MOAM school. The next episode will be filled with laughter as aespa members make a special appearance.

Also Read: Who Are The ‘Red Velvet’ Members Dating? Find Out All About Their Dating Lives in 2022

When is S.T.A.L.K.E.R. 2: Heart of Chernobyl Releasing? Everything to Know About the Adventure Game