Demon Slayer took over the anime fandom like a storm. But was that even a surprise? Even before the anime was created, it had already stirred a ruckus among manga readers. Gotouge’s Demon Slayer held a unique plot. There were so many new things that made fans excited to see something more than just a generic shounen. One could tell how much fans were loving it after seeing the manga sales. Everyone was dreading to know what happens next and to know more about the characters. As per the counts of April 2021, manga sales have reached up to 30 billion yen. New concepts, fan theories started developing on forums as the story intensified. One of the most common questions that people have is: who is the strongest Hashira in Demon Slayer and who is the weakest?

The manga has already concluded its end. Whoever has gone through the manga will have their own views on how the ranking of the Hashira should look like. Every Pillar has their strengths, weaknesses, backstories, and fan following. People use different bases to make this judgment. Every Hashira is strong which is why they even have that spot in the first place. Yet, it is a bit clear that there is a difference in strength among them too.

The ranking I’ll be putting together is purely based on the manga. So, here’s a ranked list of the nine Hashira based on their strength.

Spoiler Alert: The list has some major spoilers from the Demon Slayer manga. So, if you do not want the series spoilt for you, I recommend that you stop scrolling right away! 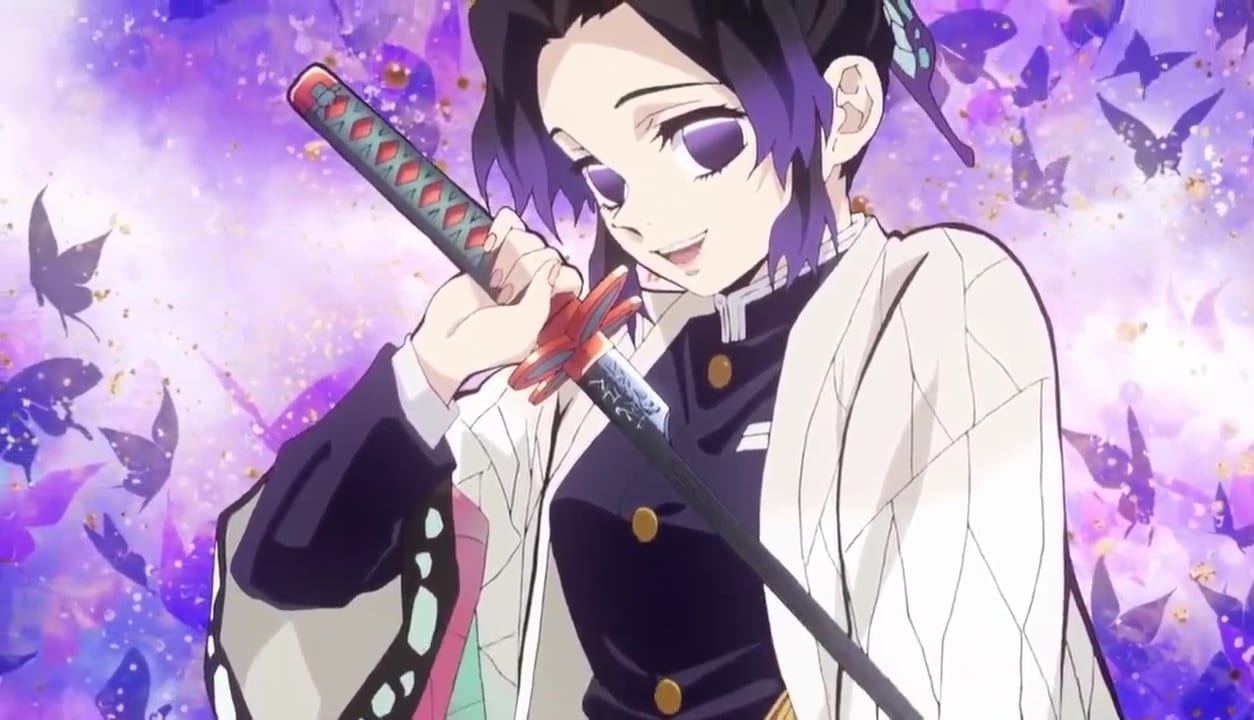 The Insect Pillar, Shinobu is not weak. Yet, she is comparatively not as strong as the other Pillars in terms of brute strength. She has a miniature structure as compared to the others. She has also been indicated as the only pillar who can slash through a boulder.

But, for anyone underestimating Shinobu, there’s a lot more to her. She might not be able to cut through a boulder but she is also said to be the only one able to pierce through it. The structure of her sword is designed as per her abilities, which is working with poison.

Shinobu is the smartest Pillar with amazing strategic abilities. Her plans of killing Douma had been pre-arranged months before. Moreover, the upper demon Douma also acknowledges her speed. He calls her the ‘fastest Hashira’s he has seen.

Shinobu’s poison extracting and analyzing ability was extremely strong. Her pushing and thrusting abilities are stronger than any other Hashira on the list. In fact, it is even faster than the Piercing raindrop of the breath of water.

Also Read: One Piece 1012 Reveals Luffy vs Kaidou One on One

The snake breathing techniques are derived from the Water breathing techniques. This makes snake breathing techniques look a bit similar to their original inspiration. In season 1, Iguro punches Tanjiro which temporarily causes him unable to breathe. Iguro later in the manga also fights upper moon 4 Nakime alongside Mitsuri and also defeats her. In this fight, we are given a quick insight into Iguro’s fighting style. He is not one to jump off at an enemy and fight recklessly. He would rather stay cool and fight after figuring out his opponent. Also, he manipulates his enemy to think he is dead to find the right moment to strike.

Towards the end, Iguro shows impressive abilities again during the final battle against Muzan. He protects his allies and even manages to hit Muzan a couple of times. In the end, he also gains his demon slayer mark. 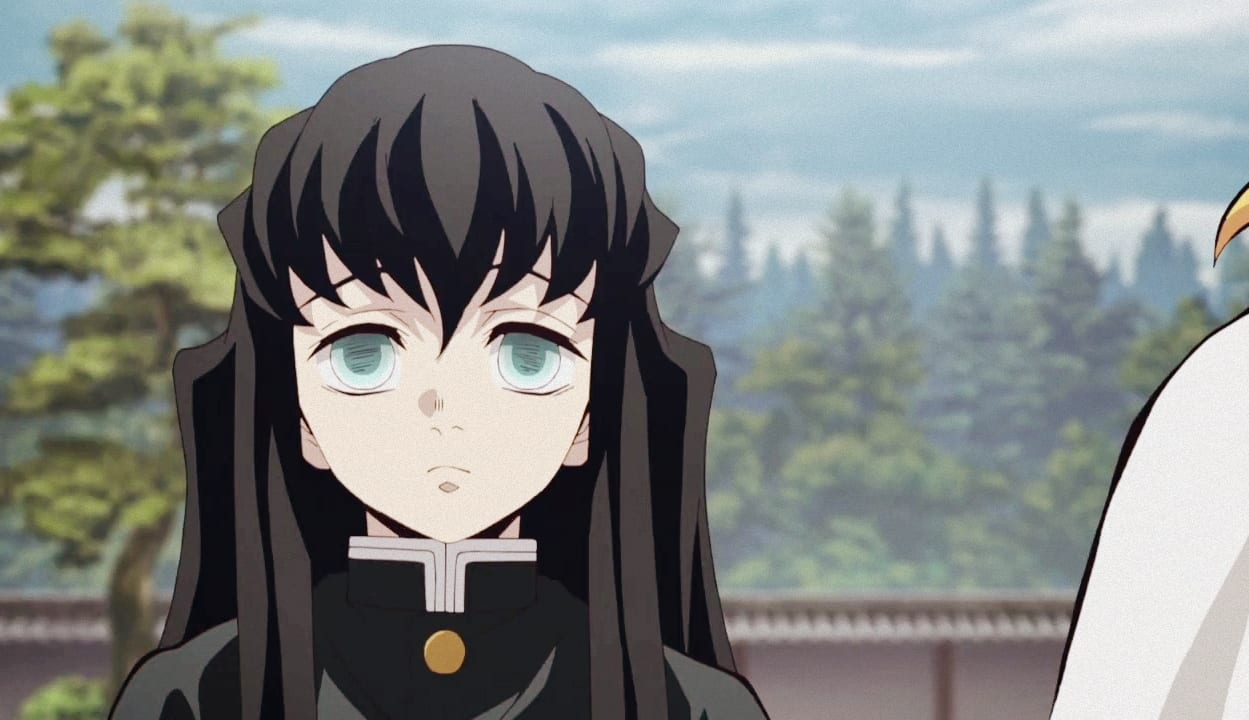 Muichiro Tokito, the mist pillar, stands at the 5th rank of the strongest Hashira in Demon Slayer. He was the youngest Hashira, who largely lacked experience which probably makes him rank behind even if he could have grown stronger over time. However, seeing the final fight of Muichirou Tokito would deeply impress anyone. He unlocks his mark and even gains access to the see-through world. It is all the more amazing to think that he gains access to it completely by himself.

He fights valiantly against the upper moon 5 and wins. In every fight, Muichirou shows extravagant power despite his young age. Once again, Muichirou could have grown exceptionally strong. He was a prodigy but he lacked focus. He would often get distracted and made tactical mistakes that cost him a lot in his battles. To have gained a mark at 14 itself shows his unpolished strength. 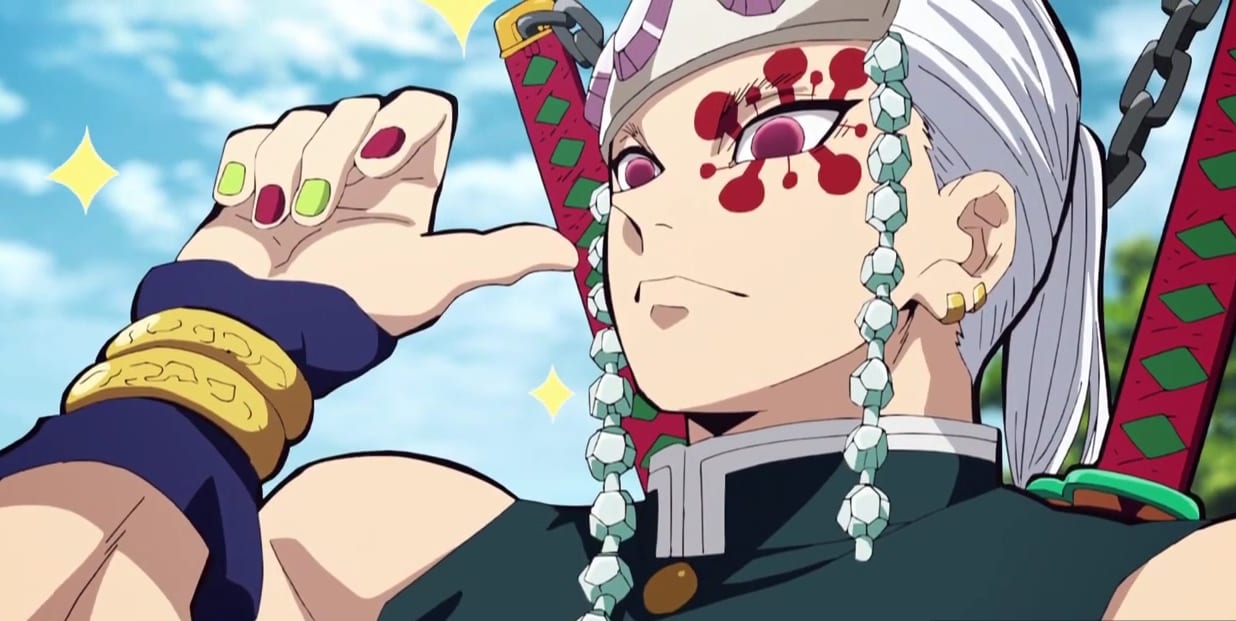 Uzui’s brute strength has been ranked second by Goutuge. He has incredibly strong arm strength that earns him this rank. Uzui Tengen fought against two Upper moon demons, Daki and Gyutarou. He also made use of bombs and weapons as such that made him a fairly good fighter. Uzui was a strategically smart fighter during battles. Shinobu was intelligent academically. But, Uzui’s tactics made him intelligent in the warzone. He studied his opponents to their most minute habits and counterattacked his enemies.

During his fight against Daki and Gyutarou, he fought all the while he was poisoned. He also showed a strong poison resisting ability, even if it was temporary.

However, Daki and Gyutarou were comparatively weaker than most of the other demons that the other Hashira fought. Muichirou might be a bit stronger than him, but, he is extremely careless that causes him to rank below the sound pillar. 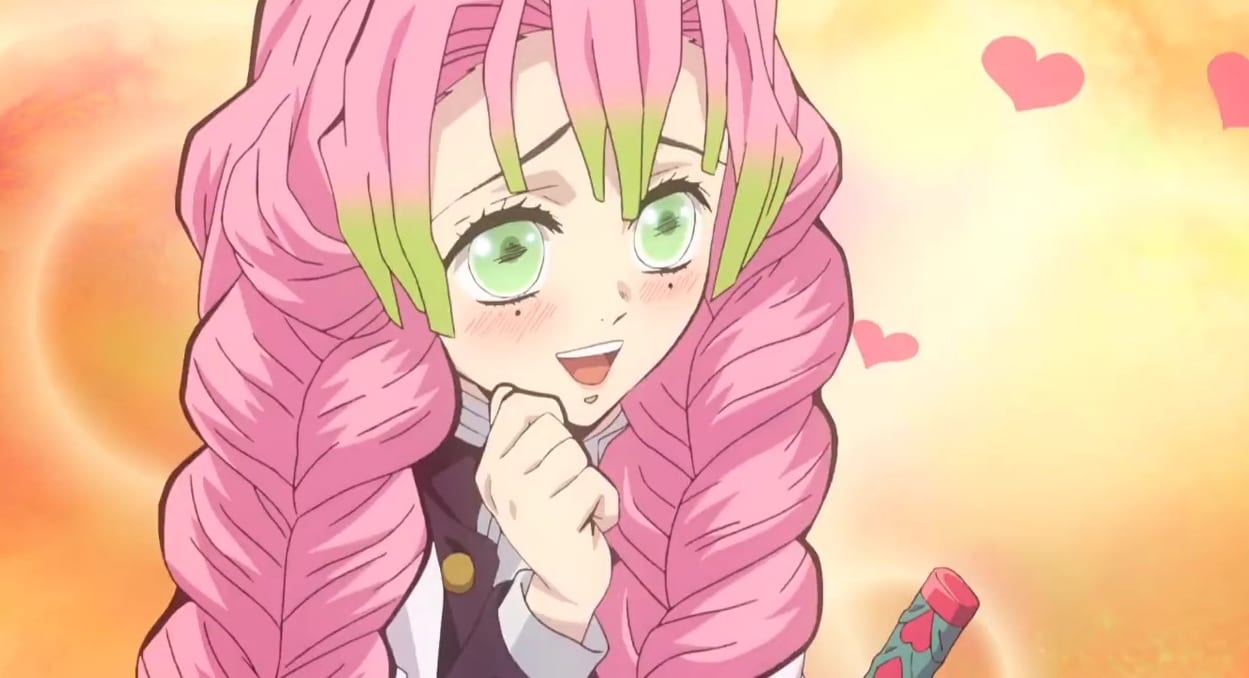 Mitsuri’s backstory gives us the first hint that she was not to be messed with. She was so strong that she intimidated anyone. Even her ideal man is someone who would be stronger. Kanroji Mitsuri looks strong at first glance. Truth is, she is multiple times stronger than what she looks like, according to the manga. Kanroji Mitsuri has incredible physical strength. In her battle against Nakime, she shows her brilliant fighting form. She is incredibly flexible and allows her to fight very efficiently. Additionally, her reflexes are on point that gives her an upper hand in dodging Nakime’s attacks.

In the final war with Muzan, she tears off his tentacles using nothing but her bare hands. If that is not a sign of being one of the strongest Hashira in Demon Slayer, then what is?

Also Read: Death of Escanor in Seven Deadly Sins – How it happened?

Seeing the events in the manga, it feels fair to rank these three characters, Shinazugawa Sanemi, Tomioka Giyuu, and Kyujurou Rengoku together. So, they are more or less equally strong. However, if an order is really required, here is how I feel it would be. 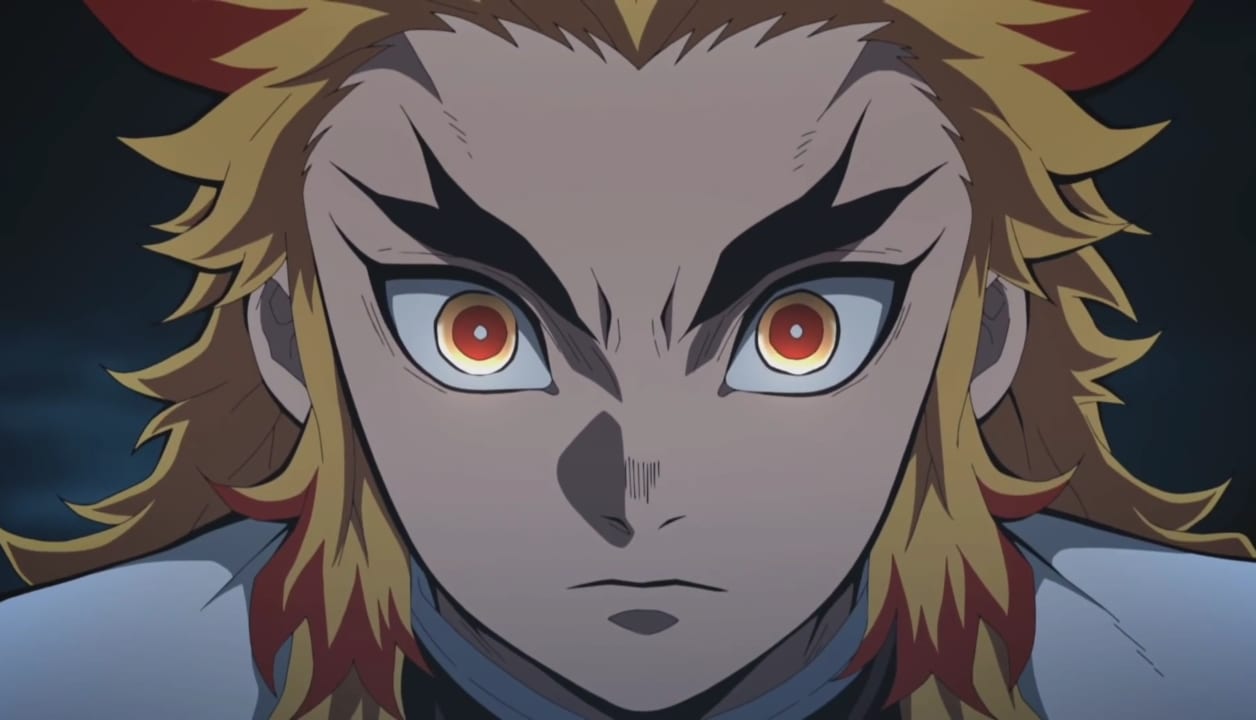 Rengoku was an ultimate MVP in the Mugen Train arc. There is no reason to doubt how strong Rengoku is. He first assisted in defeating Enmu and then has one of the most epic and tragic battles with Akaza. His combat abilities were beyond the top during this fight. The fact that Rengoku does not unlock his mark yet can overpower Akaza at times is commendable. He loses in the end, but there are factors to be considered. Rengoku had a hole in his stomach during his duel and yet, he manages to fight an upper moon.

Rengoku also gains Akaza’s respect for his fight. He had polished skills and raw talent that made him one of the top 5 strongest Hashira in Demon Slayer.

It makes it easier for me to judge the strength of Giyuu and Rengoku because they have both fought off the same enemy, Akaza. The upper moon 3 was one of the highest-ranking demons. Rengoku was already exhausted and injured during his fight and thus we know that he never fought Akaza at his full potential. Moving on to Giyuu’s fight against Akaza, he fights alongside Tanjiro but it does not mean he has it any easier. He also survives Akaza’s Blue Silver Chaotic Afterglow, his final move. Even after his battle with Akaza, he goes on to fight against Muzan.

Giyuu is strong for not just his strength. He is calm during his battles and has always shown a clever sense of fighting. His water-breathing form gives him a smooth and sharp advantage over his enemies that make yet another strong Hashira out of the nine.

Sanemi and Giyuu seem equally strong, concerning their stats. Sanemi excels in points that Giyuu doesn’t and vice versa. I find them equally strong but if I really had to pick one, I would say Sanemi is stronger even if by a little. First, Sanemi’s wind breathing technique, unlike Giyuu’s, is aggressive. During his fight against Kokushibo, we get to see most of his ability. In the beginning, he does not have the mark, yet he shows an impressive sight. Later, he gets fatally injured and thus becomes a major asset for his battle against Muzan.

Additionally, Sanemi’s fight against Kokushibo was a 1v1 which he survived, which in itself gives out a lot to think about regarding Sanemi’s strength.

Also Read: How Old is Kakashi Hatake in Boruto? – New Powers and Fights

Giyuu, Sanemi, and Rengoku are somewhat on the same scale if we look into their stats with only a few ups and downs. These ups and downs are the only few criteria that helped me rank them as above. 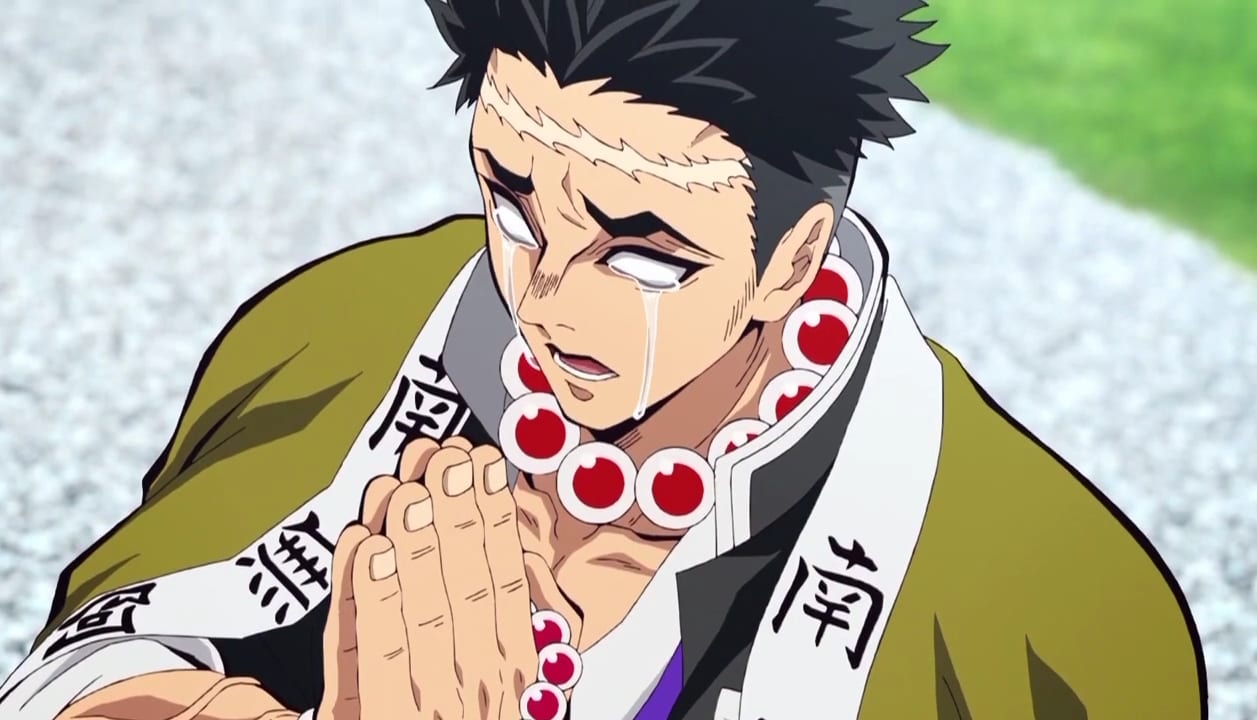 Gyomei stands at number 1 in the list of the strongest Hashira in Demon Slayer. Even after being blind, he has shown an incredibly strong side. As a matter of fact, it has been addressed multiple times in the manga that the Rock Pillar is the strongest. Besides his brute strength, he is also very strategic and aware of his surroundings. His strength is further acknowledged by the Upper moon 1, Kokushibo too.