Everything has turned upside down after knowing the family he trusted, devoted all his life has brought him nothing but misery! Therefore, Lee Bang Won is preparing for his first attack on the two-faced stepmother, Queen Kang. 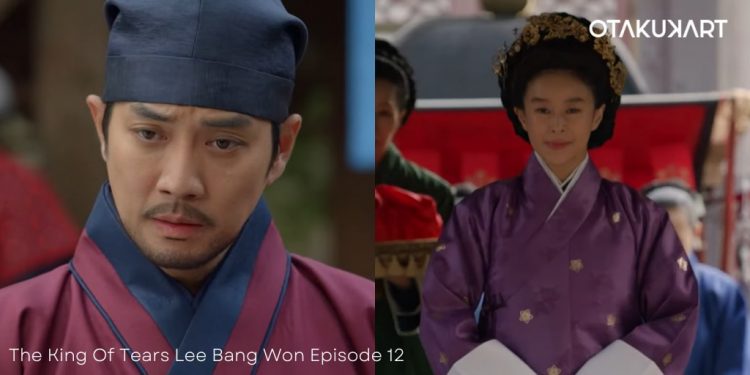 The King Of Tears, Lee Bang Won Episode 12 is coming soon with its thrilling twisted turn! Now that the war has been declared from both sides, it will be interesting to watch who attacks first and who falls first! However, it is heartbreaking to witness the agony Lee Bang Won goes through for the people, only to get abandoned by them eventually. The drama has portrayed the inner battle and torment which turns Lee Bang Won into King Taejong. It is the bitter reality of history to witness Lee Bang Won fighting against his family to take over what’s supposed to be his.

Initially, Lee Bang Won wanted to fight for his mother and brothers. However, with his brothers’ turning their back to him, he is left alone in this pit of power struggle. He doesn’t deserve to go through all that pain just because of his one mistake of killing Master Poeun. But, it seems King Taejo has already become blind to find the real purpose and suffering his son went through before eliminating his last obstacle. It is all thanks to Lee Bang Won that Lord Lee sits on the throne. However, Queen Kang has already created walls in the father and sons relationship. Therefore, The King Of Tears, Lee Bang Won Episode 12 will show how Lee Bang Won ruins his stepmother’s wicked plan!

What To Expect In Episode 12?

In The King Of Tears, Lee Bang Won Episode 12, we will witness how Lee Bang Won carries out his plan and fight against his father. What did the Lee Brothers earn after going through all those ups and downs? Nothing but an abandonment. Although King Taejo has forgiven them for the mistake they didn’t even commit, the damage has already been done. All brothers, except Lee Bang Won, will forget all that happened. However, Queen Kang may not lay down that easily. After all, she has already made her son the Crown Prince. Thus to eradicate her plan, Lee Bang Won will build his military power. He has already targeted his first comrade, who is none other than one of his father’s trusted companions, Jo Young Mo!

It will be thrilling to watch how Lee Bang Won’s wife, Lady Min, will take her revenge on Queen Kang. She can never forget the moment when she had to beg in front of Queen Kang to save her husband’s life. With Lee Bang Won, Lady Min and her family will join this political war. Although Lady Min’s father Min Je seems to hesitate, he will overcome it and become another unbreakable aid to his son-in-law.

Lastly, it is about King Taejo. It will be enjoyable to know his reaction after witnessing his once close and caring family falling into a pit of endless hatred and slaughter. He is the main reason for Lee Bang Won’s hostility and the downfall of his family! Although they haven’t voiced it out, half of his royal subjects are already on Lee Bang Won’s side. However, Lee Bang Won will create his own political power. The loss is massive, but he is ready to take over everything which belongs to him! Therefore, The King Of Tears, Lee Bang Won Episode 12 will narrate another thrilling chapter of this enthralling historical saga!

The King Of Tears, Lee Bang Won Episode 12 will be released on 16 January 2022 at 9:40 pm KST on the KBS1 channel. Now that Lee Bang Won known his enemies, he is ready to take them down and snatch everything that belongs to him. However, it will bring another mental breakdown knowing the enemies are none other than his own family. The suffering he goes through before going rampant is getting closer. Therefore watch every new episode of The King Of Tears, Lee Bang Won every Saturday and Sunday to find how Lee Bang Won destroys his stepmother’s scheme!

For domestic viewers, The King Of Tears, Lee Bang Won is broadcasting on the KBS1 network at 9:40 pm KST. Afterward, the episode will be available to watch on Wavve (accessible only in South Korea). On the same day, it will be out at 7:40 am in the USA, 12:40 pm in the UK, 11:40 pm in Australia, and 6:10 in India. The kdrama is also streaming on Kocowa and Rakuten Viki with English Subtitles. Keep note that Kocowa is accessible only in South and North America.