Lee Seung Gye has turned his back to his son after deeply getting hurt by their disobeying act. Now he has even forbidden them to enter the palace. How will the Lee brothers win their father's trust? 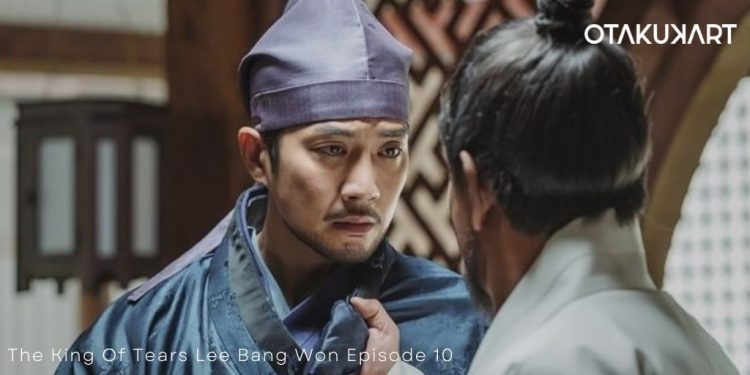 With its twisted plotline, The King Of Tears, Lee Bang Won Episode 10 is releasing soon! Finally, the moment has come when Lee Seong Gye has been crowned and established the first phase of a new dynasty. This is the moment we all and the Lee brothers were waiting for. However, their fates have changed because of only one decision. Lee Bang Won killing Master Poeun was necessary but, for that, he has paid a huge price of losing his father’s trust, affection. However, Lord Lee, aka King Taejo, has failed to notice the real intention behind Lee Bang Won’s cruel act.

Therefore, the upcoming episodes will turn this historical political tale into an intense bloodbath! It will be interesting to witness different layers of Lee Bang Won’s life. Besides their drifted father-son relationship, their stepmother, Lady Kang, also plots against the Lee brothers. After all, her greed to be the queen and let her offspring be the future king is not hidden from viewers. It will be a matter of time before Lee Bang Won and his brothers understand their stepmother’s evil deed. But the main question will be, how Lee Seong Gye will react after witnessing his once-close family falling down into pieces? Thus, The King Of Tears, Lee Bang Won Episode 10 will reveal how sons try to earn their father’s lost faith in them!

What To Expect In Episode 10?

The King Of Tears, Lee Bang Won Episode 10 will be leading this historical political thriller towards the upcoming slaughter, which will change the fate of the Lee family. Finally, each member of the Lee family has begun to show their true colors, especially Lady Kang and Lady Min. Now that Lee Seong Gye has accepted his fate and become the king of a new dynasty, Lady Kang has also sat on the queen’s seat. For that purpose, slowly but surely, she has dropped the seeds of mistrust and hatred in King Taejo’s mind (Lord Lee) about the Lee brothers. However, the Lee brothers will not accept this easily, especially Lee Bang Won.

Although his father forbids them to enter the palace, Lee Sang Won will use every means to reach out to his father and show him their sincerity. Conflicts will happen between the Lee brothers with their father losing trust. However, it will be thrilling to watch where this conflict leads them. Will they successfully overcome it together? Or will they fall apart and blame each other for their father’s disappointment?

The King Of Tears, Lee Bang Won Episode 10 will be released on 9 January 2022 at 9:40 pm KST on the KBS1 channel. The drama has become more interesting with the recent dramatic change of the story. Lord Lee, aka King Taejo, has turned his back to his elder sons who murdered his beloved comrade, Master Poeun. However, the Lee brothers are adamant about winning back their father’s truth. How will they achieve it? Therefore, watch new episodes of The King Of Tears, Lee Bang Won every Saturday and Sunday to find out where this intense political conflict of the Lee family heads.

For domestic viewers, the drama is airing on the KBS1 network at 9:40 pm KST, and later, it will be available on the online streaming platform called Wavve (only in South Korea). As for the other countries, the episode will be out on the same day at 11:40 pm in Australia, 6:10 pm in India, 12:40 pm in the UK, and 7:40 am in the USA. The King Of Tears, Lee Bang Won kdrama is streaming on Kocowa (accessible only in South and North America) and Rakuten Viki with English Subtitles for international viewers.