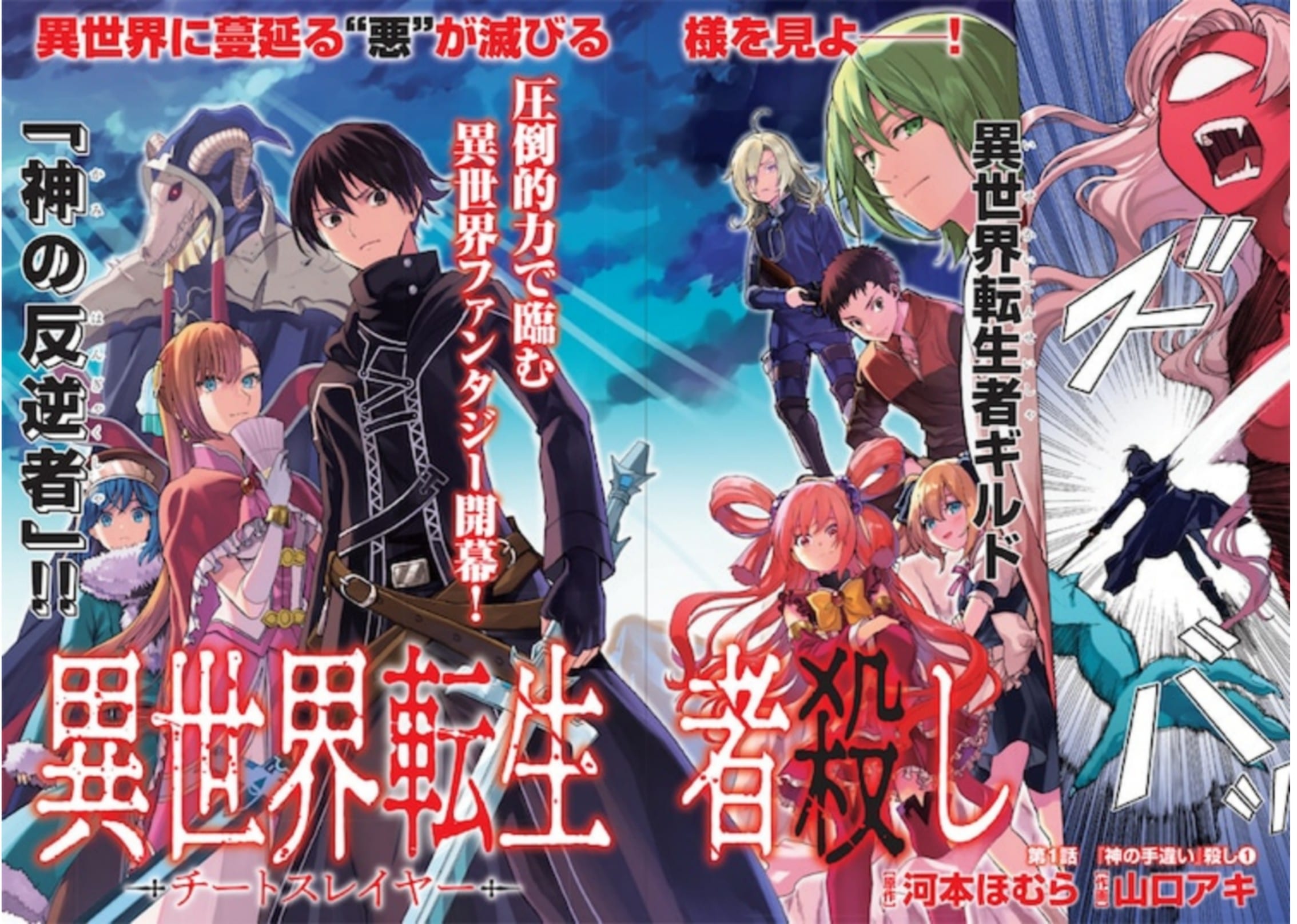 The Killer Of the Reincarnated: Cheat Slayer.

Isekai manga and anime series has been famous for a long time. At this point, most isekai stories end up having a similar plotline. A worthless somebody gets reincarnated into a world where they become heroes who defeat the ‘demon lord’. But what if there was something totally out of the box? An isekai anime that totally blows you off? Well, that is exactly how I would describe the newest manga titled ‘The Killer of the Reincarnated: Cheat Slayer’, by Homura Kawamoto. Within the content released so far, the story feels very catchy, at least to me. The manga crushes the sweet fantasy of every famous isekai story and turns it into the ashes of reality. Brutality, rape, and complete cruelty are boldly featured in the manga to make us familiar with the alternate yet believable consequences of keeping the wrong people in power.

The Killer Of the Reincarnated: Cheat Slayer manga is the opposite of whatever fantasy we have been reading so far. This newly serialised manga is completely twisted. The story takes a questionable path. Questionable, yet something that is completely probable, but no one seems to have had noticed so far. Reading the first chapter gives a clear view of the surprising limit of creativity that Kawamoto has been put into it. The various references of cliched isekai stories make it all the more fun to read. Within the first chapter, the manga dives right into the plot without wasting any time.

Here is everything you need to know about The Killer Of the Reincarnated: Cheat Slayer manga. Its mere plot is sure to interest both isekai lovers as well as isekai haters.

The Killer Of the Reincarnated: Cheat Slayer Plot

Unlike popular isekai manga, this is a revenge story where the main character goes on a bloodlust to kill every reincarnated hero. 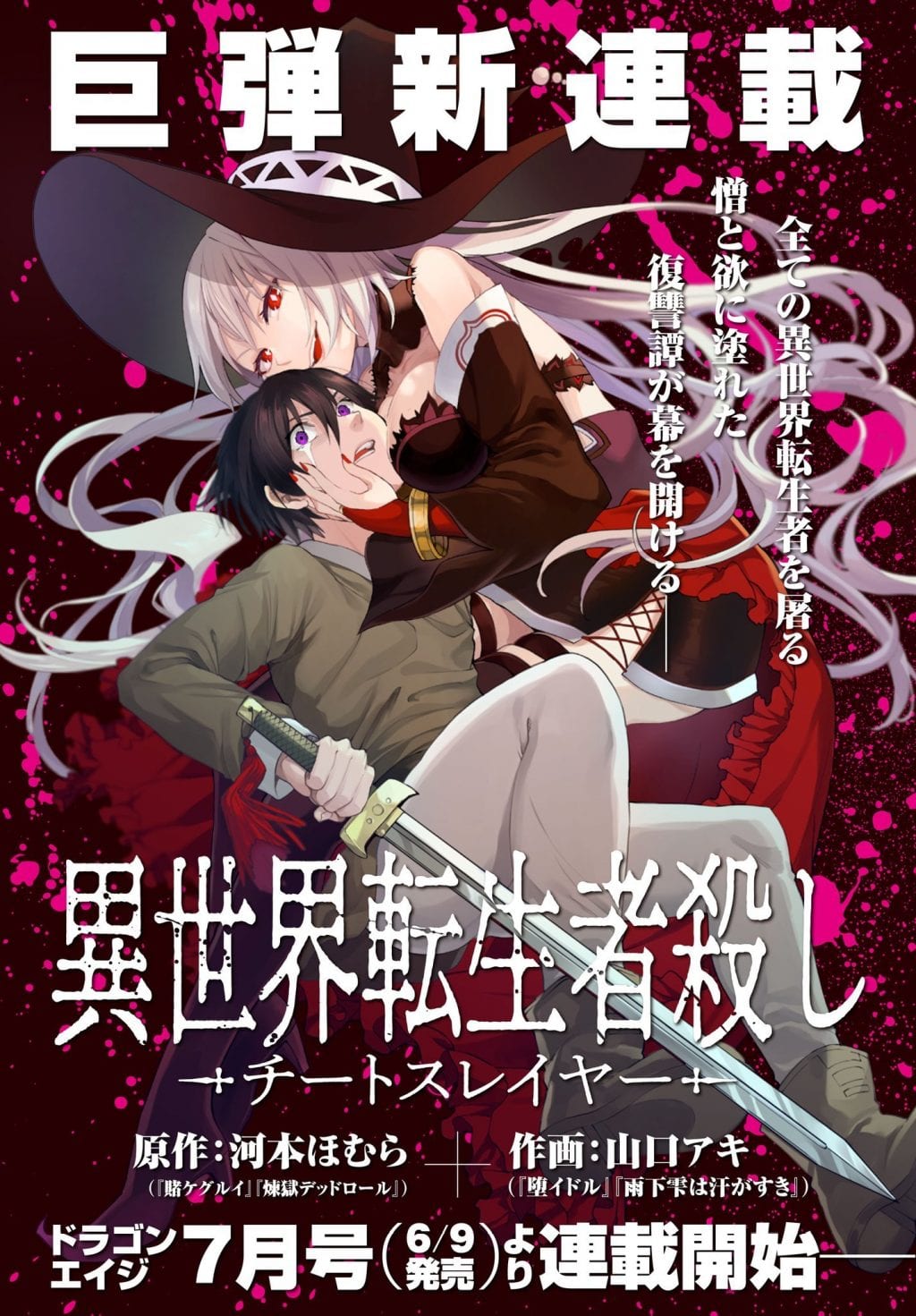 Killer Of the Reincarnated: Cheat Slayer.

Lute, a common villager, admires these reincarnates and aspires to be their comrade. When he is talking to his childhood friend Lydia, a fire spreads in the village. In the next moment, Lute is attacked and left unconscious. In his unconscious state, he watches Louis Crawford, one of the reincarnates, rape the corpse of Lydia. After they are gone, a Witch heals Lute and reveals that the reincarnates are nothing but a bunch of nobodies who got lucky. Thus, they team up to kill the Reincarnates who have been using their power to execute cruelty.

18+ warning: Apart from violence, the manga also contains nudity and many other sexually explicit scenes.

Homura Kawamoto’s The Killer Of the Reincarnated: Cheat Slayer has a peculiar bunch of characters. The first protagonist of the manga is Lute, whose entire village was slaughtered by the reincarnates, and his childhood friend’s corpse was raped. He decides to kill all the reincarnates with help of The Witch. The second protagonist of the manga is The Witch. Not much is known about her except that she has strong healing abilities. She wants to kill the Reincarnates and their reputation, but her reasons are still unknown. I am unsure if the protagonists have any reference to some other manga characters.

There are nine antagonists in the manga, belonging to The Insurgents of God. Each antagonist is inspired by nine different popular isekai manga/anime protagonists. The most powerful and the oldest member is Kilt, The dual-wielding Black Knight. He is inspired by Sword Art Online’s Kirito. Like Kirito’s Elucidator, he also carries a powerful sword, capable of even slaying the Gods.

Honda Yuuya is another member of The Insurgents of God. He is inspired by Re: Zero’s Natsuki Subaru. Honda wears a similar tracksuit. He also goes by the name Looper, a reference that Re: Zero fans would get. Louis Crawford or God’s Mistake, is a lustful antagonist who killed all the villagers in Lute’s village and raped Lydia. He is inspired by Shin Wolford from Kenja no Mago. Flare, the Fallen Goddess, is the next member of the reincarnates. As predictable from the name, she is inspired by the useless Goddess, Aqua from KonoSuba. Next, we have Imelda Pinata, the Daughter of Villainess. She is inspired by Catarina Claes from My Next Life as a Villainess: All Routes Lead to Doom!

Anastasia Melokva, The Young Demon, is yet another antagonist belonging to The Insurgents of God. She is inspired by the sadistic protagonist, Tanya von Degurechaff from Youjo Senki. Roro Sendiger, The named Slime, is inspired by Rimuru Tempest from Tensura. Shijou Yukiko, Otherworld Restaurant, is inspired by Aletta from Isekai Shokudo. Finally, the ninth member of The Insurgents of God is The Undead King, Don Will Dead, inspired by Ainz Ooal Gown from Overlord. Not much is known about these antagonists, but they do share a lot of resemblance to their inspirations.

The Killer Of the Reincarnated: Cheat Slayer Manga

With a very unique concept, The Killer of The Reincarnated: Cheat Slayer manga is published in KADOKAWA’s Dragon Age magazine. It is written by Homura Kawamoto, who also wrote the popular manga series, Kakegurui and illustrated by Aki Yamaguchi. The first chapter was printed on the July issue of Monthly Dragon Age which was released on 9 June 2021. Its name in Japanese is Isekai Tenseisha Koroshi – Cheat Slayer (異世界転生者殺し チートスレイヤー)

In addition, a double appendix is ​​available on the July issue of Monthly Dragon Age. It includes a big poster of “Maken-ki!” drawn by Hiromitsu Takeda. Also, an illustration clear file of “Death March to the Parallel World Fantasy” by Hiro Ainana and Ayamegumu is seen, which is also the cover of this issue.