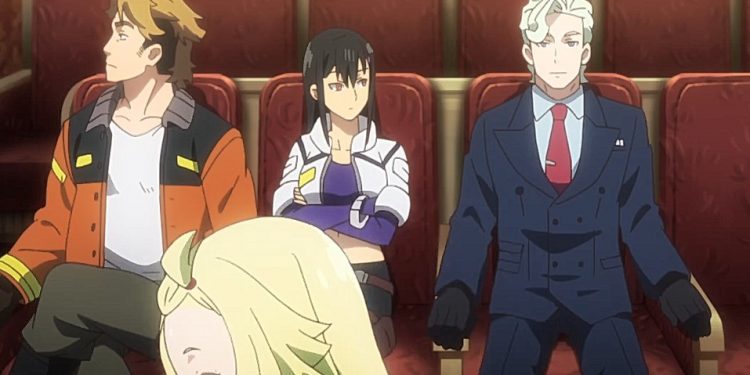 SAKUGAN Episode 12 reveals the final journey of former Legendary Maker and his daughter Mememphu. Gagamber, Mememphu, Zackletu, and Yuri arrive in Dream Colony, a city known for letting everyone have wonderful dreams. The citizens welcomed the most beautiful Diva ever stepped into Dream Colony, and the men wanted her to look at them. She blows kisses and waves at the men who catch those kisses almost fall unconscious. In SAKUGAN’s latest episode, detective Merorroo reveals that Sina, the Diva was the princess of Dream Colony. Yuri is excited that they will see the princess.

Zackletu wonders if Merorroo won’t regret inviting them to such a special event. Mememphu enjoys the luxury of the building and wonders if Merorroo feels better. Merorro reveals about their hated enemy Shibito, who promised to launch an attack in the evening when the princess arrives. Zackletu realizes that the city is on full alert to stop Shibito from killing the princess. Merorroo reveals that he won’t cancel the ceremony and knows Shibito won’t enter the building. He also talked about Sina’s songs and put on a great show tonight for her fan.

Gagamber thinks they praise Sina too much and wonders if she is the most beautiful princess they claim. He decided to head to the restroom since she was bored, and the show took time to start. Mememphu suspects something and follows Gagamber. When he arrives outside the building, Gagamber takes out the ticket that will allow him to see naked ladies and shouts out of excitement. Mememphu arrived and told him to get back, and she knew that he wanted to see naked ladies. Gagamber gets disappointed since the club will close.

Gagamber reminds Mememphu that they are in Dream Colony and can enjoy anything they like. Sina falls from the top and lands on Gagamber’s head. She apologizes, and when they look around, they find that it is the Diva. Gagumber admits that Sina is beautiful than he expected. But the cops are looking for her since they have to keep her safe. Sina wants to live a free life without cops or guards near her. But they are afraid that Shibito might attack her. Mememphu noticed that and decided to help Sina hide.

Gagamber also followed the two, and cops thought that Gagamber and Mememphu had kidnapped Sina. They send report to Merorro, and the robots head out to look for Sina. The news reporters reveal that Shibito has kidnapped Sina since they have no clues which took her, and they know that only Shibito can do that. The citizens get angry since they wait for the day Sina returns. The news reporter receives photos of the guys who Shibito sends to kidnap Sina. They show a picture of Gagamber and Mememphu and reveal that those two are Shibito’s underlings.

The citizens decided to help, and anyone who saw Gagamber and Mememphu had to report to the cops. Gagamber, Mememphu, and Sina pass near the TVs, and Gagamber gets angry that they call them kidnappers. The store manager calls the police and reveals that the kidnapper is in front of his store. But the trio escape and Gagamber asks Sina why she doesn’t clear the air and is not kidnapped. They went to the store and disguised themselves for Sina to enjoy life in Dream Colony. They also travel to the Lalybrinth and Sina to enjoy a simple life.

SAKUGAN Episode 12 will be released on 23 December 2021. The police looked everywhere, but they couldn’t find Sina. Sina teaches Memephu how to paint and begins to stay with Gagamber and Mememphu. But the secret agent arrives and takes Mememphu and Gagamber into their custody. Sina told them to let the two go, and she would do what she came here for. Let’s look at SAKUGAN Episode 12 official details.