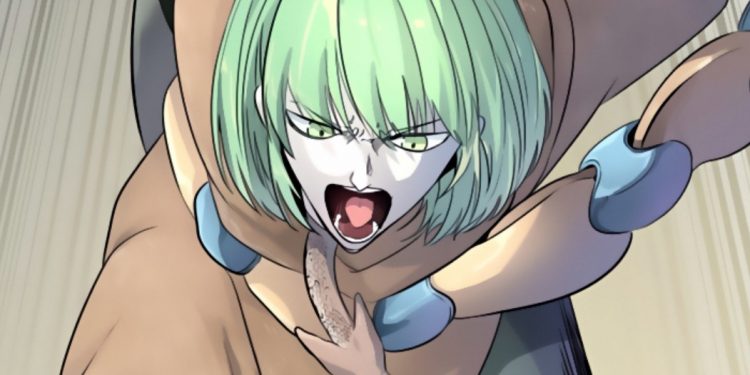 Tower Of-God Chapter 520 reveals the invaders of the Sealing Ship after Orairi warns his soldiers that they have intruders. Tower Of God has been on this after Bam and team decided to rescue Ha Jisung. The Princess told them to get her that thing, and they will leave freely with Ha Jisung. From Tower Of-God’s latest chapter, Orari reveals that the machine stopped, and he wanted to do something that the soldiers remind him not to since he is  Branch Head candidate. But Orari wanted to jump inside while the soldiers tried to pull him back.

At Yu Hansung and Lefavs side, and where Lyborick is, Yu Hansung wonders about Evankhell, who is missing and talks about the warp gate with Lefav believing it is connected to the mothership. Yu Hansung confirms that, and Lyboricks realizes that they have company, ex corps commander Kallavan. Lefav wonders if Lyboricks is Corps Commander. But Lyboricks reveals Lefav fooled the army to survive, and this is their graveyard. Yu HanSung realizes that Lyboricks is the new Commander of the 4th corps.

Lefav agrees while revealing his name and that Lyborick is a pain to deal with, but he might not be guarding the gate. Lyboricks tell them that he knew that everyone could betray the army for survival, but if he came here, it means he has changed his mind. Candidy interferes and tells Lyboricks to relax since it is a family business, and they can handle that. Meier talks with Ms.Lefav reminding her that she is putting her children in danger and has family issues. Lefav wonders if the two are trying to make her feel scared and call them little brats who will never touch her kids.

Meier agrees with that and thinks she could have become a high ranker of her family since they could have gotten rid of disgrace as the future leaders. They attack each other, and Meier notices that she has run out of her bullets after changing her gun. Candidy thinks that it is their change, and they must not be scared of her since Lefav is weak without bullets and orders everyone to eliminate her.

Yu Hansung finds that the power of his barrier has decreased due to the last battles, and Lefav fooled them while exchanging blows with them. Yu Hansung gets angry at Lefav and Candidy, not the electric spear, and realizes that it is coming from Corps Commander Lyboricks. Lyboricks apologies that he has to get involved since he cannot stay quiet but shoot noisy flies down. The Announcer reveals that there are only two turns left for the game to end.

Meanwhile, High Ranker Lo Po Bia Branch Head Whitegarment Widow and Sicarius encounter Evankhell. Love is also at that side. Whitegarment noticed the flames around Evankell and knew that was her opponent. But she was not expecting to meet Evankell soon.  Evankhell tells her to stop joking and burn until she gets roasted.

Whitegarment thinks that is the line of a cook trying her best, but no one can roast with a small amount of heat. She reveals ”Zubizarreta,” a special shield that she received from the head of the family. Evankhell thinks she should not have received something from a guy who never shows up and can’t consider that treasure instead of junk. Whitegarment get angry that Evankell is disrespecting a special shield from the head of the family, and Evankell has not brought up well.

Also Read: Eve’s Powers Is Out Of Control in Visual Prison Episode 9.