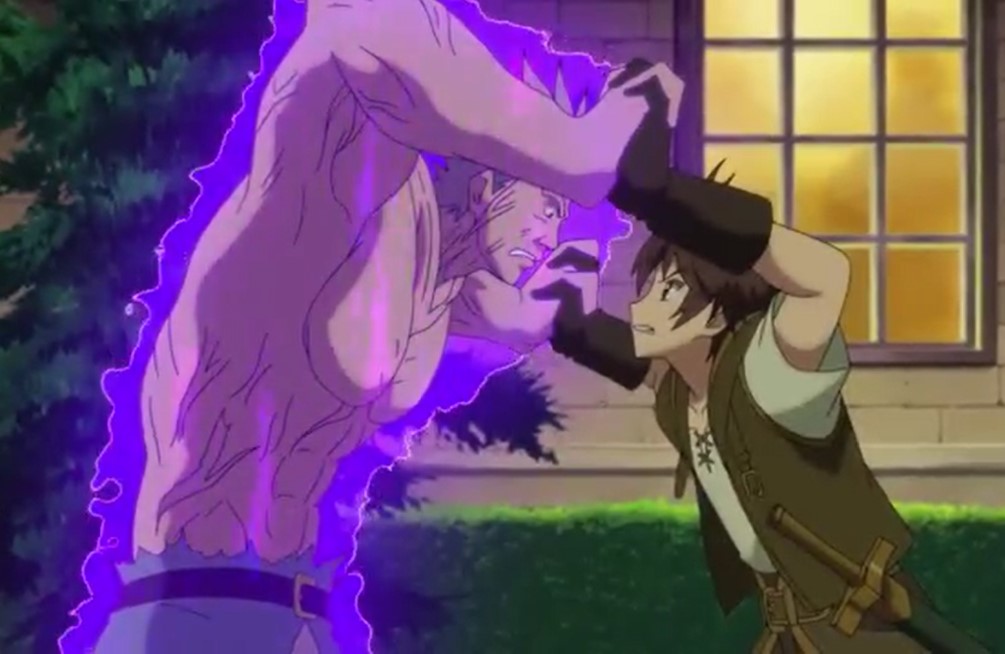 Miss Elna announces that she has two announcements to make today. The first one is about the newly transferred student. She calls her in, and the girl reveals that she is Leila Overclock. Leila looks at Noir and smiles; Noir realizes that he has seen her somewhere. Noir remembers that he has seen Leila at Emma’s birthday. That day Leila helped him to save Emma. Elna told Leila to sit next to Noir since they seem to know each other.

The boys are jealous that Noir is sitting with two hotties. They told him that he could give them one since he has Emma. Elna told the boys that the second announcement is that they are going to the hot springs. The boys are glad that they will be able to get some hotties there. The next day they head to the vacation with Elna, who is leading them. Emma relies on Noir to stop the boys from peeking at them when they are in hot springs.

The Hidden Dungeon Only I Can Enter Episode 11 Release Date

The Hidden Dungeon Only I Can Enter Episode 11 will release on Saturday, 20 March 2021, at 2:25 AM on Crunchyroll or ANIPLUS. Let’s take a look at the recap, preview, and other updates below.

Previously on The Hidden Dungeon, Only I Can Enter Episode 10

The boys are happy that Noir won’t’ be able to keep his promise. They want to see the big chest of the girls just like Noir. Hjorth tried to fool the girls and Noir that no one will be peeking at them when they bathe. Noir is glad nut Emma comments that Noir came to see her naked. She started to shake her melons, and the boy’s mouth started watering. They wondered how the girls’ melons look likes when they are naked.

The boys are glad that they will be able to see the melons of the girls for the first time in their life. Elna told the boys that they must be careful since where they are going, there is some monster. They must look out for traps or anything dangerous. The boys are ready to do anything so that they can see the melons of the girls. On their way, Hjorth told everyone that he has skills in detecting traps. The girls couldn’t believe him. 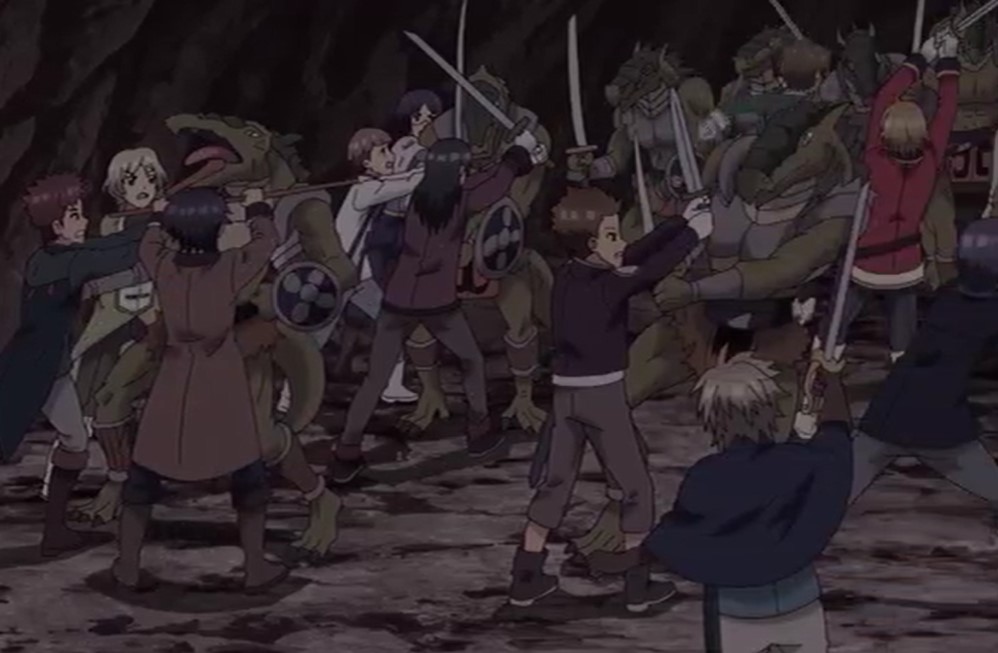 They know that the only strong guy at Hero Academy is Noir. Hjorth proves them wrong and asks Noir to step back. He throws a stone where Noir was about to step, and a trap appears. Noir thanks Hjorth for saving him using his detective skills. Suddenly a Pixie appears and told them about the shortcut. Everyone falls for that since she was cute and beautiful. Noir uses the powers of his eyes and notice that she is luring everyone to the trap.

The boys headed there and said that they are not turning back. Noir reveals the truth about Pixie and how she is using them. Pixie realizes that there is no need to hide the truth, and she calls out for the Lizardmen. Lizardmen were more powerful and carrier. Noir thinks that they must come up with a plan to defeated them. He knows that the boys from his school are coward. He thinks that he is the one who is going to protect them.

The boys rush toward the Lizardmen to impressed the girls. They started to punish the Lizardmen using Demon slayer fist. Noir is impressed and wonders what has happened to those coward boys. The girls also join the battle and slay the army of Lizardmen. Noir was stunned and just watched as the drama unfolds. The boys showed their true strength thinking that they will get a reward for peeking at the naked girls.

After defeating the Lizardmen, they head to the Inn nearby. The owner showed them how they are going to work things about. The boys can’t wait for their rewards. Emma asks the boys if they still want to see the girls naked. They both shout yes. Noir seems to be gloomy since he doesn’t support that idea. The boys notice that Noir might ruin their plans. They decide to capture him, but Noir runs away. 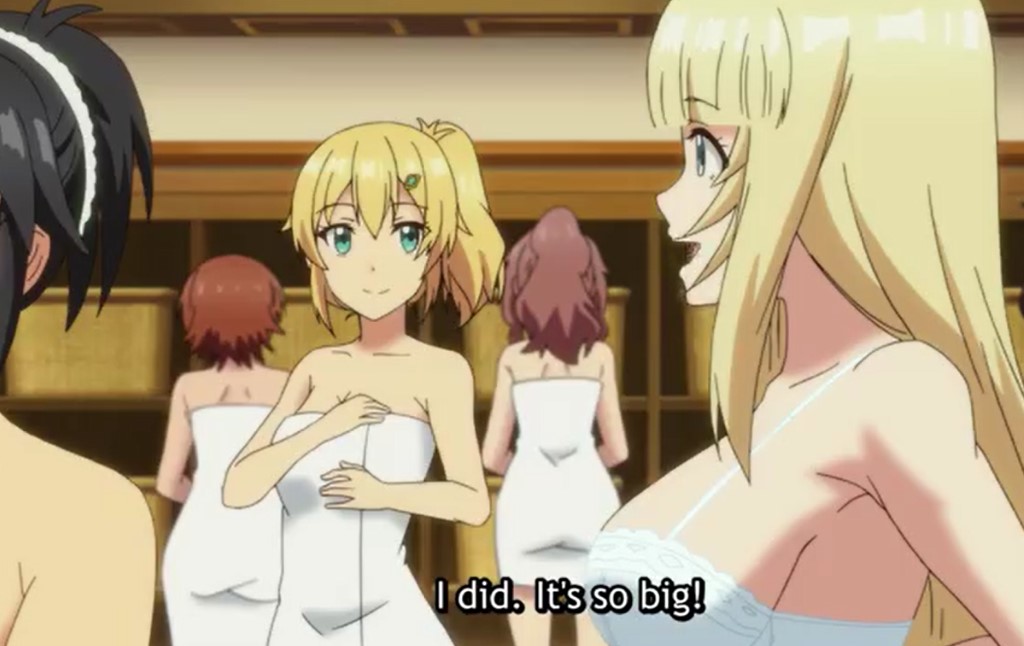 The boys chase Noir and head outside, but they made a foolish move. The girls are glad that the boys are outside, and they can now get a chance to bathe and relax. Noir told the boys that he could not disrespect their girls by peeking at them outside the Inn. He told them he knows that he is a boy and his dream is to see a naked lady, but he cannot do that. The boys realize that they have made a foolish move and decide to head back.

Noir stops them from saving the honor of the girls. Hjorth challenges Noir to a battle, and if he wins, he will peek at the girls. Noir clashes with Hjorth, who started to transform. Elna shows up and realizes that Hjorth has taken something to make him a muscular guy. Elna told Noir to step back; she will handle Hjorth. Hjorth defeated Elna with a single move, but Noir catches her before she smashes with the ground.

Elna told Noir to remove his hands from her chest. Noir apologized and decided to battle Hjorth. He defeated Hjorth after hearing that Hjorth is after Emma’s melons. Noir chases the boy who escaped to see the girls. He manages to stop the boy, but he fell inside the hot springs. He has lost his Lp, and he cannot move. Elna and the girls decide to reward Noir for saving their honor. The squeeze Noir face with their melons and his Lp rises to 10000 Noir enjoys it.

The Hidden Dungeon Only I Can Enter Episode 11 Preview

Read The Hidden Dungeon Only I Can Enter Episode 1o.