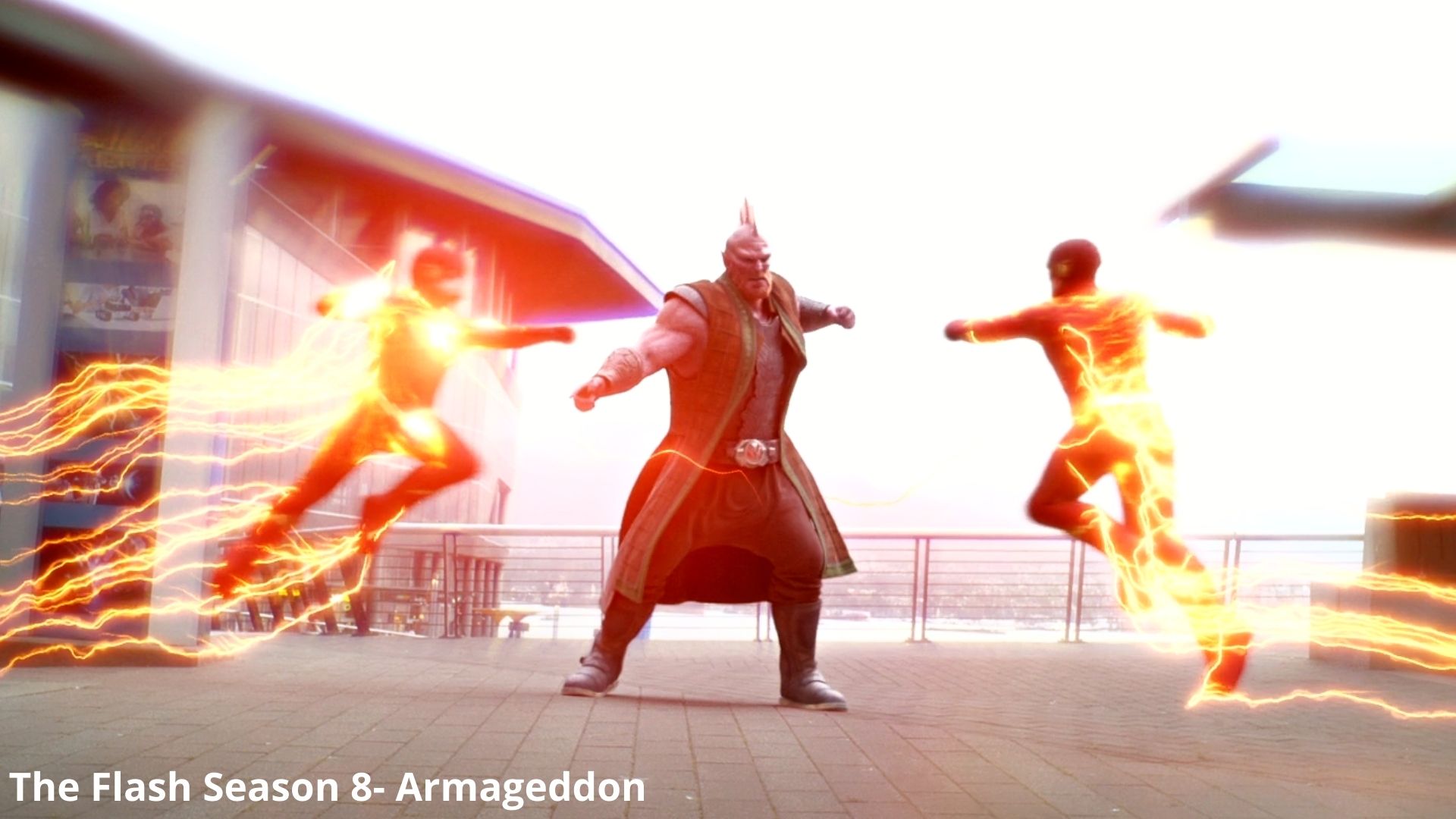 Armageddon event has finally arrived on The Flash Season 8, and the fans cannot wait to watch The Flash Season 8 Episode 2. The first episode gave the fans a look at an OG character from the “Legends of Tomorrow”. Furthermore, we got to see that character fight alongside Flash and take down the big bad. But did they really defeat the big bad of the episode? Or was it just a beginning on the first episode of the Armageddon event?

The American television series has been hugely popular since it first arrived on 7th October 2014. It has been seven years now, and the show is still going strong. The show focuses on the characters from the DC comics to portray them in live-action. However, the center of focus is one of the most popular characters in all of DC comics, Flash. The fastest man alive has been running through the seasons, carrying the show on his shoulders to make it a success. This series is also the second installment in the “Arrowverse” that started with the popular show “Arrow” in 2011.

Furthermore, there have been several crossover events in every season that has featured multiple characters from different shows in the “Arrowverse”. However, this time, the crossover will be a five-part event, and all of those five episodes will air as the first five episodes of The Flash. In simple terms, the eighth season of the show has started with a crossover event and will be featuring characters from other “Arrowverse” shows on each episode. The viewers have got their look at the first crossover episode, and now they are awaiting the release of The Flash Season 8 Episode 2. However, let us first take a recap of the first episode of the season. 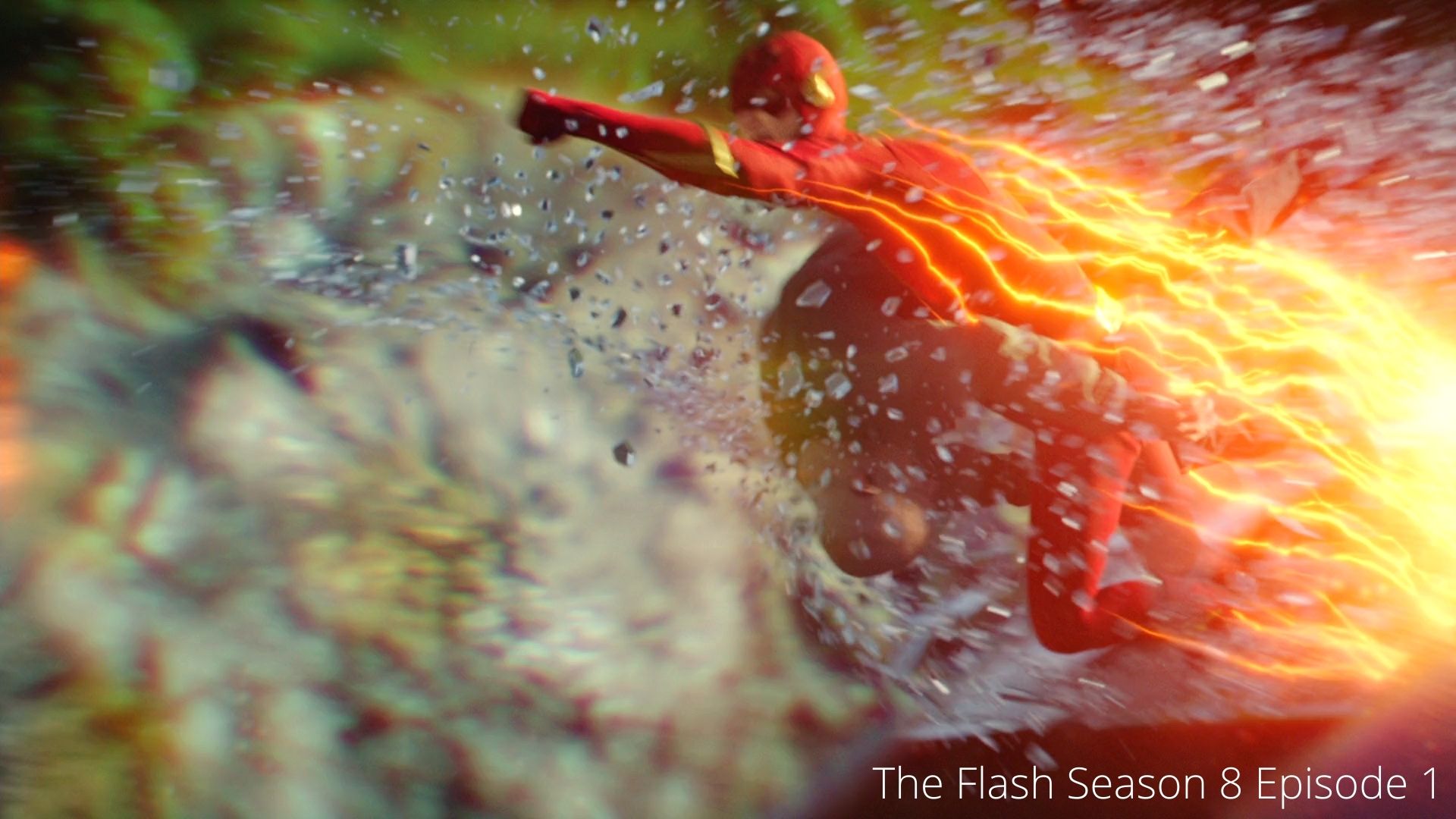 Still from The Flash

Episode 1 of The Flash Season 8 came out on 16th November 2021. Furthermore, the episode was titled “Armageddon, Part 1”. The episode opened up in the year 2031 where there was devastation and people running everywhere in fear. Then we got our first look at another powerful meta known as ‘Despero’. It seemed like he had caused all of that destruction, and then he disappeared using some kind of tech on his belt. Then we moved back to the present time, where a lot has changed since the time we left off in Season 7.

We see Barry and Caitlin having Coffee at Jitters when they get an alert about two trains about to collide into each other 50 miles away. Barry runs there and gets out all the people on board both the trains and then runs back to Jitters to have that coffee with Caitlin. He does all of that in just 12 seconds showing that he is on a whole new level. Meanwhile, Iris is running her own podcast named Citizentopia, which is a part of Iris’ own media company called CCC Media. She is quite successful now and has a lot of people working in her company. 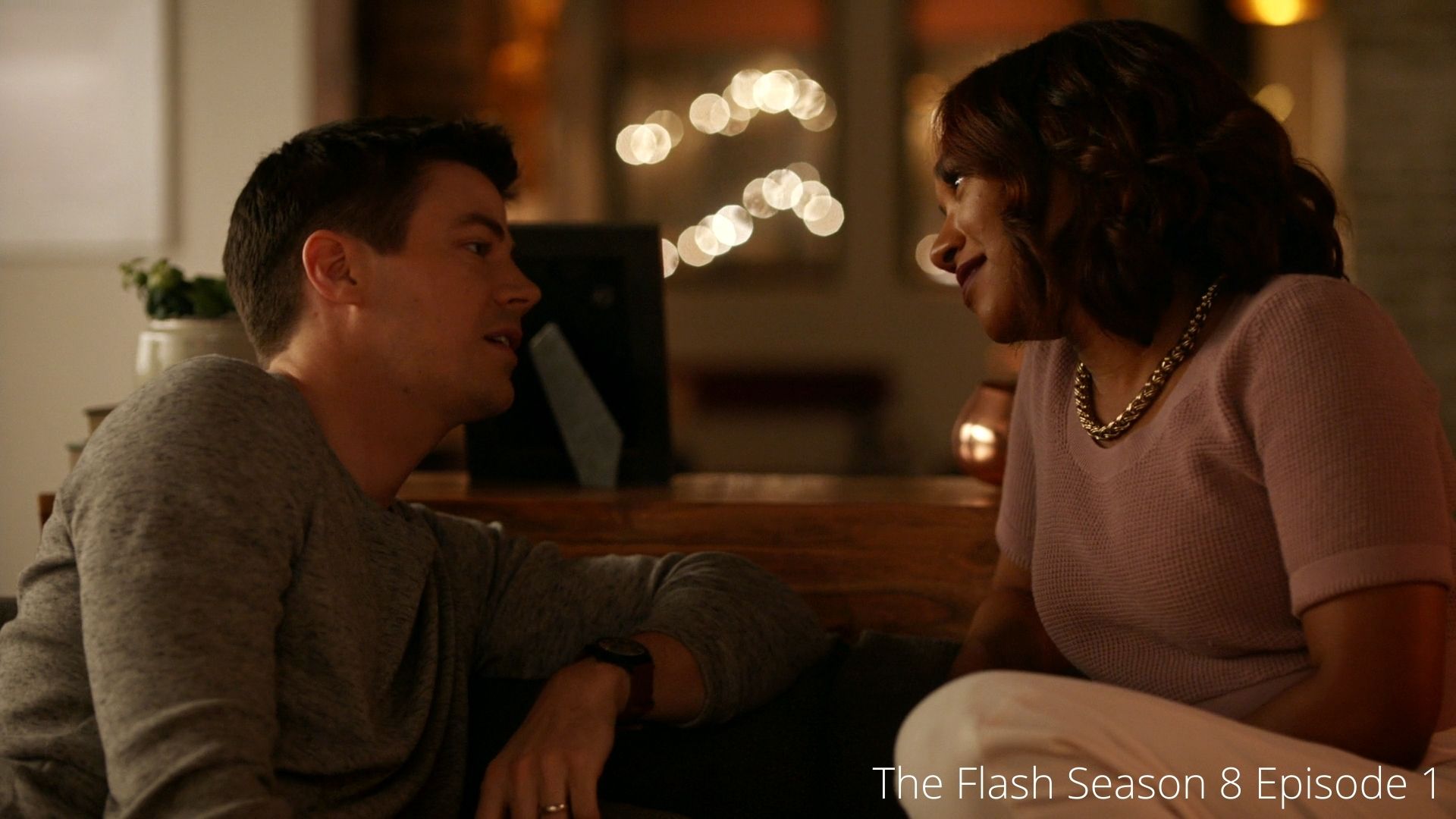 She interviews Captain Kramer about her decision to disband the meta task force. After the interview, Iris promotes Allegra to the post of supervising editor because, according to her, she deserves it. The next thing we see is Barry and Iris spending some quality time at home. However, they get interrupted when they get a sudden visit from an old friend, Ray Palmer. He is in the city to attend Central City Tech Con or CCTC. Barry and Iris welcome him and let him stay as he cannot get any hotel in the city.

Also Read: What To Expect From The Flash Season 8?

The next thing we saw was a group of OG metahuman gang who called themselves the ‘Royal Flush Gang’. They attacked the security guards at Mercury Labs and stole a powerful microchip that the guards were protecting. Barry examined the robbery place the next day and told Kramer about the gang, which was active way back. The gang had first attacked when he was in a coma after getting hit by lightning. Meanwhile, at CCC Media, we saw Allegra give instructions to the other writers about covering the robbery at Mercury Labs, but they didn’t listen to her.

Whereas, Barry was working at CCPD on the Mercury heist case to figure out what happened. But he believed that the train collision was linked to the Mercury heist, and he was right about it. Although, he soon saw a task force going to Iron Heights, and he learned that there had been an outage and the inmates were out. So he ran there and got everyone back into their cells. However, he later told Team Flash that one inmate was missing. Chester then told them that the chip was a cryptocurrency chip and the device stolen from the train was a huge power source. 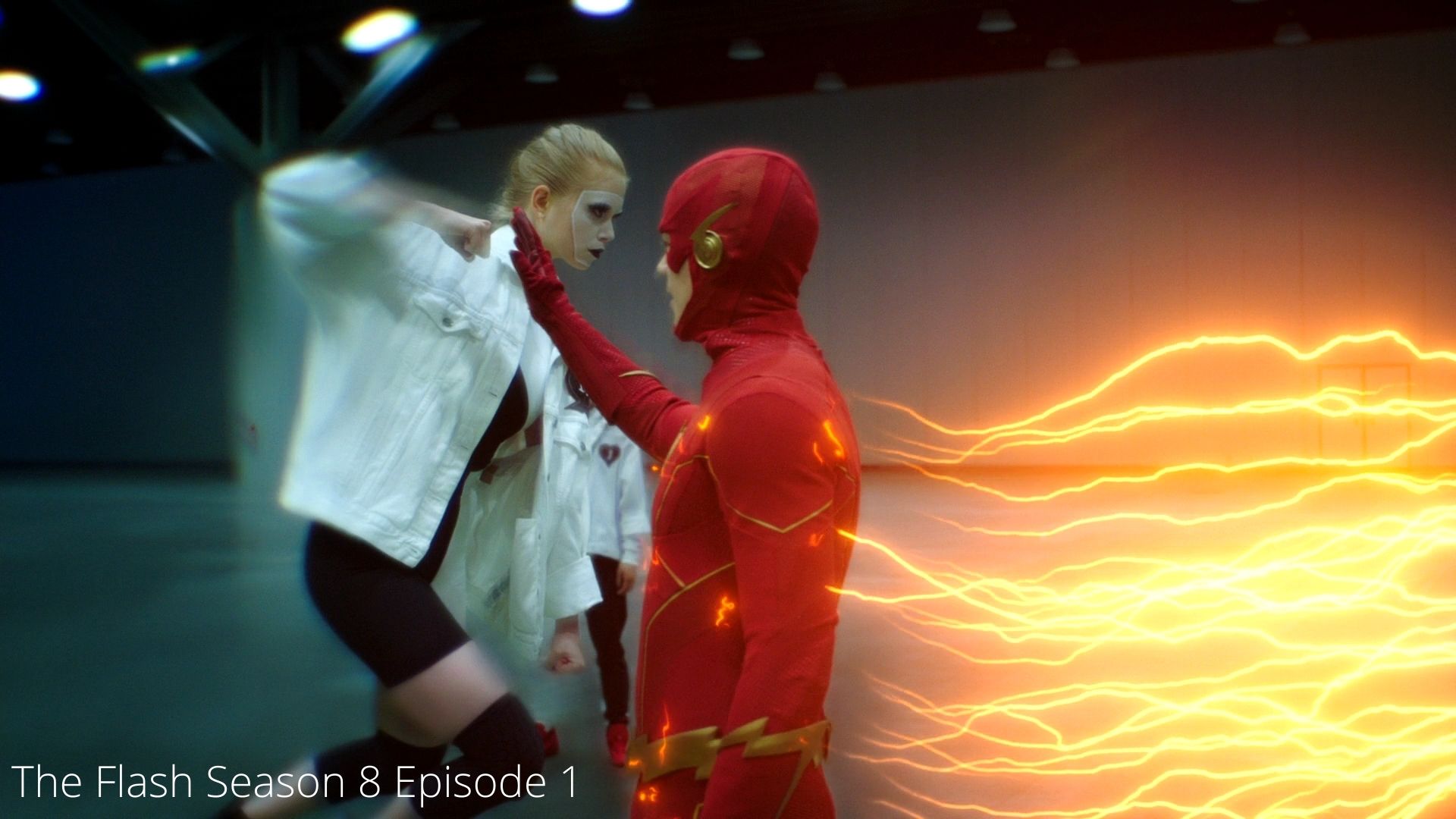 Furthermore, the inmate that was captured was a hacker. All of this added up to the meta-human gang’s plan of robbing the casino using the chip, the device, and with the hacker’s help. However, Chester pinged their location when they hacked the casino and got there. Although, one of the metas in the gang named Queen seemed to think she knew every move of the Flash before he made it. But Flash was too fast for all four of them and beat them without even taking a breath. He told Queen that she could not figure out his move because his mind thinks at super speed.

The Flash & Atom vs Despero

Moving on to CCTC, we saw Chester avoiding Ray after he set up a young scientist meet for Ray, not knowing that Ray has moved on from it all. Whereas, Iris did another successful interview with Ray at CCTC. However, the good times came to an end when Despero appeared out of nowhere and called out for the Flash. Barry arrived all suited up and was ready to end the fight, but Despero turned into his original form, which is a giant red alien. Flash started to run around him, but Despero threw him outside the building.

He seemed too strong for Flash, but Ray decided to help his friend. He suited up as Atom after a long time and joined the fight alongside Flash. However, Despero was projecting illusions, and they could not figure out where he was. Barry decided to distract Despero by creating a speed mirage, but Despero saw through that as well and beat him. Just as Desparo was about to kill him, Flash asked to show him why he is a villain in the future. Despero showed him the vision from the year 2031, where it was Flash who was destroying the world by creating Armageddon. 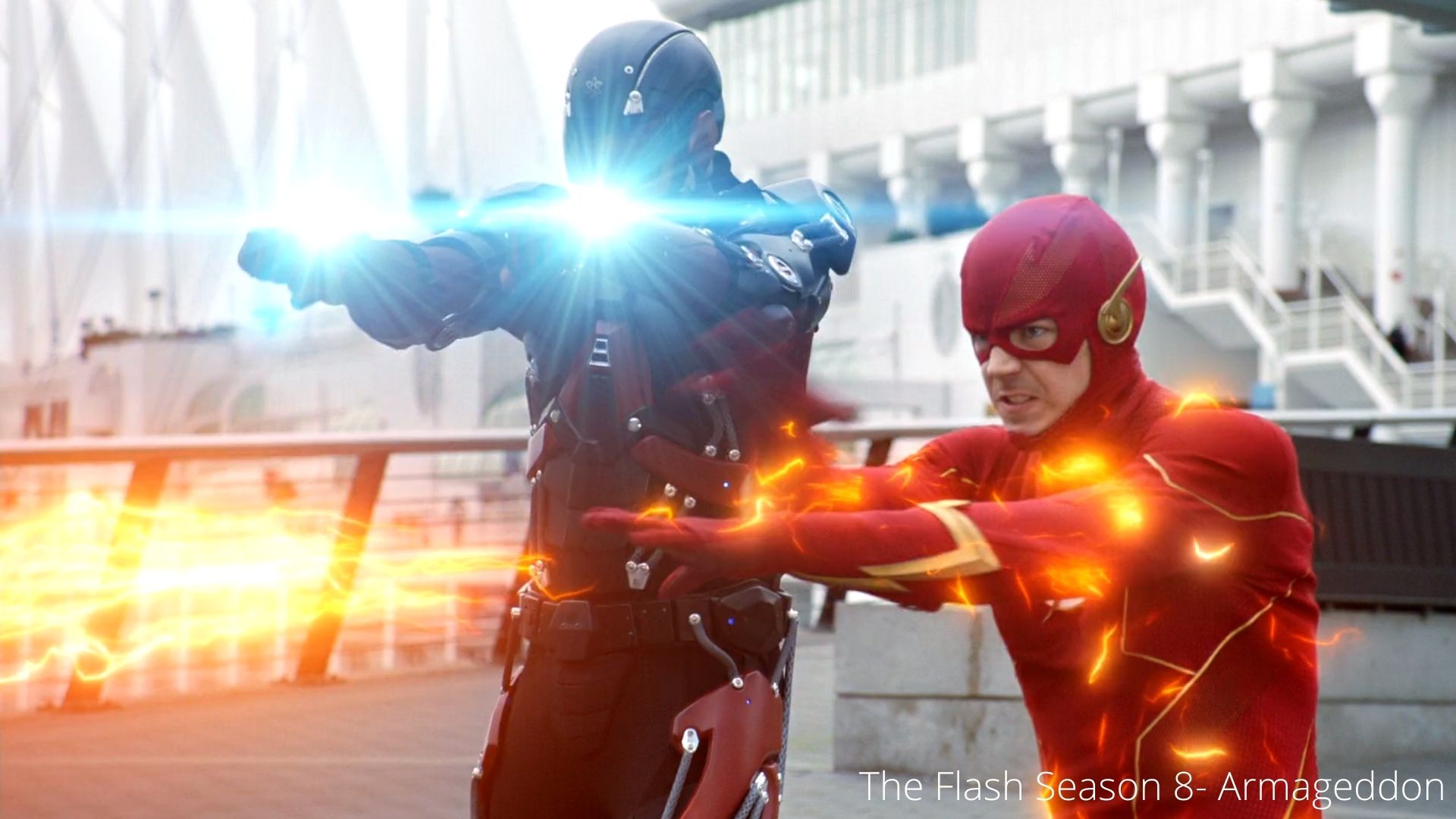 Although, Ray figured out the weakness in Despero’s tech belt and sent him back to somewhere random. Later at the lab, Caitlin and Cecile confirmed that Despero’s visions from the future were true. But they were all confused about why Barry would turn evil upon the city and the world he had protected. So Ray advised Barry that he show Despero who he really is as a human being. In the end, we see Barry reveal his identity and thoughts to Despero. Seeing all that, Despero gave Barry seven days to prove why he won’t turn evil in the future, or he will kill him after that.

“The Flash Season 8 Episode 2 will release on 23rd November 2021 at 8 pm ET on The CW.” Furthermore, the episode will be titled “Armageddon, Part 2”. The first episode of the season kicked off the 5 part Armageddon event and the fans are waiting for the next episode. The next episode will show Flash trying to prove his innocence to Despero. He will be confused and frustrated about why he is going to turn his back on the people. Meanwhile, Desparo will tell Flash that several tragedies will crack his mind. In all of this, Flash will go to meet Black Lightning and get his advice on the matter. So stay tuned for another exciting episode when the crossover event continues with Part 2.

The superhero television series has made a huge fanbase around the world, and the fans are excited about the new season. That is why they are wondering about where to watch The Flash Season 8? Well, we have a simple answer to that popular question. “The Flash Season 8 airs every Tuesday at 8 pm ET on The CW television network in the United States.” Furthermore, the show is available to watch on the official website of The CW. Other than that, the show is available to stream on Amazon Prime Video in several regions as well. So go ahead and start watching this amazing show if you haven’t already.