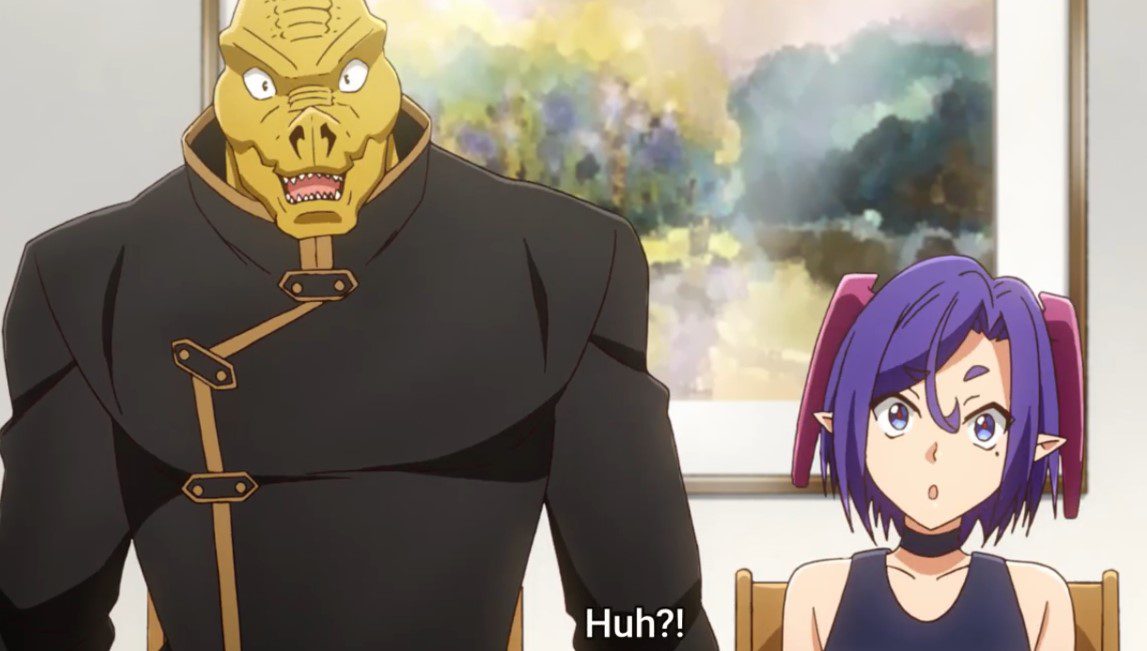 Kinji has now discovered that Rim is the sister of the Demon Lord, and the two were the guardians of the Dungeon. The episode begins with Kinji’s crew talking about how they have to stop Bazel. Kinji comments that they have to beat this Dungeon and gain the power of the ruins before Belza does. The crew was surprised when he said using the ruins’ powers will help him settle his debts. Ranga realizes that loans are Kinji’s problem and why they have to help him in that matter.

Shia comments that making the team help him repay his loan is pure evil. The girls scold him that he is making women and kids pay his loan. Shia showed him a copy of the statistical evaluation sheets she borrowed from the HQ. Kinji realizes that he is at level 5 and the average adventurer archives level 20. Shia decided to train Kinji to level up. She reminds him if he enters the Dungeon at level 5, he could die any moment. Kinji, Wanibe, and Shia went to Intensive Training. Kinji thinks it will be easy since a girl will be overseeing their training. The episode title is ”Weapon of Mass Hysteria.”

Previously on The Dungeon of Black Company Episode 8

Shia trains the two their stamina by making them run a long distance. Shia told Kinji that he is too slow and can’t outrun the monsters at his speed. They went to another second torturing taring. Kinji lies on top of two logs, and below him, there is fire; Shia sits on his chest, and if he losses balance, he is getting burned. They finish with the first two training. But Shia told them about a training system for acquiring magical power. Kinji realizes that he is a human and using magic will be tough for him.

He told Shia that he doesn’t have magic. Shia replies that she created a device that rapidly activates a person’s sixth sense. Kinji reminds her that the logs will come flying at them from all sides, and they can’t dodge all of them. Shia gets angry since he called her a stupid idiot twice, and she told him that he has to go through this. Wanibe and Kinji took a break, and Ranga brings some juice to cool down. Shia comments that if she knew Kinji’s abilities, she would have trained him that specific talent.

Shia recalls that Kinji sends them to a battle, and he orders them like a captain. She realizes that Kinji is good at manipulating others, and they fight for him all the time; Shia wonders if Kinji’s ability is manipulation. Ranga teases Kinji and tells him that he has all the qualities of a useless man. They went on another torturous adventure and trained the whole day. In the evening, Kinji misses his NEET life in Japan. The next day Kinji finds a magical gun that strips people naked, and he did that without knowing.

Where To Watch The Dungeon of Black Company Episode 9

Where is The Chosen Filmed? A Look Into Jesus’s Life!