That Time I Got Reincarnated as a Slime Season 2 Part 2 continues from where it left last season. This time we will witness a new version of Great Rimuru. Let’s take a look at the anime updates starting from the previous episode of the last season. From the previous episode of the anime, Rimuru finishes sacrificing ten thousand soldiers to reincarnated Demon Lord.  He felt heart when he returns to the Jura Tempest and finds that his nations got killed. Fortunately, he finds that if he becomes a Demon Lord, he can revive everyone. During his battle with the Falmuth Kingdom, he uses mini slimes to take out their souls.

Falmuth warriors are responsible for killing Rimuru’s nation and his favorites. Rimuru decided to make them pay for the death of his nation with their souls. Rimuru uses slimes that transport beams of light to the warriors during punishing the enemies and took out their souls. He felt pity for the warriors when they died and said the mighty wrath of the Gods pierce them. The Falmuth soldiers begin to die in number. Rimuru unleashes the Megiddo that chops out the heads of the soldiers.

Edomalis Falmuth has seen that his nemesis is here, and his life is also on the line. Unfortunately, Rimuru took all the souls of his enemies except for Raizen, Reyheim, Edomalis, and Folgen. Raizen encounters king Edomalis, who suggest escaping before Rimuru lays his hands on them. Raizen reveals that they can’t teleport since the enemy has covered the whole Kingdon with an unbreakable barrier. Folgen thought he was powerful enough to face Rimuru; a laser pierces his heart as he gets out of the tent.

Previously on That Time, I Got Reincarnated as a Slime Season 2 Part 2 Episode 12

Raizen tried to protect the king. Rimuru flies towards the king, but the king got saved when Great Save orders Rimuru to spare the king and kill everyone. King Edomalis tried to fool Rimuru by he paid by losing his arm, and Great Sage comments that he earned merciless acquisition. The highly influential voice of Westen Holy Church, Rayheim, asks Rimuru to spare his life. But Rimuru realizes that he might lose a lot of energy and summons three Archdemons. He orders them to take care of  Raizen.

The Archedemon’s leader accepted Rimuru’s order since he wants to get recognized as an essential member of Rimuru’s army. Great Sage reminds Rimuru that they have harvested all the souls of the enemies. Rimuru transformed into his slime form and ordered Ranga to send him back to the Tempest. Later the two arrive at the Tempest, and the monsters’ nation gets excited that Rimuru has returned. The Harvesting Festival begins as Ranga puts Rimuru on the ground. 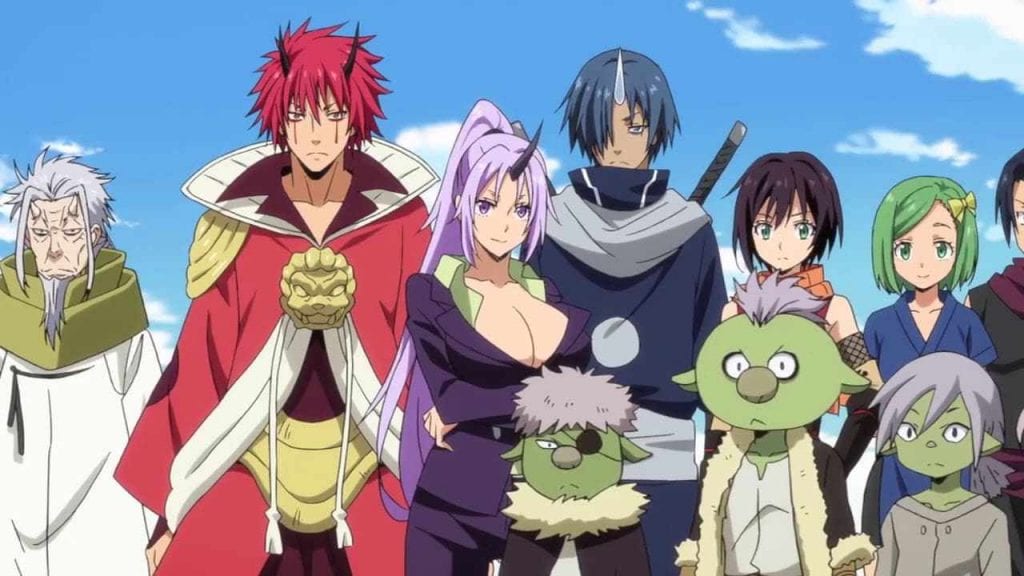 During the process of the festival, Benimaru fears that Rimuru might change after becoming a Demon Lord. Great Sage calculates all the items of the reincarnation process, and the process gets completed. Meanwhile, at the battleground, the Archdemons has managed to locate Raizen, who got reborn. Raizen challenges the Archdemons, thinking that with his new body, he can take high-ranked demons. The leader of the Archdemons told him that they are taking him down.

Raizen refuses and throws all the best weapons he can to strike the Archdemons, but he had no match. The demons warn Raizen that he will die since he is not submitting. Raizen uses nuclear strike magic: nuclear cannon to strike the monsters, but they smashed him with a single blow. The Archdemon’s leader looks at his eyes, and Raizen falls unconscious. Back at the Tempest, the Harvesting Festival is over after a massive flash of light. The Jura Tempest nation falls out as the new Demon King emerges.

They wake up as soon as Demon Lord Rimuru steps on the ground, and Benimaru is glad that Rimuru is still the same person. Demon Lord Rimuru activates incarnation standing near Shion Tempest members and used those souls he collected to revive the dead. Unfortunately, they got shot of one soul, but the te Archdemons arrive, and two of them offer their souls and complete the process. The monsters’ nations wake up, and Rimuru reunites with Shion, Gobta, and other family members. Life in Tempest returns to normal.

Also, read To Your Eternity Episode 13 Delayed Due To Weekly Break.