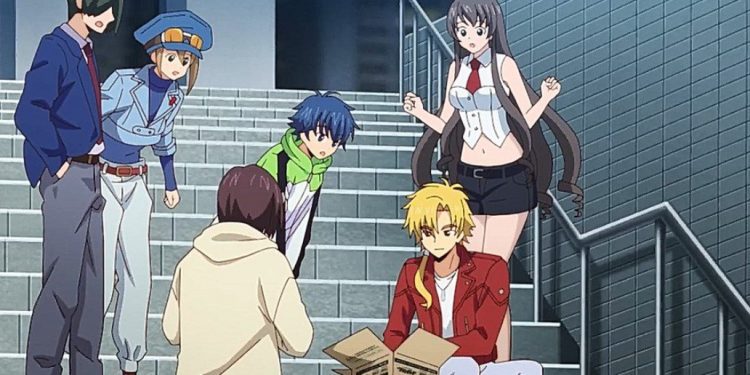 Card Fight Vanguard Season 2 Episode 11 reveals Yuyu vs. Shinobu after Blackout advanced to the next level. Mirei wonders if she will ever be happy after hearing what Haruka said to Megumi. Haruka has lost Card Fight, and Team Black Out is leading. Masanori tells her not to worry and switch off her cellphone. The announcer reveals that Megumi defeated the first gatekeeper. Mirei narrated the story of two lions. In the latest episode of Card Fight Vanguard Season 2, Shinobu and Yuyu don’t hesitate and begin the battle the moment they meet.

Mirei continues to narrate the story of two lions that lived in different environments. The other lived in a wealthy kingdom, and the second lived in a developing country. The one from the wealthy kingdom was named Arthur, and the other one was Leon. Back to Shinobu vs. Yuyu, Yuyu attacks Shinobu takes Greedon from his side deck. Shinobu tries to annoy Yuyu by teasing him and pranking him during the battle. But Yuyu decided to take the battle seriously and ignored Shinobu. He calls out Trickstar, and Shinobu reveals that he will burn Blackout’s banner when he wins.

Yuyu vows not to lose and remembers the day he battles with Mirei. He decided to use those moves that defeated him against Shinobu. Shinobu managed to counter Yuyu’s strikes and summons Avaricious Demonic Dragon Greedon. Megumi thinks that Shinobu is tough to handle, and Tohya reveals that Shinobu uses a rear-guard to make a single attack. He reveals Shinobu’s fighting style. Shinobu attacks using Greedon Tripple Drive: Doble Critical. Yuyu gets sent flying after the attack, and Shinobu reminds him that he is strong and cute. Yuyu has taken five damaged and wonders what to do.

Yuyu realizes that if he talks more damages, it will be over, losing. Mirei reveals how Arthur and Leon ruled the kingdoms, but they fought for the territory one day. That made them ally after the battle and live in peace. Masanori comments that it was a good ending. He realizes that the lions grew up as a friend, but they end up fighting, and one of them get wound up dead. Mirei reveals that those lions must go through that because they were both kings protecting their kingdoms.

She believes that if one cannot fight and win, they can’t protect their country. Mirei adds that no one will stay around the loser king, which is why Masanori has to win his next battle. Yuyu rides Chakrabarti Divine Dragon Nirvana at the battle and thinks that he can pull out a victory. Shinobu tries to scare Yuyu into making mistakes. Yuyu draws Critical Trigger, but Shinobu was one step ahead of him. Shinobu tells Yuyu that he won, and Yuyu refuses to give up. He uses Greedon to land the final blow, but Yuyu fights back and remains with two cards each.

Yuyu realizes that those two cards will determine the winner of the battle. Shinobu reveals that Greedon has 78000 power and ends his turn. Yuyu wonders how he can take down Shinobu and wonders if it is the end. But he thought of a Card that would save him. He begins to dominate the battle and uses Varina Valient overDress. Shinobu tried his best and wondered how Yuyu was reading his moves. Yuyu landed the killer blow, and the announcer reveals that he has won. Team Daybreak has suffered another loss.

Card Fight Vanguard Season 2 Episode 11 will be released on 14 December 2021. Masanori and Mirei continue to talk about those two lions who tried their best to become good friends. Both lions didn’t want to fight since they were best friends, but their countries were at stake. Due to their pride, they couldn’t do that. Let’s look at Card Fight Vanguard Season 2 Episode 11 official details.

Also Read: The Mystery Behind the Former Demon Queen Isabella In Chapter 324 of My Wife Is A-Demon Queen.

Block B’s P.O As Control Z Appearing in Yumi’s Cells 2 To Make You Make In Love With Him