Fans can't wait for him to confess! 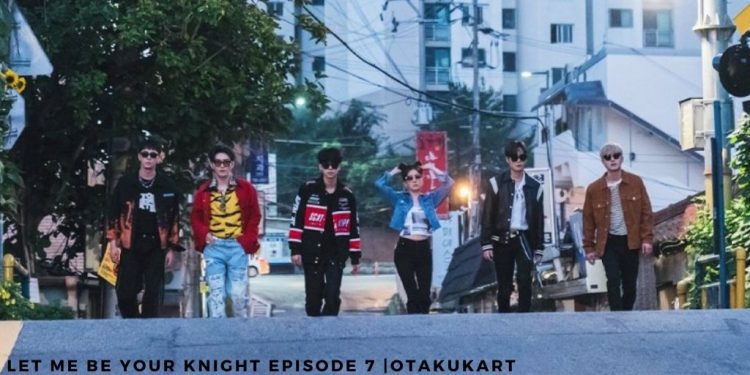 Let Me Be Your Knight Episode 7 is just a few days away! Yoon Joo seems to have grown closer to the members of LUNA, especially to Tae In. The audience couldn’t stop smiling whenever Tae In and Yoo Joo came on the screen together. Over the last few episodes, Yoon Ju and Tae In have surprisingly bonded very well. Besides the romance between the main leads, a lot has also been happening in the kdrama. The audience was surprised by how nicely the members of LUNA dealt with Ga On’s fake bullying rumors. As expected, No Sang Hoon the guy who accused Ga On of bullying him was actually the one who used to bully. Taking just a part of the video which was filmed while Ga On was being bullied to benefit himself.

What the media didn’t know was that Ga On had attacked No Sang Hoon in defense. Tae In coolly got the hang of the video and released it as proof that Ga On isn’t a bully. Soon enough, No Sang Hoon started regretting his decision. Over this incident, both Tae In and Ga On started to show express themselves even more. They used to try to put up a tough front even when they were very sad or wanted to say something. The signaled the audience to always be true to themselves. However, not only is Let Me Be Your Knight full of morals and valuable lessons but also has a good mix of comedy which helps you relieve your stress. Don’t miss out on your happy pill and check out the release date, streaming details, and predictions for The Second Husband Episode 7.

Let Me Be Your Knight Episode 7 Release Date

The release date of Let Me Be Your Knight Episode 7 is 19 December, this Sunday. The kdrama releases its anxiety killer episodes every Sunday on the SBS channel at 11:05 PM KST. Excluding the perfect romance and hilarious humor, the kdrama still has a lot of cool aspects. One of them is its beautiful music. The fantasy and LUNA don’t miss out on an opportunity to showcase their amazing musical abilities. In fact, many people in the audience thought the song Beautiful Breakup was their cup of tea. Beautiful Breakup was the song that was seen as a ‘failure’ in the storyline of the kdrama. Adding another great musical touch to the k-series, Girl’s Generation’s talented member Sunny is also going to sing an OST for Let Me Be Your Knight. Surely, the kdrama will also gift us with splendid songs.

Where To Watch Let Me Be Your Knight Ep 7?

Korean viewers can watch Let Me Ne Your Knight Episode 7 on the TV channel, SBS at 11:05 PM. Furthermore, international viewers can watch the episode of Let Me Be Your Knight in Rakuten Viki with a standard subscription. Also, don’t worry if you want to be right on time to watch the episode, because we have got your back! The release time of Let Me Be Your Knight’s 7th Episode in the US is 9:05 PM, in the UK is 2:05 PM, in Canada is 9:05 AM, in India is  7:35 PM, and in Australia is 12:35 PM. What are you waiting for now, go ahead and mark your calendars for the episode!

Let Me Be Your Knight Episode 7 will definitely make your heart skip a beat. It seems like Tae In has taken Yoon Joo’s advice about opening his feelings a bit too seriously. He seems to be opening his feeling for Yoon Joo more significantly the moment, where he also asked for a pat on the head from Yoon Joo just like she did for Woo Yeon, proves the fact. Other than that, there will be a lot of tension between Tae In and Woo Yeon.

In the next episode, Woo Yeon will realize that he isn’t the only one who likes Yoon Joo and that he has competition. However, we all know that our female lead’s heart has already been stolen by the main lead. But you may never know when the second lead could win over Yoon Joo’s heart.

The Showdown Between God Candidates Begins In Platinum End Episode 12