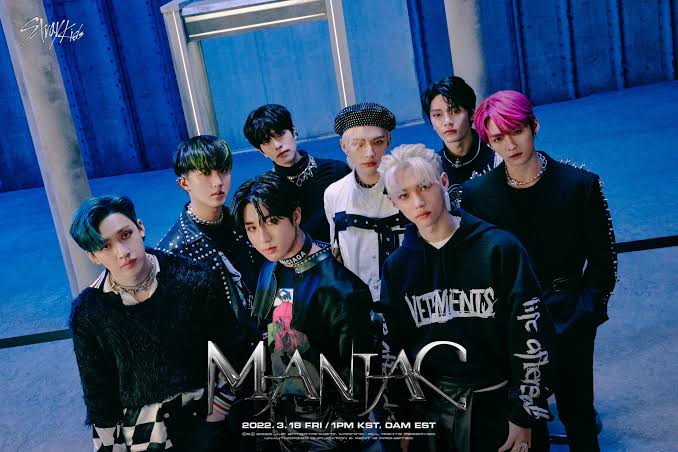 Searching for something to groove at? Stray Kids is here with a teaser of ‘Maniac’! Fans have gone beyond thrilled as the first teaser of the title track of ‘Oddinary’ has been released on March 15, 2022. The name of the title track is ‘Maniac’ and fans are surely losing their minds already over how mind-blowing the teaser is.

tray Kids was formed through a survival show of Mnet named ‘Stray Kids’ it currently has 8 members – Bang Chan, Lee Know, Changbin, Han, Hyunjin, Felix, Seungmin, and I.N. Their slogan “Stray Kids Everywhere All Around The World” is definitely coming true as the group is taking over the whole planet with their creative and exciting songs which are loved ‘all around the world’.

It cannot be denied that the group Stray Kids is reinventing themselves with each and every new song and performance. They are without doubt one of the most famous groups of the fourth generation K-pop groups. With their originality and uniqueness, they have captivated everyone. Their talented dancing, extremely beautiful singing, blinding visuals, detailed Music videos, wordplay, relatable lyrics, catchy dance steps, and groovy music beats – all of these blend together to create a marvelous synergy and bring out musical masterpieces.

Why Is The Group ‘Stray Kids’ So Famous?

The self-producing group is not famous just because it is a group from JYP. All the members of the group are extremely talented. They write, produce, compose their own songs and all the songs of the current album too have a major contribution from the members. They also try their best to go into every genre possible. Why do their songs blow our minds? Because it always has a perfect blend of creativity with top-notch quality.

The music, the choreography, the music video, the concept, and even the titles of the songs- everything has a fresh vibe. One of the most popular masterpieces of Stray Kids are songs like ‘God’s Menu’, ‘Back Door’, ‘Thunderous’, and many more. Fans have witnessed how creatively they have mixed the Korean and western-style together and it is a blessing for the eyes and ears.

Unveil tracks have been released before the release of the first teaser of ‘Maniac’. The unveil tracks are a little sneak peek on the B-sides of the album. Fans have been extremely impatient since they have made its release. The 1st Unveil track was for ‘Venom’ (Marvel Fans unite). The teaser hints that the song is related to spiders and their venom (and maybe the venom of life?).

The second unveil track was for ‘Lonely St.’. The teaser shows a rather painful side and maybe it will resonate with the pain we all felt for the past two years as it mentions “still astray”. The video beautifully uses the symbolism of empty chairs as it points out how they have been lonely for two years, and fans have felt quite emotional after just the teaser.

The third unveil track was for ‘Freeze’. And fans are again thrilled as they already know this song will be a bop. They have also pointed out that maybe the song has the concept related to mafia bosses. So to sum it up, the unveil tracks have made STAYs more impatient and they are counting every minute until the release of the album.

Now, for the teaser of the title track, Stray Kids have come to sway us with ‘Maniac’. The song has a blend of powerful beats and soothing vocals. The teaser has made it clear that Stray Kids is back to reign and we cannot deny it. The concept of the teaser is so interesting and has an amazing story that people even want a Netflix series to be made out of it.

We don’t know if that will come true any soon, but till then we can enjoy the MV and make our own theories. The teaser was released on March 14, 2022. The album is set to release on March 18, 2022. So mark your calendars, set the reminders on your phone. Because you do NOT want to miss this legendary comeback by the 4th generation boy band ‘Stray Kids’.