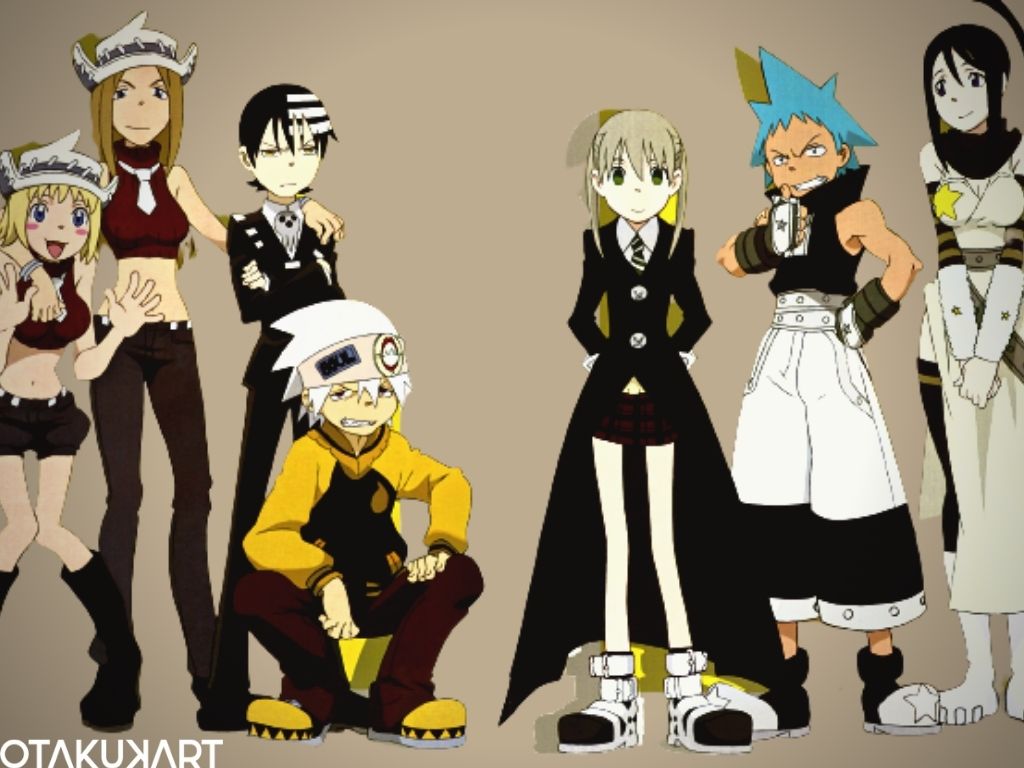 The Japanese manga series, Soul Eater is created by Atsushi Ōkubo. The manga series got its anime adaptation, and the first episode was released on 7 April 2008. Soul Eater manga was first published by Square Enix. The series then got released as three separate one-shots. These one-shots were then serialized in two of the Gangan Powered special editions and in one of Gangan Wing in 2003. The manga series, henceforth, continued its serialization in Square Enix’s Monthly Shōnen Gangan manga magazine from 12 May 2004 to 12 August 2013.

It was the one series that left fans astonished. The one series that made fans learn how to have hope and wait for the next season even after 12 years have passed. “Soul Eater” is ‘the one series’ that have left fans with confusion all over. Be it if the release date for season 2 will be revealed this year or if there will be a second season coming out, Soul Eater fans are still hopeful.

Directed by Takuya Igarashi, the anime series has a total of 51 episodes. Produced by Bones (same studio as BNHA), Aniplex, Dentsu, TV Tokyo and Media Factory, the series maybe have a possibility for a second season. However, when will it be? What may be the plot for season 2 of Soul Eater? Will the characters be the same? Questions hovering around the fans for years, let’s analyse the ‘possibilities’ of the second season of Soul Eater.

A 51- run episode, the anime series is also said to be a prequel of Fireforce. The Shinigami Weapon Meister Academy, commonly known as Shibusen, protects the world against evil, which would otherwise drag the earth to the abyss of fear, entangling people to the edge of madness. And to prevent the creature of destruction (Kishin) from awakening, the academy founded by Shinigami educates Meisters and their human weapons. To simplify, the Shinigami Weapon Meister Academy is an organization that protects the necessary peace (even Shinigami-Sama wonders why it’s a University!).

To collect 99 mislead souls, that is the souls that have transformed to the eggs of Kishin, plus one witch’s soul, then the meisters and their human weapons can achieve each’s desired goals. For human weapons, the weapons in the shape of the human form that is, Death Scythe is the ultimate goal they want and for the meister to be able to hold a death scythe, is a ranked honour. However, the last soul, a witch’s soul, is the main problem. Because the meisters and the human weapons have to confront a witch, many meisters die in the process. And if failed to eat the witch’s soul, then the meister and their weapon have to start from the starting point. Quite a task!

The first episode makes the audience curious, as well as emotional at times (when it looked like Soul Eater would betray Maka) and hence, the journey of three starts. Looking at it, do you remember all the characters from Soul Eater?

The characters of the series, at least, aren’t unlikeable. Except for the fact that Soul Eater’s VA had a more mature voice contrary to how child-like Soul Eater looks. Confused if Soul Eater is a character and not the series’ name? Well, they are both: Soul Eater (Evans), who is a human weapon for Maka and also the series’ name. Regardless, the other characters of the anime series Soul Eater, are Maka, who is the other one of the main protagonists of the series and also a meister. She is not the usual female protagonist. Her clumsiness is all calculated. She is the brain of the two (Maka and Soul Eater). Voiced by Chiaki Omigawa, Maka Albarn appears from the first episode itself. Her human weapon, Soul Eater (Evans) is more like the brawns between the two. His twisted and sarcastic personality makes him interesting. Voiced by Kouki Uchiyama, Soul is one of the main characters. 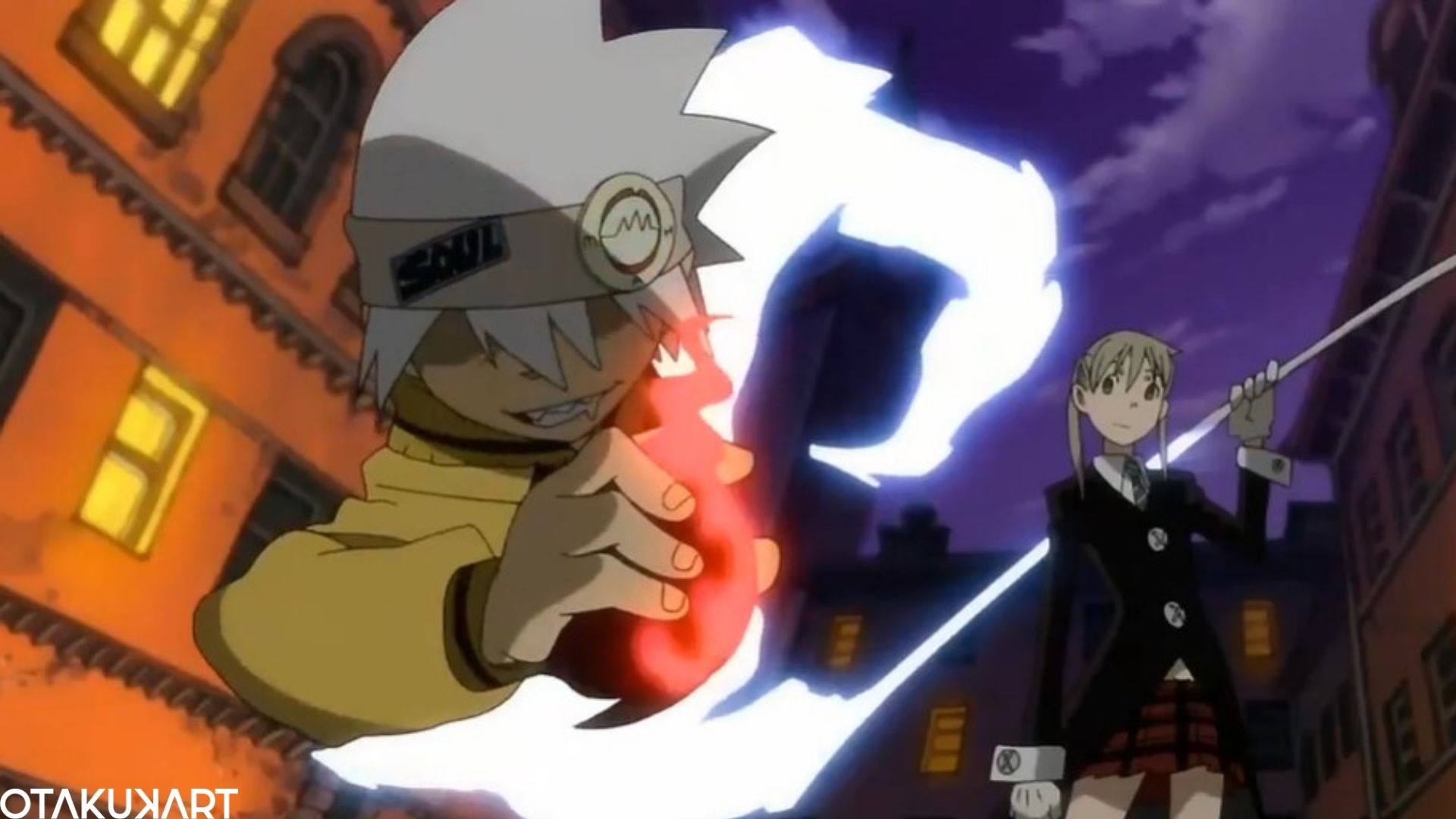 Black☆Star is another one of the main protagonists and the meister of Tsubaki Nakatsukasa. His Japanese voice actor, Yumiko Kobayashi has perfectly voiced him knowing well how much of a ‘smarty-pants’ he is! One of those instances where a female voice actress voices a male character in a series, Black☆Star’s human weapon- Tsubaki can change into a number of ninja weapons, be it a smoke bomb, a katana or so on. Tsubaki is voiced by Kaori Nazuka.

Death The Kid is another one of the main protagonists, whose personality can never be described in one word. He is a good kid with some weird additions. He has OCD and wants everything to be symmetrical. Be it an object or a human, Kid wants everything perfect which sometimes make him imperfect. While normalizing having a psychological disorder, Kid seems to be a bit off with socializing. He is mostly busy with his job of collecting souls, even though he doesn’t have to because he is the son of Shinigami. Kid is voiced by Mamoru Miyano and manages two human weapons Patricia (Patti/Patty)- voiced by Narumi Takahira and Elizabeth (Liz) Thompson- voiced by Akeno Watanabe, as their meister.

Also Read: Best Yandere Girls In Anime Series That Are Worth Watching 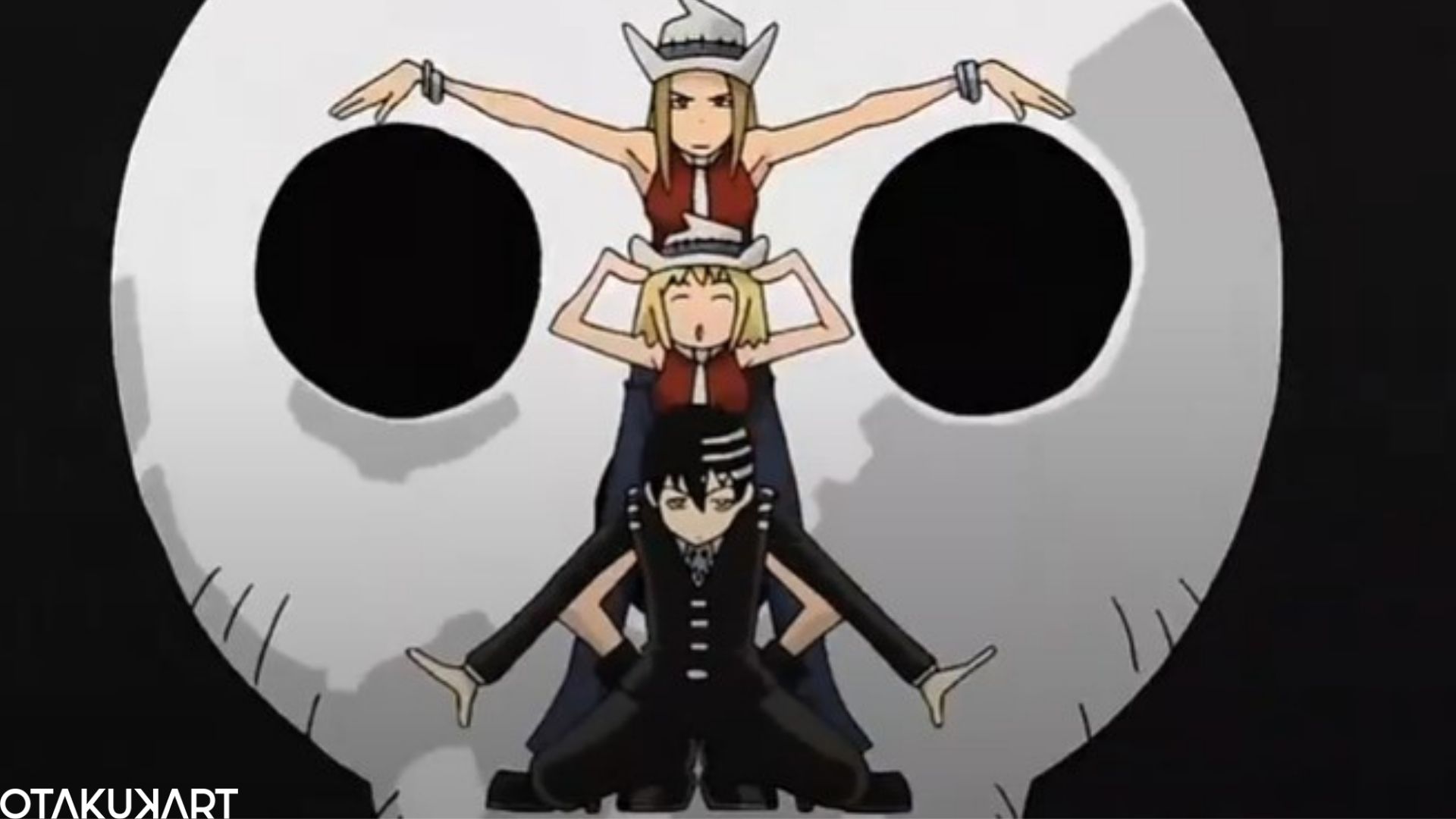 Death the Kid and Patty and Liz

The other important characters include Spirit Albarn, who is the father of Maka and a playboy. Albarn is also the Death Scythe of Shinigami- the most powerful of all. Because the other characters are all fun and likeable, fans are wondering if there will be a season 2 of Soul Eater with the same cast? However, the major question lies in “if there will be a season 2 at all?”

While the anime series may seem to deviate from the manga’s standpoint, it may actually be a good sign. There might be a slight possibility for a second season. The manga came to its conclusion only in 2014. There are still chapters from volumes to pick up from, as the anime series ended in 2009. Despite some fans trying not to be optimistic about a second season, there’s still a likelihood that the series may come out with a new season (or not). Also, no official statement about the same, as of yet.

Introducing the concept of Kishin Eggs in the anime series, it also included scenes that actually made it look better that way. Episode 6 of the anime series is one such piece of evidence, where Black Needle Wavelength is introduced in the anime series and not in the manga chapters. Also, White☆Star, Jack the Ripper, Don Al Capone, and Lupin were made to be thieves only, who did not consume souls. However, that wasn’t exactly the case in the anime series. Many characters, who were supposed to die, didn’t die and instead were left with only some fatal injuries and they recovered.

Keeping the distant memory, fans are aware of the difference between the manga and the anime story overlapping, and not, till the end. The anime may have deviated from the manga, but they are still lovable. Some concepts and scenes that were exclusive only to anime were able to be differentiated from. Keeping the fans in the dirt, there’s only a slight ray of hope that the next season may also take up the manga and take off to a different route. True that if stretched too much the quality of the plot will be ruined. However, if things go smoothly, just like season 1, then why not.

Fire Force Manga is confirmed to be the sequel to Soul Eater as it concluded. This means that it was a Second Season 2 to the Soul Eater story. The two stories surely contain a lot of similarity but still a direct sequel to Soul Eater Season 1 would be different. There is a lot for the Anime to pick from the original manga. 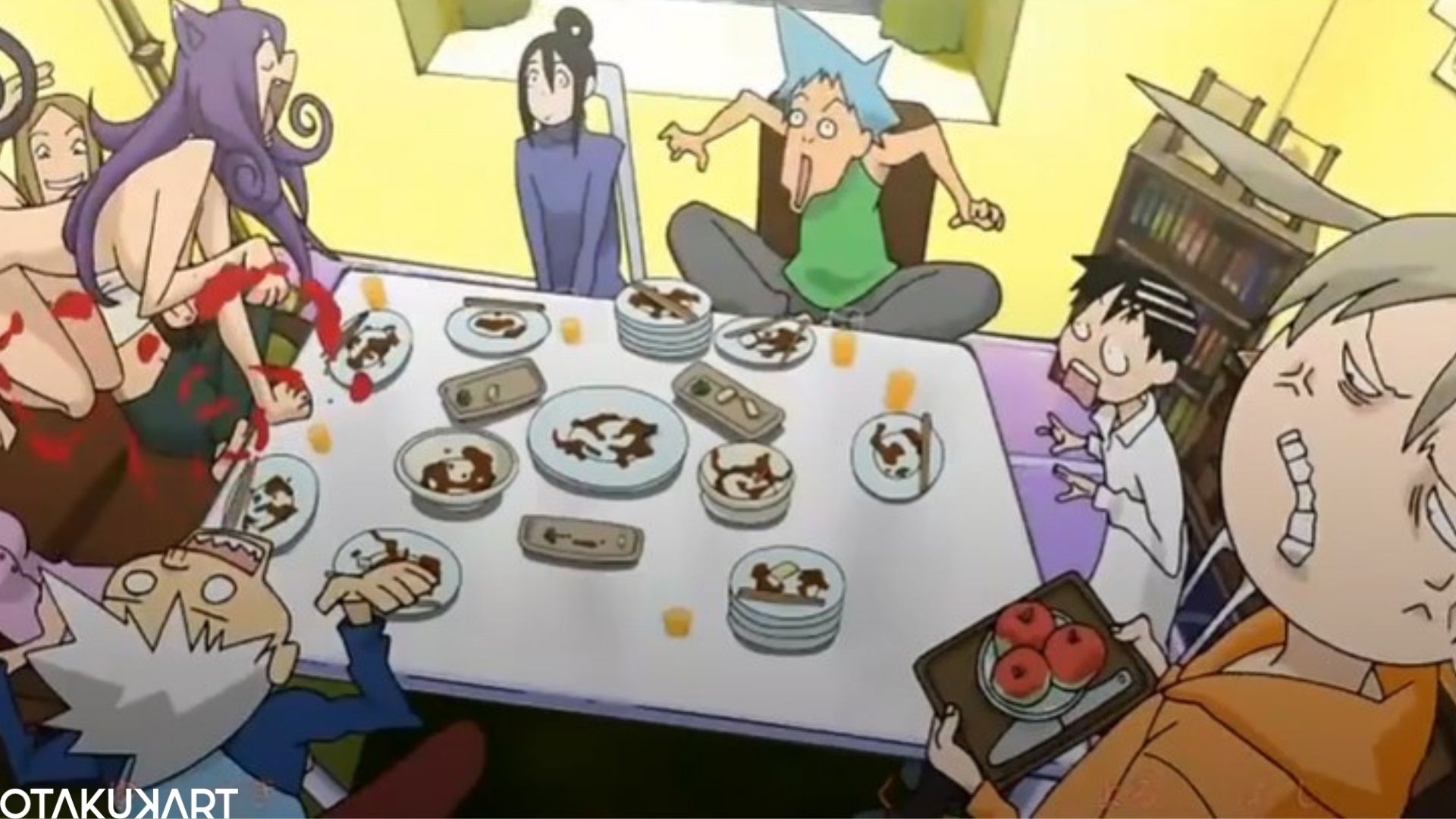 Also Read: 10 Most Anticipated Anime Series of 2022 That You Should Know About

When is the Soul Eater Season 2 Release Date?

Believing the fact that the anime series Soul Eater may come out with another season (Season 2), there’s a chance of the series’ release date to be in 2022 and/or 2023 at least. The studio Bones have not released any such statements regarding the series’ release date and predicting is the only option for all, “Soul Eater Season 2 announcement could be made soon.” There hasn’t been any official news of ‘no Season 2’ nor ‘Soul Eater Season 2.’

So, with hopes of the series to be renewed with a second season, Soul Eater is one of the anime series worth your time. (to those who are yet to watch the series).