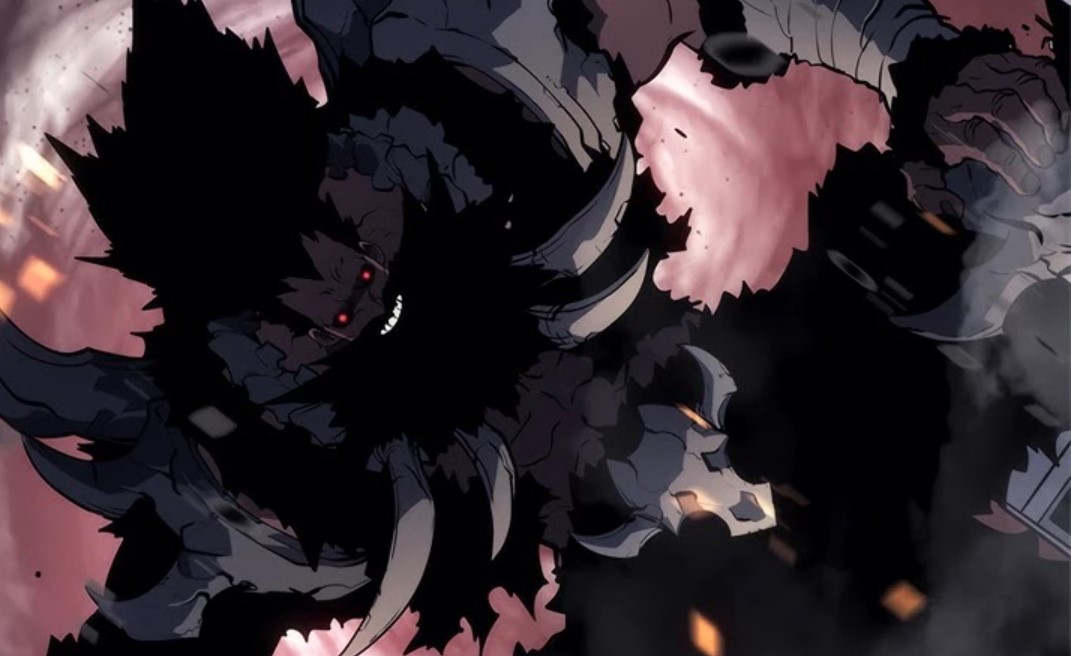 They are killing humans and no hunter or any powerful man can stop them. The whole city is in destruction with the collapsing of buildings and blood flowing. The reporters in the sky reveal that the monsters are trying to erase all traces of humanity. They are also devouring humans. The biggest giant monster appears guarding the gate alone allowing others to wondered off.

Solo Leveling Season 2 Chapter 134 will be released on Thursday, 7 January 2021. Keep in mind that every Thursday new chapter of this Manga will be released. You can get the latest updates of the previous chapter using the following link Solo Leveling Season 2 Chapter 133. The next chapter’s spoilers are not yet available; you can take a look at the following recap and ways to read this Manga below.

The reporters think that the bearded giant monster might be waiting for someone or just holding the gate. When they look closely at the bearded giant monster it seems as if it is not alive. The bearded monster is standing just like a statue holding a lighting sword that can slay a human in an instant. Later the monster tries to breathe and move but like a robot showing that it is alive. The reporters are just shocked recording everything that is happening.

It has been revealed that out of 31 giants that came out of the gate. Only two have been eliminated and the reporters are wondering how long has it been since the Dungeon break. One of the reporters reveals that it has been two days since the Dungeon break happened. They are worried if someone will be able to stop the monsters before they cause too much damages.  Meanwhile, Yoo Jin-Ho is surprised hearing Sung Jin-Woo revealing that he is going to Japan.

He then concludes that it means the incident is really scary. Yoo Jin-Ho decided that he will go with Sung Jin-Woo since he kept on leaving him behind. He talked about the Red Gate incident, the Jejudo Raid, and the recent Double Dungeon. He then asks Sung Jin-Woo if he knows what those things have in common. Sung Jin-Woo replies that he doesn’t know and Jin-Ho said it’s that he is nowhere to be found in any of them.

He showed Sung Jin-Woo an article on the new S-Rank Hunter. He wasn’t there but Sung Jin-Woo was and the only thing he can be proud of when he is with others is only that he has been always by Sung’s side. Yoo Jin-Ho adds that Sung is the source of his pride. He showed Sung all the articles that he is not even there but he wished to be there. Sung Jin-Woo comments that he doesn’t think that is what a child of a rich family should be saying.

Yoo Jin-Ho begs Sung Jin-Woo to go with him. He reveals that he likes to be where he is all the time and Sung said he was just advising him not to go. He then asks Jin-Ho if he remembers where he is going. Jin-Ho continues to beg him saying that he trusts him and he knows that he will be safe when he is around him. Sung Jin-Woo tries to think of an excuse to fool Jih-Ho so that he wi stop begging him.

After a moment of silence, he reveals that he was joking about going to Japan. He can’t go there at a time like this and he asks Jih-H0 to go home after finishing his work. Jin-Ho notices that Sung is trying to full him but he left him alone. While Sung is walking on the street realise that during his last battle he wasn’t able to use his shadow soldiers. The Architect was almost strong as him even though he is over level 100.

He now knows that it means that there are still many that are stronger than him. He thinks that he will find out the solution to his problem if he goes to Japan. He then reaches home wondering if he is trying to act like he is a hero or not. His mom welcomes him and tells him that the dinner is ready and he got served. During the dinner, he asks about Jin-Ah and his mom said Jin-Ah doesn’t have an appetite.

He then realise that there is something he has to clear and choose in it. He uses his shadow clone and met with Yoo Myung-Han returning the check money he has offered to him. Sung refuses to help Yoo Myung-Han and chooses to protect his family. Yoo Myung-Han asks how did his mother recover and Sung refuse to talk about his family’s privacy. He left with worries that it is Jih-Ho’s father and he doesn’t know him well if he is scheming something or not.

Sung realizes that there is a limited number of holly water of life and he has to use them wisely. He then went back home and enjoy his dinner and decide that if he has to choose he will choose his family. Sung reveals to his mother about his trip and she said she will help him pack.

She told him that he is like his father he always leaves in the middle of dinner. Later he met with his sister and comforts her but she is worried that he is leaving. The next day he left for Japan and Jih-Ho met with him at the airport. He then realizes that Jih-Ho is going with him and they leave together. It has been revealed that S-Rank Sung Jin-Woo is Ahjin Guild Master. D-Rank Yoo Jin-Ho is Ahjin Vice -Guild Master.

You can access Solo Leveling Season 2 latest chapters available on Kakao Page Magazine, so you can support the creator by buying the magazine. We highly advise you to support the official release as it supports the creators. Note that there are no official ways to read this Manga.