After Hee Ok, Park Ki Tae approaches Ok Hee and tells her that Ha Ru is his son. Also, So Ri and Ha Ru takes their wedding photos and plan to move to the U.S soon. 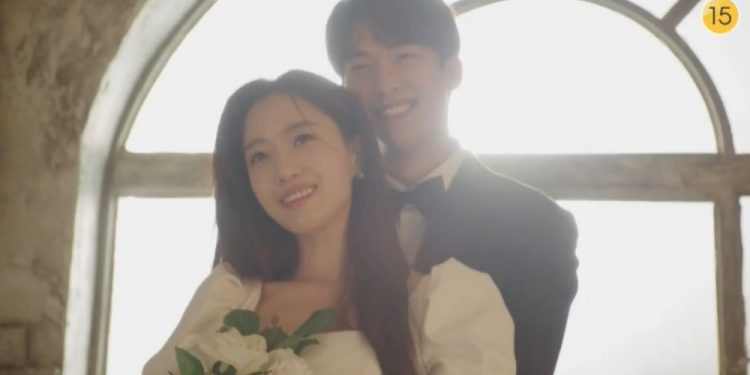 So Ri and Ha Ru's marriage

After finding out about Ha Ru and Hee Ok, the mystery man approaches Gwang Nam. Everyone knows Park Ki Tae as the man who was madly in love with Ok Hee in the past. Now he is back after 30 years to claim his son Ha Ru. When he confronts Hee Ok, she startles and says that Gwang Nam is Ha Ru’s father. Later, everything clears up when she tells Gwang Nam the truth in ‘Love Twist’ episode 22.

Ok Hee finds out that So Ri plans to leave the country with Ha Ru. This is because her family won’t accept their relationship. Hearing her daughter say this breaks Ok Hee’s heart, and she calls her an evil witch. At night, when she tells this to her husband, he is still insistent that Ha Ru and So Ri cannot marry. Also, Ok Hee finds out that Gwang Nam has not ended things with Hee Ok.

Till now, we have seen that Park Ki Tae confronts Hee Ok about who is Ha Ru’s father? In the heat of the moment, she says that Gwang Nam is his father. However, this is not true, and Hee Ok lies only to protect her son. 30 years ago, Park Ki Tae use to be in love with Ok Hee. He wanted to marry her, but she was already engaged to Gwang Nam. When he makes a scene on the street, Hee Ok argues with him and tells him that he is not good enough for her friend. As Ki Tae is very drunk, he hits Hee Ok and rapes her. This is the reason he thinks that Ha Ru is his son.

Park Ki Tae even visits Gwang Nam and tells him that he is Ha Ru’s father. Still, he mentions that Hee Ok said that Gwang Nam is his father. This confusion is cleared up when Hee Ok tells Gwang Nam the truth and why she does not want to reveal that Ki Tae is Ha Ru’s father. Both Hee Ok and Gwang Nam want to protect Ha Ru from this man who ruined Hee Ok’s life, but this is another reason Gwang Nam doesn’t want him to marry So Ri.

So Ri’s Mother Calls Her An Evil Witch

So Ri and Ha Ru wait for Yoon-ah all night, but she does not come home. The next day she arrives with a hangover, embarrassed about sleeping with Ha Ru’s friend. However, she does not tell this to So Ri. Later that day, So Ri meets her mother in a cafe. Ok Hee asks her to come back home and forget about Ha Ru. At this point, So Ri reveals that she is going to the U.S with Ha Ru and will not come back. Hearing this breaks her mother’s heart, and she calls her an evil bitch.

So Ri’s grandparents try to convince Gwang Nam to stop being stubborn and give his permission for So Ri and Ha Ru’s marriage. However, he is firm on his decision to not let them get married. Later, Ok Hee tells him that she won’t give him a divorce as she doesn’t want to break her family because of Hee Ok. When she finds out that Gwang Nam is still seeing Hee Ok she is furious. On the other hand, Park Ki Tae keeps pressuring Hee Ok for a DNA test, and this makes her feel vulnerable.

The ‘Love Twist’ episode 22 release date is 11th January 2021. Late at night, Hee Ok calls Gwang Nam and tells him that she will die as Park Ki Tae keeps harassing her. He consoles her, saying that he is with her and she does not need to be afraid. Later they realize there is an equally important problem. Ha Ru and So Ri take their wedding pictures and decide to get married in the U.S. Will Gwang Nam and Hee Ok be able to stop their children from making a mistake?

Where To Watch ‘Love Twist’ Episode 22?

‘Love Twist’ Kdrama is a television series broadcast by the KBS2 network. People living in South Korea can stream the upcoming episodes of ‘Love Twist’ on the official network. As for international fans, they can watch the ‘Love Twist’ episode 22 on the subscription-based website Rakuten Viki.

Will Deku Become the Number 1 Hero? Will He Surpass All Might?