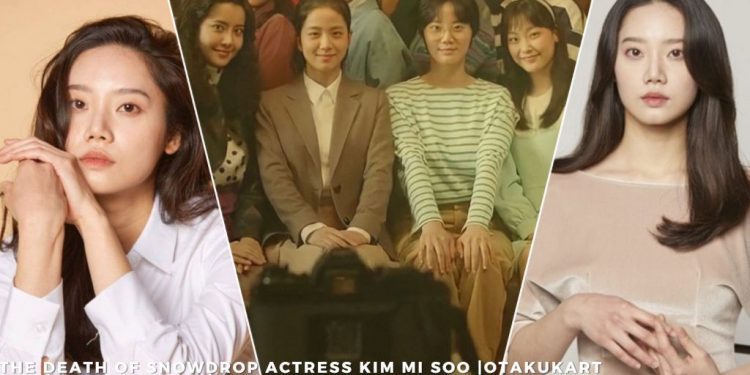 Fans have been utterly shocked by the news of the death of Kim Mi Soo. Kim Mi Soo, who plays the brave character of Yeo Jung Min in the currently airing kdrama Snowdrop, has suddenly passed away. At the young age of 29, Kim Mi Soo, who was well on her way to success, was confirmed to be dead by her agency Landscape Entertainment on the 5th of January. Furthermore, her agency has revealed that Kim Mi Soo’s funeral service will be held at Taeneung Sungsim Funeral Service. This heartbreaking news shook the ground of her family, friends, and fans. She plays a strong-willed student activist who fearlessly stands up for what she believes in the popular drama Snowdrop.

Fans who were watching the drama could not believe that this heartbreaking news was actually true. In a statement released by Landscape Entertainment, they have asked fans to refrain from making groundless speculations about the precious actress’s death. They have asked fans to lend support and prayers to the bereaved’s family and friends during their time of her hardship. As per the wish of Kim Mi Soo’s family, her funeral will be held in private. Additionally, Kim Mi Soo’s agency offered their deepest condolences to her family in their official statement. The cause and circumstances surrounding her death are yet to be revealed.

The death of the 29-year-old actress Kim Mi Soo has brought unmeasurable grief and shock for her admirers. Furthermore, the actress was born on the 16th of March in 1992, which makes her 31 in Korean years. From the moment that she entered the acting industry, Kim Mi Soo was a star to look out for. Additionally, her first role was Jo Yeon in the critically acclaimed South Korean movie Lipstick Revolution in 2018. She went on to grace us with her talent with more movies like Kyungmi’s World 2019 and Memories in the same year.

Moreover, Kim Mi Soo’s debut in the kdrama world was as Jung Ji Hyun in Drama Festa. Kim Mi Soo had also proved her acting abilities through her roles in popular kdramas such as Yumi’s Cells, Hi Bye, Mama!, Into The Ring, Hellbound, The School Nurse Flies, and Snowdrop. It is truly a huge loss that an actress with such immense talent had to leave us at such a young age.

Our greatest condolences to her friends and family!

GTA V Cheats: How To Use The Cheats On PC, PlayStation and Xbox?