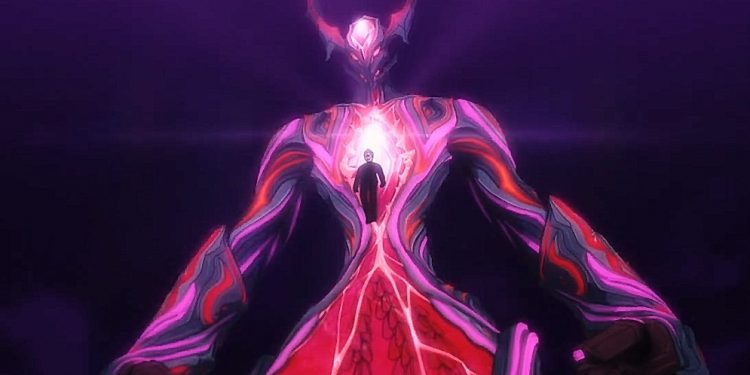 The Myojin Family is well-known for producing a Shrine Maiden that stops the Onis from taking the world. Oka recently became the Shrine Maiden and was tasked with stopping the Onis with her team. She met with Kippei and Kakareru in the town, who helped her find her team. Oka realizes Kakeru would be helpful and suggest he join their team, but Ryo underestimates him believing that he is a mere human who will die instantly during the battle. But they had no clues that Ibara chose Kakeru to wield him.

Later, they accept Kakeru to join the team after learning that he can control Ibara and even save Ryo, who has Kakeru’s respect. The Myojin Family disapproves of that, believing that Kakeru might be working with the Onis and put him under their custody. Oka and Ryo defend Kakaeru, but Oka’s sister Benio refuses to listen. Benio puts Kakeru on the test and learns that Kakeru is a hero after showing her that Ibara is the ultimate duo. Ryo learns that Oka’s father, Shuten, pulls all the strings.

The Myojin Family holds a Shrine Maiden Ritual realizes that the world is dangerous, and Oka must close the gate between the Nether Realm and Human Realm. Oka accept that even that would also cause her death. She bid farewell to her family and begins with the Shrine Maiden Ritual. But Kakeru learns that they can do something, and Oka won’t die; he heads to the Shrine with Kippei to stop the Oka’s sacrifice. The two face the Onis, and Kakeru leaves the scene since Kippei decided to handle the Onis. Kakeru tries to convince Benio to stop the Ritual, but Benio refuses until she hears Oka screaming and head to the scene.

Shuten revealed his true colors after beating Ryo. But Haruko protects Ryou. Shuten reveals that he was waiting for the moment since he would become the God and the ruler of the world after gaining all the powers of the Onis, and everyone would bow before him. He reminds Oka that her duty is over and must die on his hands. Oka felt betrayed, but she was not afraid to die at the hands of her father. Shuten wants to smash Oka, but Kakeru arrives and saves her. Kakeru decided to stop Shuten, who has turned into a monster.

The Myojin Family learned that the head of family Shuten is the traitor who has been using them for many years to achieve his “God” goal. Shuten reveals that he is the Nether Realm, and it belongs to him, and every living creatures will thrive in the Nether Realm. His powers begin to consume the world. Kakeru had a flashback, but when he wakes up, he helps Oka to take down his father. Kakeru cut through Shuten and headed to the Nether Realm with Ibara, who sacrificed to close the gate; then, Kakeru returned and reunited with Oka and the others.

Will There Be Shikizakura Season 2?

The Twitter official account and official Anime’s platforms are yet to confirm the return of ”Shikizakura Season 2.” But more updates and the latest news of this Anime will be announced online as 2022 begins. However, you can visit the following official website to learn more about Shikizakura: ANIPLUS, Bilibili TV, and Amazon Prime Video DE. Those who miss an episode finale can read it here: Will Oka Close The Gate Between The Nether Realm and Human Realm In Shikizakura Episode 12?.

Also Read: Irina: The Vampire Cosmonaut Season Finale and Ending – Will there be a New Season?.

Who Does Bell Cranel End up with in ‘Is It Wrong to Try to Pick Up Girls in a Dungeon’?