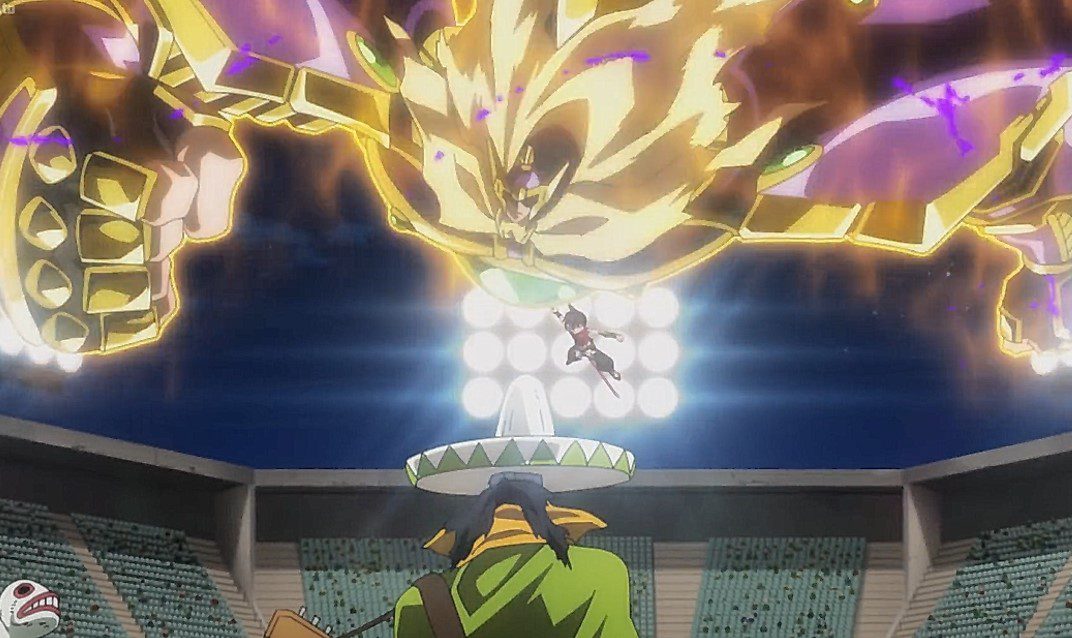 Peyote comments that they are Calvera Dolls. Asakura Yoh is sitting with Anna, who said that they are Skeletons of Mexico. The Skeletons of Mexico are symbols of death. Anna reveals that in Mexico, they celebrate the day of death once a year. The dead return to this world, and the villagers celebrate by playing with the ghosts. For the Mexicans, the dead are friendly and cheerful. During that day, Calavera Dolls decorate the village and play an important role. The episode title is ”Chocolove’s Christmas.” Ren comments that the Calaveras are symbols that link life and death.

Peyote uses bones as his medim. Peyote said, ”El es correcto!” supporting Ren’s comments with Mexican language. Peyote adds that he is a cheerful Shaman who plays with the dead. When his guitar resounds in their soul, the ghost dance and protects him, but they destroy the foes. Peyote decided o use Carlos and Juan’s corpses as his medium. He won’t fight; he will play the guitar, and the dead with Calavera Dolls will fight for him. Manta feels sorry for the Boz brothers, and Faust VIII feels the same. Faust realizes that as a bone-user, he finds Peyote despicable.

Peyote said that the two were weak, and they pursue a dream that is far beyond their reach. But the Boz ended up meeting dead, and he calls it stupid. Peyote adds that the Boz brothers consider it an honor to be allowed to aid Hao. The Boz brothers exchanges powerful strikes with Chocolove. Chocolove said that his Shaft would blow them away. Peyote thinks that is what makes Chocolove a fool. Hohorohoro wonders what Chocolove is doing since he is crouching when the Boz brothers are hitting him.

Horohoro shouts at him to finish the Boz brothers with a single strike. Chocolove got pinned to the ground, and his O Descendent of the Black Jaguar powers vanishes. Chocolove realizes that he can’t see anyone dying anymore. Peyote comments that Chocolove is stupider than he thought. Chocolove wonders what gramps would have done if he was in his shoes. He recalls the day he celebrates Christmas with his gramps. Chocolove was a gangster and used to destroy every present since he lost everything Christmas. Back to the battle, Chocolove defeated Boz Brothers, and Ren decided to join the fight. Ren defeated Peyote with a single punch, and Hao realizes that Peyote never stands a chance due to Great Spirit.

You can watch Shaman King: (2021) Episode 21 online on Netflix and bilibili. Shaman King (2021) will officially update online daily news on the website. This anime is on Nextflix with English subs.