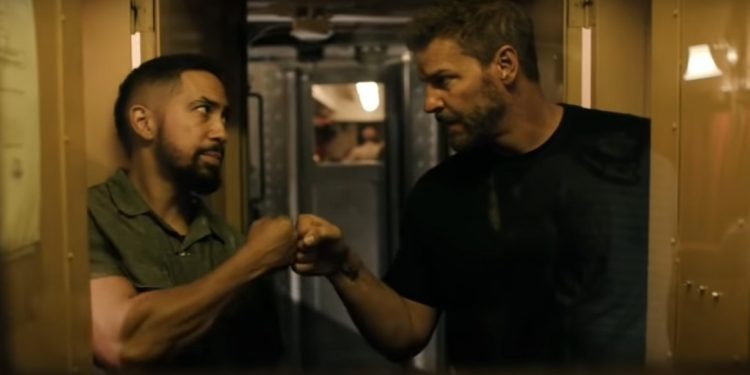 With this installment of the armed forces drama by David Boreanaz, the lives of these Elite squad members are getting ever more complex. On Seal Team Season 5 Episode 10, we are seeing how the separation from home affects these men and their loved ones. Moreover, just as Bravo Team teamed up with the British for a mission, On American soil, Clay and Stella are going through turmoil in their lives as their baby’s life is in deep peril due to her early birth labor. Is it getting any more complex?

The Clay and Stella plotline will have a major impact in the remainder of the episodes of this season. We will know If the couple finds a way to move on from their troubles, or if they drift apart due to personal tragedy and miscommunication. Additionally, from what we’ve seen from other episodes, they are in need for love from each other. Also, what if something awry happens to Clay during deployment with the elite task force? It’s part of the job, sure. But then again, its part of the job.

Seal Team Season 5 episode 10 will release on December 5, 2021, at 12:00 AM on Paramount+, Eastern Time of the United States of America. Firstly, every new episode drops in a consistent manner on Sundays. Moreover, chapter 10 will be the last one of the year. After that, the show will continue in January 2022. Secondly, this fifth season consists of fourteen episodes, for episode ten, this implies that most plotlines are reaching a climax. What’s in store for these men of arms and their families? In the remaining episodes, we will learn about that. Lastly, each episode has 43 minutes of running time.

Where to watch Seal Team?

If you wish to watch Seal Team, then you must navigate to Paramount+ since CBS chose to move the show from the network to that platform, that’s your best bet. But if you don’t have Paramount+, the internet still offers you a few options to watch this program. Firstly, you can catch it via Amazon Prime Video, by adding Paramount+ as an add-on to your essential subscription. Additionally, if you wish to catch up on the first four seasons to comment with your friends and family, you can do that on platforms like The Microsoft Store, Vudu, Google Play and iTunes.

Bravo members’ and their families lives are more difficult than ever. SEAL Team Season 5 Episode 9 was another great episode, with drama, high stakes, and surprising cliffhangers. We’ll start with Jason since he endured a lot during “Close to Home.” Additionally, It was bad enough that his visage was being circulated, but learning that his personal information was also being circulated was terrifying.

If you watch SEAL Team online, you’ll see he’s been dealing with it for a while, but this discovery nearly pushed him over the brink. Additionally, gathering his family was unsurprisingly difficult, especially given his rocky relationship with his father. Moreover, if his father meant what he said about Alana asking for assistance while he was overseas to give him some perspective, he’s done the reverse.

Jason was devastated when Alana died because he knew he wasn’t the greatest spouse, and now he’s wracked with even more guilt. Furthermore, Jason’s underlying problem has always been that he holds his emotions close to his chest. On the other hand, talking things out with loved ones might be beneficial at times. But Jason struggles to express his feelings.

After researching the signs, he realizes he most likely has a TBI, and I have to appreciate the program for always bringing this to light. On that point, Jason’s main problem is that he excludes everyone from his life before opening up to them. On another point, Mandy was furious that he had abandoned her in the hotel room. But she knew that Command came first. A part of her wished Jason would be really upfront and honest with her. She would have altered her trip to assist him, but he continued to suffer in silence.

Every episode, David Boreanaz kills it as Jason, and the authors are actually coming up with contemporary and meaningful plots for all of the characters. Firstly, the one advantage of Jason having to go into hiding was that he couldn’t participate in the case of the week. And there’s no knowing how poorly it would have turned out if he had been there. Secondly, Jason is not a nasty person, but his inability to receive assistance or establish limits harms his teammates. Trent has had to take some time off as a result of the events in SEAL Team Season 5 Episode 8.

Jason will be informed about all that is going on at some time, and it will be terrible to witness his struggle reach dizzying new heights once he realizes the whole scope of what has occurred. Furthermore, the last-minute discovery that Stella’s waters had ruptured was terrifying. She and Clay had been planning this life since finding she was pregnant, and if the baby dies, it will be devastating to them.

Clay made a broad comment about leaving the Bravo squad when the baby came. That gave me hope that the pregnancy would go through without a hitch, allowing me to imagine his predicament when the time came to take that leave. With the evolution of the plots and the surprises tossed in for good measure, the authors are knocking it out of the park.

While Clay and Stella’s narrative was bookended by a possibly life-changing event, Ash received encouraging health news. Time must be flying by since it seems like this drama has just begun. Still, the tumor is shrinking should portend well for his future. It’s been good to watch Ash and Clay get along instead of fighting at every opportunity. Now, if the father and son can really mend what was damaged, the anguish they’ve gone through may have been worth it.

How is Sonny moving forward?

For the remainder of the season, Sonny’s attention will be drawn to Hannah. They may settle down and raise a family if she accepts to live in with him. Additionally, Sonny’s sentiments for Davis, on the other hand, unquestionably outweigh everything else, even his own aspirations. Hannah will be under a lot of strain, and she may have to uproot her own life in order to be a part of his. Finally, a terrible turn of circumstances will hinder Bravo’s next mission.

Sonny’s mistake and its discontents

Sonny’s failure to inform Hannah about the hospital was alarming. Hannah has given up her bar and relocated to a new location to be with Sonny, and he is concealing information from her. Perhaps he didn’t want to frighten her away, but communication is the most important aspect of any relationship. If one person in the relationship is concealing something, it begs the question of what else they are concealing.

The show desperately wants us to ship Sonny and Davis, as evidenced by the scene at the bar. Additionally, Despite her decision to remain at home, Mandy ends up hooking up with Jason. However, it appears that she has deeper concerns lurking beneath her pleasant exterior. Jason’s team members, particularly Sonny, are hesitant to trust Mandy because she has previously broken his trust.

The fallout from Sonny’s actions

Meanwhile, Sonny invites Hannah to live with him after realizing that Davis is not interested in crossing the professional line between them. Now that Sonny wants to create a family, he believes contacting Hannah can help him do it. Clay confronts his father about the troubles between them that he has kept hidden his whole life. His father has been diagnosed with a fatal disease, creating a feeling of urgency in their relationship.

Clay admits his shortcomings and vows to be a better parent when he has his own child. Ray and his daughter come upon a soldier who recounts his traumatic adventure during his time in the service. For one part, Ray is first hesitant to believe the veteran’s statements. But changes his mind as he discovers the veteran is telling the truth about the terrible things that occurred to him. Lastly, Ray is finally confronted with a terrifying realization about the military department.