Sang Hyuk and Jae Min have commenced their fiery battle! 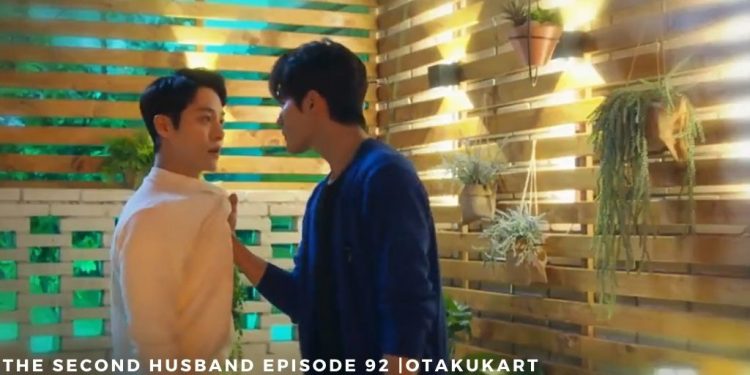 The Second Husband Episode 92 is just a few days away! At last, Seon Hwa has found out that her son was alive all this time! Other than it seems like, at this rate, Sang Hyuk and Jae Min have been fighting over Seon Hwa. We all know whose side the audience is going to take. It is evident that the audience and Seon Hwa adore Jae Min while all of us despise Sang Hyuk. Sang Hyuk didn’t treat Seon Hwa properly since day one. He broke her heart by cheating on her with Jae Kyung for money. Then he helped in killing her grandmother and also kept the secret safe that Jae Kyung had killed Mr.Nam which was the murder Seon Hwa was framed for. But the worst lie he had said by far is his son’s death.
He lied to Seon Hwa that Sae Byek died when he fell ill but the truth was that he and Jae Kyung adopted Sae Byek as Tae Yang so that they can hide the fact that Jae Kyung had a miscarriage. On the flip side, Jae Min has been helping out Seon Hwa ever since he got to know her. Although they didn’t like each other at the beginning, as the drama progressed, they cleared up the misunderstandings they had about each other. Plus it was his idea to make Seon Hwa turn into Sharon. He risked his money and parents’ trust so that Seon Hwa can get her revenge. Find out what Jae Min and Sang Hyuk’s fight will lead to and check out the release date, streaming details, and predictions for The Second Husband Episode 92.

The release date of The Second Husband Episode 92 is December 27, this Monday. The Second Husband updates fas with new episodes almost every day at 7:15 PM KST. It comes as no surprise that the two main leads have been finding it hard to get along. Sang Hyuk who still likes Seon Hwa gets jealous whenever Jae Min is around her while Jae Min naturally hates Sang Hyuk for all that he has done to Seon Hwa. Just like Jae Min, fans can’t believe the guts of Sang Hyuk to say that he had never done anything wrong to Seon Hwa. He still hasn’t realized that Seon Hwa has been using him to keep her identity a secret. The audience can’t wait to see his face when he learns about this!

Where To Watch The Second Husband Ep 92?

The audience of the kdrama can watch the episodes of The Second Husband on their TV screens themselves. They can tune in on MBC Mon-Fri at 7:15 PM KST on the kdrama’s broadcasting channel MBC. Also, the international viewers can watch Episode 92 of The Second Husband either on Rakuten Viki or on Kocowa both available only with a standard subscription. The release time of the 92nd episode of the kdrama is in the USA, 10:15 AM in the UK, 3:45 PM in India, and 8:45 PM in Australia. Don’t forget to mark your calendars for the exciting episode!

The Second Husband Episode 92 will surely be a lot of fun! In the preview of the next episode, Je Min could be seen landing a punch on Sang Hyuk’s face. Unspurisngly it is well-deserved! When Sang Hyuk said that ‘Seon Hwa is my woman’, Jae Min gave him a reality check. He told him for Seon Hwa he is a mere criminal who needs to be punished. Sang Hyuk totally deserved to be told the clear truth!

Is Sang Hyuk going to reveal Sharon’s true identity out of anger? Or will he help her out by giving handing her the evidence that proves that Jae Kyung was the one who murdered Mr.Nam? Will he do that thinking Seon Hwa will start liking him? Or is he planning to do something really bad with Jae Min? Don’t miss out on the upcoming episode to see what happens next!

Also read: Top 8 Spectacular IU Kdramas That Prove She Is A Talented Queen

Mirai Kakehashi: Character Analysis – Is he a Good Protagonist?