Episode 3 showed us what a foolish womanizer King Edward is. Just when everything was ready for his marriage with the French lady, he fell for a widowed Lancastrian lady, Elizabeth Woodville. It turns out that Elizabeth bears a profound grudge towards the York family for killing her husband and intends to make them suffer after becoming the new queen. Totally unaware of Elizabeth’s evil intention, Richard takes her to the forest and confesses his love. Can Edward foresee the inevitable betrayal from his lover in Requiem of the Rose King Episode 4?

Incidentally, Richard saw Elizabeth and Edward together in the forest. She couldn’t help remembering the dreadful memories of the past where her body was exploited in a similar way. Just as she was about to leave, Edward caught her and threatened her to keep it between them. I doubt if she can protect her brother from the downfall that awaits him.

Requiem of the Rose King Episode 4 Speculation and Spoilers

In Episode 4, Elizabeth will start showing her true colors, thereby turning the York King into her puppet. To Warwick’s despair, King Richard’s eldest son didn’t grow up to become the worthy ‘King’ he wanted to see. From the way the first three episodes covered a season’s worth of story, it’s clear that Episode 4 will show us Richard’s downfall. He will most likely turn down the French lady’s marriage proposal and marry Elizabeth instead. A Lanchesterian gaining the queen’s position will certainly be bad news for the kingdom’s political stability.

Episode 3 starts with Richard arriving at the royal capital to find her father’s beheaded body. Meanwhile, Edward and Warwick mourn for the King’s death and profoundly vow to keep moving forward for their King’s sake. The York army penetrates deep into the Lanchester-occupied territories, and one after another Red House battalion falls. The Lanchester Queen finds herself surrounded by the enemies in no time, thereby ensuring York’s victory.

Meanwhile, Richard goes completely insane after her father’s death. The world has turned black and white without her father, and it seems that blood-red is the only color she can acknowledge anymore. She keeps slaughtering the enemy soldiers till she falls unconscious from exhaustion. The York soldiers find her and carry her back to the royal palace.

Richard has changed drastically ever since that horrific day. She is neither afraid of woods nor of darkness and is ready to do anything to protect the dignity of the King’s name. The kingdom gradually goes back to normal, followed by extravagant celebrations to cheer up the new King. Apart from that, Edward is all set to marry a high-ranking French Lady, which would lead to huge political benefits for the Yorks.

At such a royal party, a Lanchestrian lady, Elizabeth Woodville, shows up and begs Edward to give her back the confiscated lands of her dead husband. Edward has always been a Womanizer, and he immediately gets captivated by Elizabeth’s beauty. He assures her that all the land she deserves will be given back after the celebration. However, Elizabeth’s evil smirk made it clear to the viewers that she had other evil motives.

Elizabeth Captivates Edward with Her Beauty

A few days later, Edward proposes his brother go hunting into the woods. However, this was just a show, and his primary motive was to meet Elizabeth secretly. After meeting her, Edward bluntly says that he is in love with her and wants to sleep with her. Agreeing instantly would have seemed shady, so Elizabeth draws out a knife and says that she can slay a King to preserve her honor. This is the first time Edward gets rejected, so he gets even more desperate. Elizabeth further manipulates him to agree to make her the queen and eventually sleeps with her as a reward. Moments later, he catches Richard eavesdropping on their conversation and warns her not to tell this to anyone.

Requiem of the Rose King (or Baraou no Souretsu) Episode 4 is scheduled to release on Sunday, January 30, 2022, at 22:30 JST. People living in USA, UK, and other Western countries will be getting the episode a few hours earlier due to the difference in time zones. Every new episode generally comes out on Sundays, unless there’s a delay or other change in the broadcasting date.

Where to Watch Requiem of the Rose King?

New episodes of Requiem of the Rose King are currently streaming on anime streaming platforms like Netflix (Japan only) and Funimation. Apart from that, the series is also broadcasted on the Japanese television network, Tokyo MX, every week.

Also Read: Will Kitagawa Miran Dress Up as Shizuku-tan in My Dress-Up Darling Episode 4? 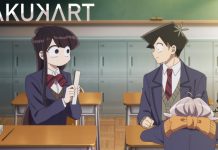