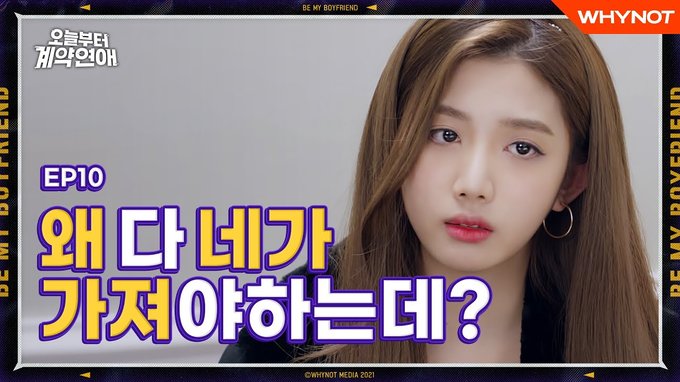 Be My Boyfriend Episode 10

Known as Oneulbuteo Gyeyakyeonae, Be My Boyfriend is all set to be another addition to your list of K-Dramas with the quintessential plot of a high school story between a set of teenagers. It has been categorized under the comedy, romance, youth, and drama genres. Cast in the main roles, Be My Boyfriend has Shin Hyun Seung as Lee Seung Min, Lee Shi Woo as Oh Ji Na, Choi Yu Ju as Seong Han Na, and Im Sun Kyun as Ku Hyung Tak. As supporting actors, Kim Byeong Kwan as Oh Ba Ul and Jung Bo Min as Joo Min Ji were cast.

Lee Seung Min is an ordinary high school student, often ignored by the common eye in his high school. However, as fate would have it, Seung Min has a crush on the Queen Bee in their high school – Oh Ji Na. She also happens to be an idol trainee preparing for her debut. One day, about certain twists in the storyline, Oh Ji Na proposed that she and Seung Min start a fake relationship. The rest of the storyline deals with how Ji Na and Seung Min continue being a fake couple without getting caught. The story also follows their different friends’ lives and what fate has in store for all of these kids.

Be My Boyfriend Episode 10 Recap

Be My Boyfriend aired the 10th episode of the series on 30 March 2021. The 10th episode starts with Seung Min and Ji Na kissing in the park as Han Na sees them. The next morning there is a small turf between Han Na and Ji Na where Han Na shouts at her, saying how she always wants everything to herself and walks out. Hyung Tak goes behind her and confronts her about liking Seung Min, which she doesn’t deny. Hyung Tak, who also likes Ji Na and Han Na, decides to wait for the right time to confess their feelings.

Later, at the studio, Ji Na apologizes to Han Na for the quarrel back at home. Han Na doesn’t say anything right away because they are interrupted by the other trainees and their manager. The manager announces that Han Na needs to pay 10 Million Won to the agency as investment money. Ji Na goes against the manager to support Han Na as agencies are not supposed to demand their trainees’ money. But Ji Na has to walk out of the studio alone as Han Na agrees to talk to her mother about paying the sum. Later, as Ji Na walks into the night, she realizes how cold Han Na has become as she has flashbacks about their old days of being rookie trainees together.

Ji Na finds Seung Min and decides to talk to him about her problems as they had decided in their contract. Seung Min is surprised to see her as he thought she had to practice. Seung Min reassures Ji Na saying that she is a good person and that she did nothing wrong. She shouldn’t be too hard on herself regarding the incident with Han Na. Then, Ji Na comes down with worry because she walked out on their manager and must face the consequences. She recalls how debuting as an idol singer was her biggest dream in the last four years. Seung Min plays the recording of Ji Na singing in the park that he recorded last night to lighten the mood. The episode ends on a light note as Seung Min and Ji Na continue their light-hearted conversation well into the night.

Be My Boyfriend Episode 11 Recap

Be My Boyfriend episode 11 was aired on 1 April 2021. The 11th episode in the series starts with Ji Na meeting her older sister and boyfriend in a cafe. They want to meet her ‘famous’ boyfriend. Apparently, Seung Min is now famous for dating her. Ji Na tells them about her dating contract with Seung Min and how she has developed true feelings for him during their stint. She said that she wants to confess her feeling to him after the termination of the contract.

Meanwhile, their manager tells Han Na that the agency would return her money if she could get Ji Na back since she was the main one in the studio. The CEO doesn’t want to debut the group without Ji Na. The manager said that Han Na should talk to her as they are close to each other. However, Han Na denies persuading her by saying that she erased her number.

In the next scene, we see Ji Na and Seung Min studying together in a study room. Ji Na tells him that she uploaded the video he took of her singing in the park. This excited Seung Min, especially when he sees that the video already has 100,000 views. Ji Na thanks Seung Min for his help. Ji Na finds an opportunity to get closer to Seung Min when his pen falls on the floor. She holds his hand as they try to pick it up together. The next scene is funny as Seung Min tries to write with his left hand whilst holding Ji Na.

The next scene starts with Ba Ul and Min Ji flirting in the study room. Han Na is also present here. She gets disturbed because of their playful banter. Ba Ul and Min Ji then proceed to watch Hyun Tak’s interview after winning the baseball match. In his interview, Hyun Tak says a girl is always displeased with him, no matter how well he plays. He wants her to cheer for him. He evidently means Ji Na and talks about her openly on camera. Later, Seung Min meets Hyun Tak in the washroom and asks him about the interview. Hyun Tak openly challenges Seung Min in the washroom.

Back in the study room, Ba Ul’s phone runs out of battery. He looks into Seung Min’s bag for a spare battery and finds the dating contract. Han Na overhears Ba Ul talking to Min Ji about it. Later, their manager approaches Han Na to persuade Jin Na to come back after their CEO sees her Youtube video. Hyun Tak meets Han Na in the hallway and asks her about Ji Na to have Han Na burst out at him. Han Na wonders why everyone cares as much as they do for Ji Na. She wonders what she lacks compared to Ji Na not to get this much attention.

Han Na brings Seung Min to an empty classroom and confesses her feeling for him. She says that they can also start with a dating contract for the time being until Seung Min falls in love with her. When Seung Min admits to liking Ji Na, Han Na says that she has tried everything to be like her. Ji Na interrupts their conversation, saying that Seung Min is her boyfriend and Han Na should maintain distance. The next day, the entire school receives notifications on their phones with an article calling Ji Na out as a fraud.

What to Expect From Be My Boyfriend Episode 12?

You can expect a turf between Ji Na and Seung Min over the dating contract being leaked. After all, it was Seung Min’s copy that he lost. You can also expect a revelation as to who leaked the contract after all. Was it Ba Ul, since he was the one who found it in Seung Min’s bag. But, evidently, there is a higher chance of Hyun Tak or Han Na doing it because of Ji Na’s strong feelings and Seung Min, respectively. We hope you’re looking forward to the next episodes of Be My Boyfriend to find out what happens to all the friends and their twisted relationships.