Rakul began modeling at the age of 18 while still in college. 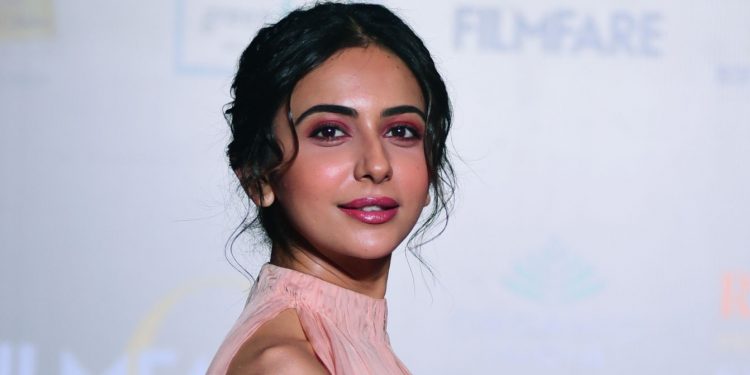 Rakul Preet Singh is one of the well-known Indian film actresses and models who is most known for her work in Telugu films. Rakul Preet Singh was welcomed to this world in New Delhi, India, on October 10, 1990. Singh was born into a Punjabi family and had attended Dhaula Kuan’s ‘Army Public School’ for her education. She earned her bachelor’s degree in mathematics from the University of Delhi’s ‘Jesus and Mary College.’ She has also been an active golfer who has competed on a national level. She has also starred in Tamil, Kannada, and Hindi films in addition to Telugu films. Rakul began her modeling career while still in college. Do you know who Rakul Preet’s Boyfriend is? We will discuss this in detail here.

Rakul Preet had made her acting debut in the Kannada film titled ‘Gilli’ in the year 2009. ‘Venkatadri Express,’ ‘Loukyam,’ ‘Kick 2,’ and ‘Dhruva’ are among her most well-known films. She competed in the ‘Femina Miss India’ pageant in the year 2011 and placed fifth. She’s also the winner of the ‘Miss India People’s Choice contest. With the film ‘Yaariyan,’ she made her Bollywood debut in the year 2014. Her performance in this film had received a lot of positive feedback from the audience. She has established herself as a prominent actress in the South Indian film industry in a short period of time. Rakul opened her own gym named ‘F45’ in Hyderabad in 2016. She has also purchased a new property in Hyderabad for Rs. 3 crores, where she resides along with her parents.

Rakul Preet is currently involved in a relationship with her boyfriend named Jackky Bhagnani. She took to Instagram in October 2021 to declare her romance officially with Bollywood actor Jackky Bhagnani. Rakul and Jackky posted a snapshot of themselves holding hands and captioned it with a heartfelt and meaningful message. Rakul and Jackky are reportedly going to Tie a knot in the year 2022, according to the latest rumors.

Singh, on the other hand, stated in an interview that she would inform her admirers when the wedding takes place. Currently, the two are focusing on their respective projects. Rakul Preet Singh recently wished her lover, Jackky Bhagnani, a happy birthday on Christmas. On Instagram, the Marjaavaan actress posted a photo of Jackky with a message. Also, Rakul was previously rumored to have been linked with the Tamil and Telugu film star Rana Daggubati. However, this was only a rumor.

Who Is Jackky Bhagnani & What Does He Do?

Jackky Bhagnani is an Indian Bollywood actor, film producer (Pooja Entertainment), and entrepreneur who was born on December 25, 1984. Jackky made his acting debut with Kal Kissne Dekha in the year 2009, then starred in the moderately popular F.A.L.T.U in 2011 and most recently in Mitron. Vashu Bhagnani (film producer) and Pooja Bhagnani were the names of Jackky Bhagnani’s parents. Deepshikha Bhagnani is his sister. He is descended from a Sindhi family.

When his father left Kolkata after a little quarrel with his family, Jackky Bhagnani was just two years old. They originally relocated to Delhi, which his mother disliked, before settling in Mumbai. Jackky Bhagnani attended St. Teresa’s High School in Mumbai and Welham Boys’ School in Mumbai for his education. He graduated from Mumbai’s H.R. College of Commerce and Economics with a degree in commerce. He’s also taken acting classes at the Lee Strasberg Theatre and the New York Film Institute.

Rakul Preet Singh has always dreamt of becoming an actress. She started her career as a model. Rakul began modeling at the age of 18 while still in college. In the year 2009, she made her acting debut in the Kannada film ‘Gilli.’ She had no idea how big the South Indian film business was when she signed the deal. The reason which made her sign the film was to earn a little additional pocket money. Both the public and the critics praised and admired her. She then went on to finish her studies and earn her degree. She competed in the ‘Femina Miss India’ pageant in the year 2011. At the pageant, she earned four subtitles. In 2011, she made a comeback with the film ‘Keratam,’ in which she starred alongside Siddharth Rajkumar.

Despite the fact that she had a limited role in the film, some critics praised her performance. Rakul made her Hindi film debut in the year 2014 with Divya Kumar’s directorial debut, ‘Yaariyan,’ where her performance was well-received. Rakul Preet Singh has been in high-profile Telugu films since 2015. In 2019, she starred in music videos for Neha Kakkar, Armaan Malik, Sunidhi Chauhan, and Shreya Ghoshal, among others. Rakul Preet Singh has launched two gyms in Hyderabad, one in Gachibowli and the other in Kokapet, under the ‘Functional 45’ franchise. In Visakhapatnam also she has opened a gym. Rakul is now essaying the role of a pilot alongside Ajay Devgn and Amitabh Bachchan in Devgn’s directorial debut, Runway 34. On April 29, 2022, the film is slated to be released.