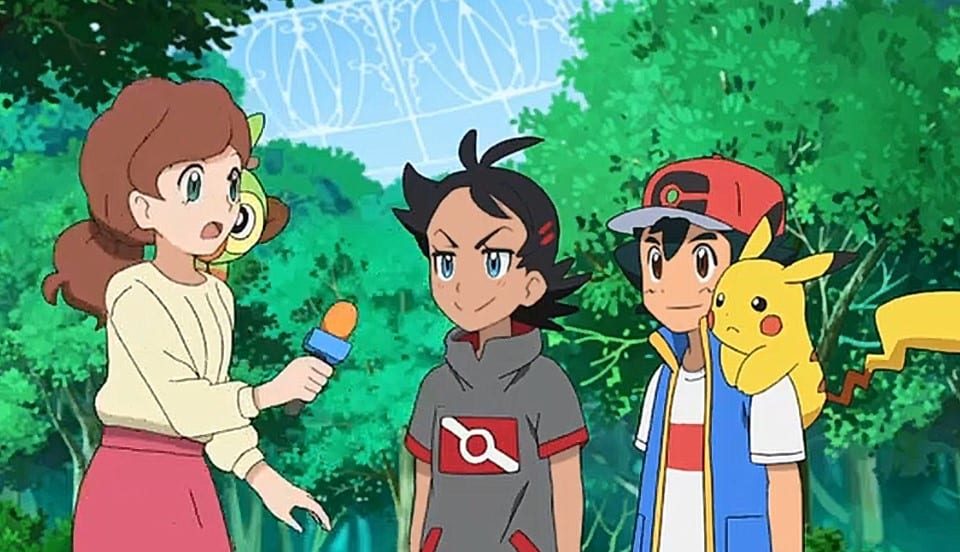 Satoshi is the boy aiming to battle that Supreme Monarch, Dande and Go, dreams to capture every Pokemon to work his way up to Mew. The two continue the adventures to become the Wolrd Pokemon Champion. Sakuragi and his daughter have hired a cameraman to take pictures of Satoshi and Goh. They are trying to find the best place that the picture will look good. They are also interviewing the news reporter. The news reports start with her interview and reveal that she is at Sakuragi Insitute in Kubachiba City.

The reporter said at this institute; they find a pair of research fellow or special lab assistants who are just ten years old. The two pairs are Goh and Satoshi, but Sarunori ruins the show. He jumps on the shower of the news reporter, and the cameraman falls when he is trying to stop them.  Sarunoru manages to calm down since he was excited to see the lady. They continue with their interview, and Goh, along with Satoshi, narrates the story of the adventures.

The news reporter thanks them for their time and wishes them the best in their future endeavors. She asks them to conclude by telling her their dreams. Satoshi reveals that his dream is to make it to the top in the Pokemon World Championship and bead the Supreme Champion, Mr. Dande. He also said that he would also become a Pokemon Master. Goh reveals that his dream is to catch every Pokemon and reach Mew. The lady wonders how he will catch so many Pokemons.

Goh shouts; everyone comes out, and the Sakuragi park got filled with the Pokemons. He reveals that catching Pokemon helps him understand them, and if he understands them, it will be easy for him to catch Mew. They finish their interview, and Messon evolves when they are sending the interviews off. Goh is surprised to hear that Jimeleon’s data will be added to the index. Goh wonders which Pokemon is Jimeleon, and Sakuragi comments that Jimeleon is the Pokemon that evolves from Messon.

They decided to head and see how Jimeleon looks like. Meanwhile, Jemeleon can’t believe his appearance when he looks inside the water. He expected to look like a cowboy Cameleon, but he looks like a lady with one hair covering his right eye. The Pokemons inside the ponds admire him. Satoshi and Goh arrive, but they couldn’t find Jiemeleon. They wonder where Jimeleon has gone, and Goha realizes that Jimeloen might be like Messon, who loves to hide. 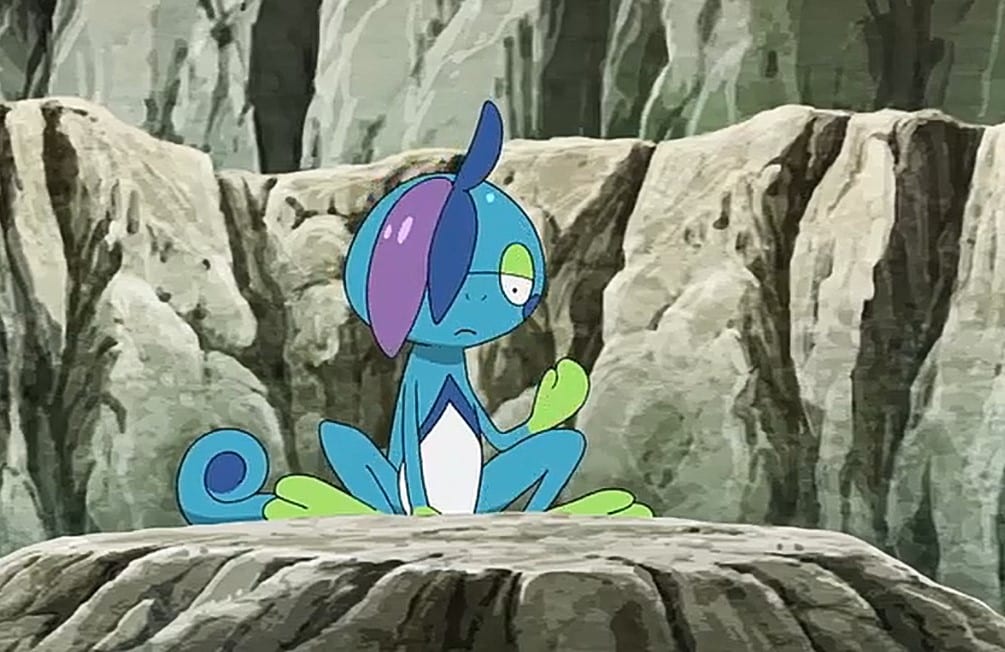 They started to look for Jimeleon ad Acerburn arrives at full speed.  Goh shows Aceburn the photo of Jimeleon and told him to look for him. Jimeleon got kicked from different caves by other Pokemon since they are afraid that he is too handsome and might take their wives. He bums with Aceburn, who heads to Goh and report that he was with Jimeleon.  Aceburn leads the way to Jimeleon, but when they arrive, Jimeleon was camouflaged with the forest.

Sarunoru enters that cave with Goh, and they find Jimeleon sleeping. Goh tries to convince Jimeleon to return with him. He notices that Jimeleon can shoot Water Gun from his hands. Jimeleon wants to stay hidden inside the cave. Sarunoru tried to cheer Jimeleon, but he was not interested. Goh told him that Satoshi and Koharu want for him to return. He realizes that Jimeleon wanted to look like Inteleon that he met with the other day. Goh told Jimeleon that if he works hard, he will evolve to Iteleon.

He asks Jimeleon to train with him and make that dream happen. Aceburn got annoyed and dragged Jimeleon out of the cave. When they are outside, Jimeleon runs away from the institute, and they search for him. Goh, wet out and find Jimelon and talk with him for the last time. In the morning, that finds that Jimeleon has returned.

Pokemon 2019 Episode 63 will release on Friday, 23 April 2021, at 6:55 PM JST. You can watch new episodes of Pokemon 2019 online on Netflix. Find out who will Satoshi and Goh face in their next battle on the preview below.