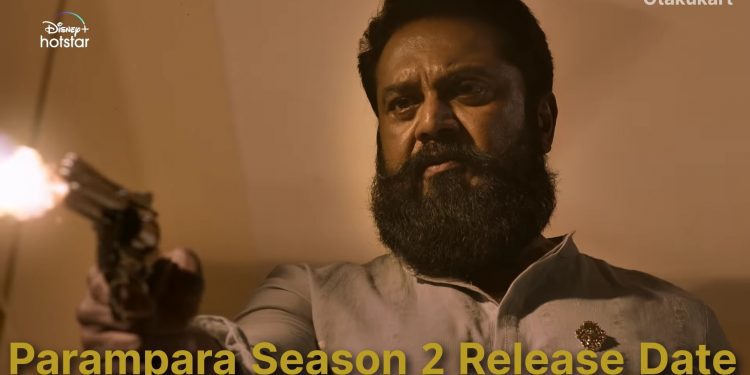 In recent times, the OTT giants have begun focusing more on regional content and are trying to produce original series and movies for the Indian audience. The Disney Plus Hotstar series, Parampara is also one among them. Instead of bringing a Hindi series, this is a Telugu crime drama series, showing that we will be seeing more regional Indian content. After the season one premiere of Parampara, fans had already begun to ask about Parampara Season 2 Release Date.

But for those who don’t know what this series is about or are hearing about this series for the first time, Parampara, which translates to “tradition,” is a series that tells us a David vs. Goliath story. In this, an underdog fights against a ruthless villain who is also his uncle; to fight for the honor of his father, who was wronged by the deeds of the villain and has the integration of politics and many other social aspects. The series has a huge cast and is one of India’s popular series in recent times. In this article, we will be looking in detail at the upcoming season of Parampara season 2, including its release date, cast, and storyline.

Parampara Season 1 Recap: What has happened so far?

The story of Paramapara tells us the rivalry between Gopi and Naidu, where he fought for his father Mohan Roa, as Naidu had taken everything that was theirs. The series tells us a David vs. Goliath story where Gopi has to fight against his ruthless uncle. But to the world, the Naidu family is a strong family with a strong bond between Mohan and Naidu.

As sparks were getting strong inside the Naiduu family, Gopi and his father decided to unmask Naidu and show his true face to the public. But it is not easy as the father and son had determined to be. They have to fight against the power of Naidu if they want to shine a light on Naidu’s true identity to the public.

Will there be Parampara Season 2?

As of now the there hasn’t been any confirmation regarding Parampara Season 2 as this series had just been released. But considering its reach and appreciation, we may soon hear confirmations regarding the season 2 Parampara.

Also Read: The Family Man Season 2: Everything That You Need To Know

Season one of Parampara was released just before Christmas on December 24. Even after that, the series has been widely appreciated for its production quality and the star cast. By the end of the first season, the storyline has also taken a pretty good turn. All this is making the fans of the show demand a season 2. While it hasn’t been officially confirmed, there are already many reports that the streaming giant Disney Plus Hotstar has already given the green light for the project.

Reports also say that we may soon hear an official confirmation followed by an official release date and time for Parampara season 2. If the words spreading are taken into account, it is said that the Naidu family will return to the mini-screens by the end of 2022, with all the episodes of the Second season releasing on day one itself. As for the number of episodes in Parampaara Season 2, we are still left with guesses. But considering the first season has a total of 7 episodes, we are expecting the same or more episodes for season 2 of this Telugu crime drama.

Just like the first season, the Parampara season 2 will be available exclusively to Disney Plus Hotstar and is expected to be available in its original language, Telugu and Hindi. We are also expecting a dub version for Tamil and other Indian languages.

Parampara, even before its release, was already in the mouths of people, thanks to the star cast it has. While we don’t have any official confirmation on who will be returning for the second season of the series, let us still take a look at the cast of Parampara.

The crime political drama series Parampara casts Jagapathi Babu as Mohan Rao and Sritej as his younger self. Sarath Kumar as Chintalapudi Nagendra Naidu, and Prawin Yendamuri as his young self. The show also stars Naveen Chandra as Gopi, Aakanksha Singh as Rachana, Ishaan as Suresh, Aamani as Bhanumati, Naina Ganguly as Jenny, and Kasthuri as Indira.