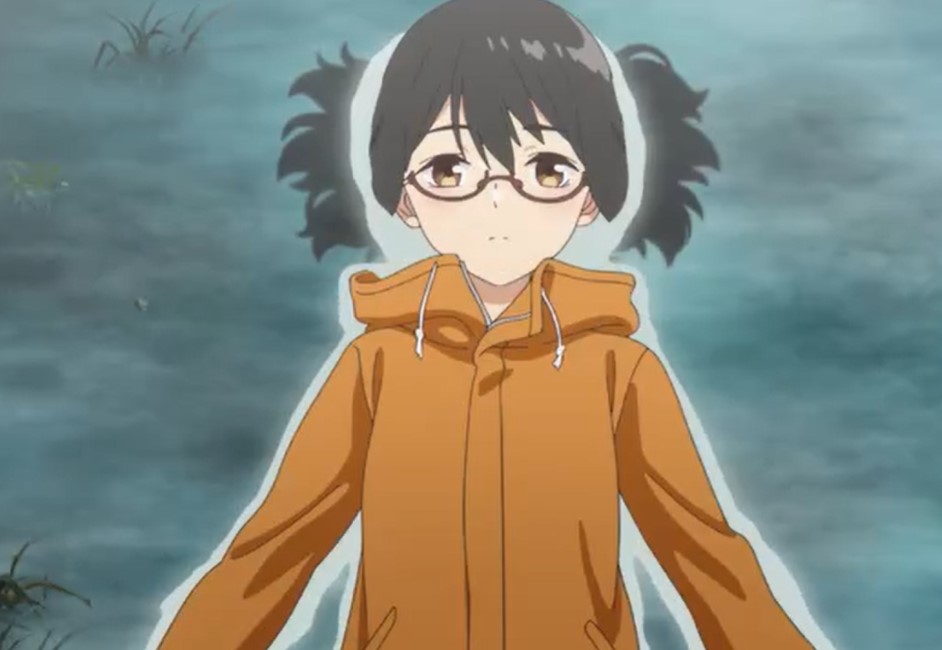 Sarao was floating in the pond wondering if she should die since she can’t afford to pay her loan. She thinks that only the administrator will care and student service since she has no friends in her life. While she is still wondering a tall girl shows up asking if she needs to be saved. All of sudden she got swallowed by a pond and that tall girl dives in and saves her. A tall girl is revealed to be Nishina she thought she was saving Satsuki.

Sorao told her not to look at the other side of the pond. Nishina did and she started to feel sick. Nishina got better and ask Sorao what happens if she keeps on looking at that thing. Sarao tries to do so and witness something she has ever seen in her life. While Sorao possed by the power of that thing Nishina saves her again by throwing something that makes that thing vanish. Nishina is amazed that she hit it with a chunk of rock salt.

Otherside Picnic Episode 2 will be released on Monday, 11 January 2021, at 11:30 PM JST. You can officially watch this anime on AnimeLab and Funimation or visit its official website at othersidepicnic.com. Let’s take a look at the latest updates below.

Nishina reveals that she was told it works on things just like that and Sorao thanks Nishina for saving her. The two started to get to know each other better and Nishima reveals that she is just lost. She heads to the direction where she throws that chunk of rock salt to retrieve it back. Later the two started running while panic it seems as if they were chased by a dangerous thing. They manage to reach the old ruins and hide inside.

Inside the ruins, Soroa asks Nishina how many times has been to that world. Nishina reveals that she has been there ten times and Sarao thinks that it is too much. Soroa realizes that it means Nishina is an expert and she fought off that wiggle-waggle. Nishina asks if the white thing is what Sarao is calling it wiggle-waggle and Sarao replies that it is what she heard. Nishina said that it means Soroa is the one who is an expert now.

Sarao reveals that she just read about it and never thought that it was real. Sarao said that ”the wiggle-waggle urban legend dates back to around 2003, mostly on the net.” It looks like a white shadow the wiggles and dances about. It has been revealed that those who see it go mad. Nishina shows Sarao that chunk of rock salt asking her what is it. Sarao has no clue and she started to worry if she has to bring that thing from the other side.

Soroa explains why that world is called the other side and she reveals that Nishina is the first person she has met from the other side. Suddenly they started to hear a door banging from the outside. They started to wonder what is happening. Sarao tries to look using the hole at the door but she started to ask herself what is it that she is seeing. Sorao reveals that it is nothing and it is just blue, Nishina unleashes her pistol telling Sorao to step back.

Nishina tells Sorao to relax it is just a Makarov. Nishina tries to look outside and saw something different which makes her open the door. When they open the door they find that they are in the middle of the town and everything has changed. Nishina is relieved that they are out of danger since she was beginning to worry that they have to be in combat. Sarao is still shocked and Nishina tells her not to worry since she is here.

Sora asks what about that blue thing that made her draw her psitol. Nishi replies that she has heard of it and the world is full of dangers. But the most dangerous is when everything turns blue and Soroa asks if something even scarier is gonna attack them. Nishina replies that she has no clue since she is new to this. After a week at Saitama, University Sarao runs into Nishina again and they share their numbers and email address.

Nishina asks Sorao if she still wants to go to the other side. Sorao asks why can’t she go by herself and Nishina keeps on begging her to go. An unknown girl who was nearby heard them talking about it and the two started to do their work together. Later Nishina shows Sarao a pack of a chunk of rock salt. She tells her that if they go there they will make a lot of money and Sarao is worried that she nearly died last time.

Nishina tries to convince Sorao who asks what happened to Ophelia. Nishina realizes that she will die if she goes alone and after a heart-touching conservation Sarao agrees. They both board on a train heading to the other side. When they reach there they encounter a group of wiggle-waggle and clash with them.

Sorao wanted to flee and Nishhina reminds her why they are here while attacking the wiggle-waggle with salt. The salt didn’t work and she draws out her pistol firing multiple bullets. She reveals that pistols don’t work either wondering if they are finished. Soroa realizes that to hunt the monsters from the other side they have to follow the rule. They started following the rule and defeat their enemies.

That’s how we conclude this week’s post by all of the above updates, see you next time when a new episode is released.