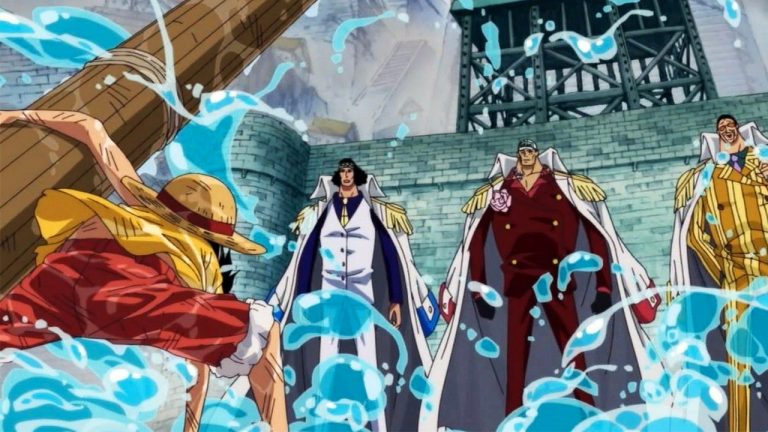 This is a theory article that discusses the implications of Akainu vs Luffy happening again at the 1100 Chapter of One Piece Manga. It’s not like it will be this exact manga chapter but can such a fight happen after the number passes 1100? Akainu (Sakazuki) is the current fleet admiral of Marines that are the biggest organization against Pirates. Luffy is aiming for the title of Pirate King which means his crew has to face the full force of Marines at some point.

Last time, Luffy met Akainu in the Marineford arc. Akainu has a strong sense of Justice and shows no mercy to the pirates. After Luffy rescued Ace from the Marines back then, Akainu targetted Luffy all of a sudden. When Akainu was about to pull a finishing blow on Luffy, Ace sacrificed himself to save Luffy. This encounter Akainu sparked the urge to get stronger in Luffy. He wants to get strong enough so that no one else is killed like this again.

Luffy vs Akainu can Happen?

It could happen if Marines decide to hunt down Straw hats. Luffy is not the type who keeps grudges against people. Luffy continued his journey to obtain One Piece after his long training. There was no effort to get revenge for Ace’s Death from Akainu or Marines. The only way, Luffy vs Akainu could happen is if Akainu himself decides to come and hunt down straw hats for some reason. That is not happening before Chapter 1100 of course.

So, what will be the result of this fight? Thing is Luffy has improved himself a lot over his two years of training. If he knew Haki at the time of the Marineford incident, the fight would not have ended in Akainu’s favor. Luffy may not be at the level of Akainu at this stage but if he takes down an emperor after getting more powerful, Akainu will get himself kicked hard if he decides to show up.