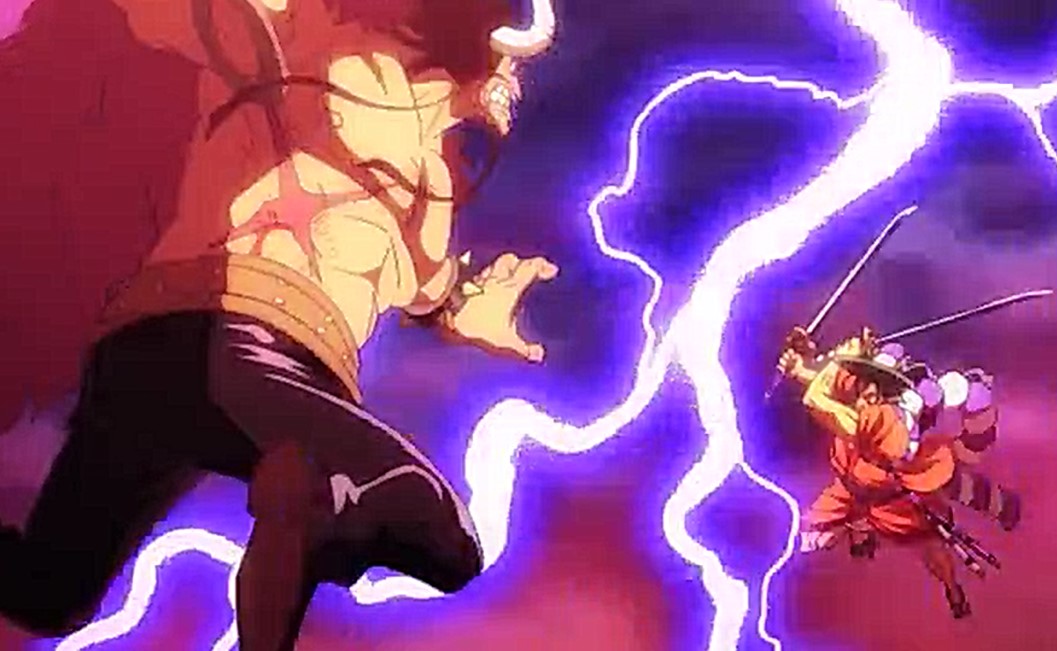 The Akazaya Nine set out to face Kaido and Orochi; Oden finds that the promise they made five years ago was a lie. Kaido told Oden that day they had no chance to defeat the Samurai, and now they spent five years gathering underlings to face the Samurai. He also told Oden that he was a fool to believe Orochi’s words, and he made him dance naked every week. One Piece has entered a great war between the Akzaya Nine (The Nine Red Scabbards) and The Beasts Pirates.

Kaido’s underlings laugh at Oden that a stupid idiot like Orochi fooled him. The episode will be looking at is titled The End of Battle Oden vs. Kaido. Oden told Kaido that he made a choice five years ago, but now they can talk about the future. He unleashed his two Katana and wiped out half of Kaido’s underlings with a single blow. Kaido’s underlying wanted to retreat by they realize that it ‘do or die.’ One a huge explosion. One of the underlings comments that Samurai is too strong. The hot-headed one replies that they are outnumbered.

Previously on One Piece Episode 972

Kine’mon tells the rest of Akazaya Nine to follow Oden as they pulverize and slash the enemies. Oden was about to be shot by pirate hiding in the forest by the pirate who got slashes by a lady. That lady appears on top of the tree, and Oden asks who she is. The lady replies that she is the one from Sukiyaki’s group. Oden realizes that that lady is a Shinobu from Ninja Legion. He asks what happened to the rest of the Ninjas, and she reveals that Kozuki’s Ninja Legion was sold out to Orochi by Fukurokuji.

Oden comments that those who can’t trust their silly lord can’t be blamed. The lady told Oden that her dream was to serve Oden one day. Raizo arrives to back up the two as they head towards the enemies. The lady reveals that She is still Kozuki’s Ninja. Raizo calls that lady Shinobu. He told Shinobu that they still have a long journey ahead of them. Oden unleased a two-sword style and begins to eliminate the pirates. Meanwhile, Otoki is at home taking care of Hoyori and Momonosuke. 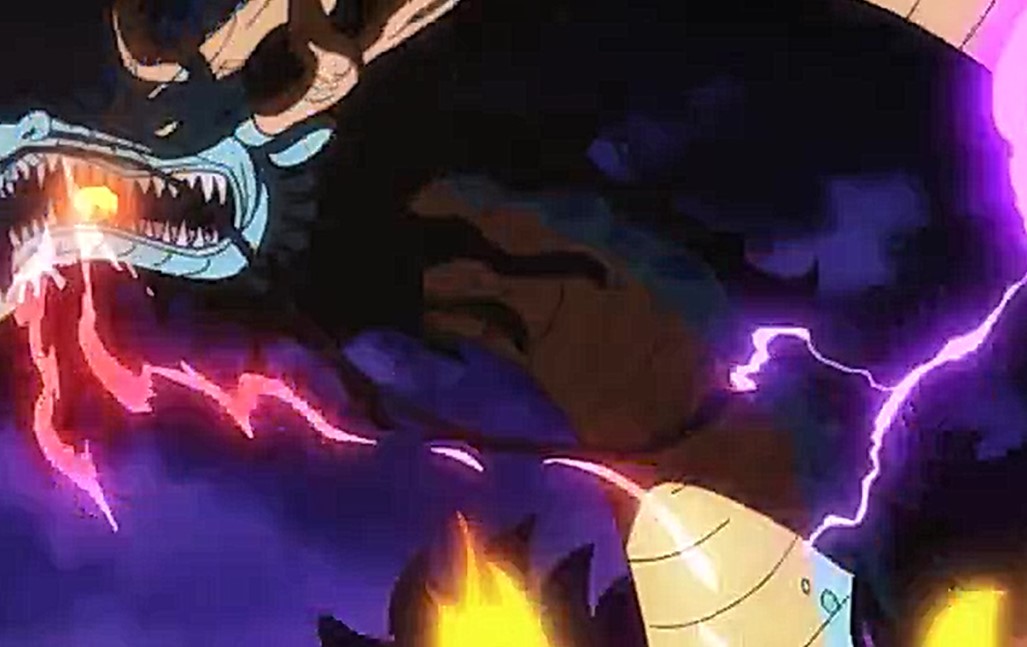 She is knitting something thinking about the war. But Yasuie and other Samurai are there to protect her. Yasuie realizes that Orochi might send some pirates to kill Oden’s family. Otoki recalls when Yasuie reveals that Oden has sent the latter to him, and it says, ”My wife and children will be targeted. Please save them.” That day Yasuie realizes that Momonosuke is already eight. He told Otoki to be repaired if Oden loses and this country is finished. Otoki finished knitting Oden’s dress, and she embraces the dress with tears that Oden might lose.

Back at the battlefield, the pirates report to Kaido that the first unit has been wiped out. Kaido got furious roaring Orrorrroor with a huge ball of the flame inside his mouth. They comment that Kozoki Oden is stronger than they imagine. Queen comments that it is pathetic; why does it take so much time to finish 11 Samurai. He wonders why a thousand troops are failing to get the job done. Kaido decided that he will go and get the job done. He inhales a huge blast of wind and exhales a huge powerful attack called Blast Breath.

Oden manages to counter Blast Breath and cut it with a two-sword style. Queen and King were stunned about Samurai’s doings. Oden asks Oden why he is not giving up since he mighty loose to a thousand troops. He told him if he wants to fight, he can come to him. Oden comments, ”here I come,” and Queen told the pirates to block Oden. 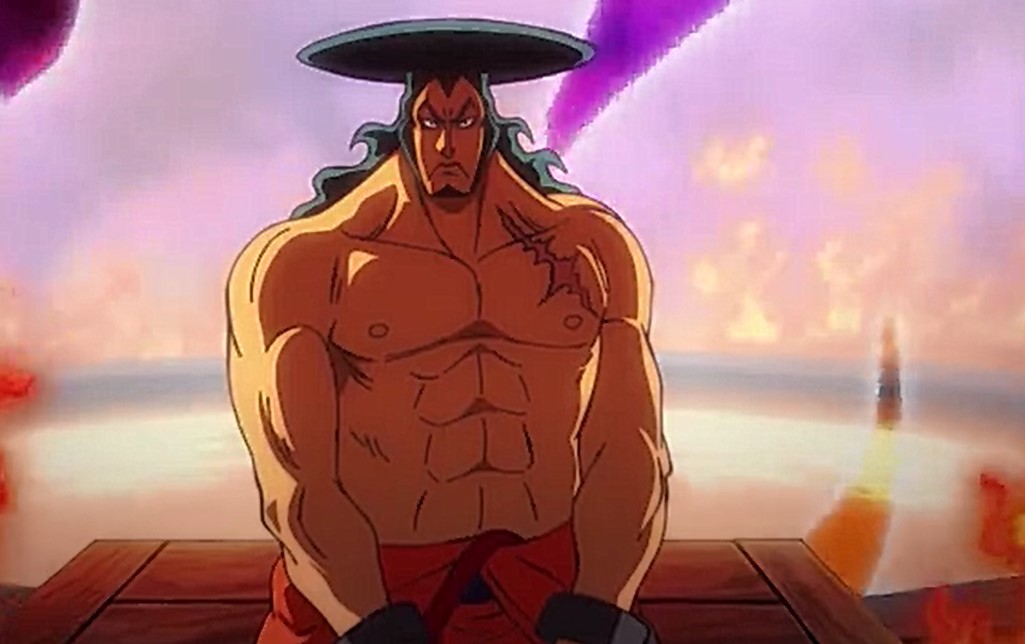 Oden unleashes Oden Two-Sword Styl: Paradise Totsuka that cut Kaido who said ”What.” The attack left Kaido with a server injury, and he realizes that no one has ever made him scream and feel pain like Oden. Kaido transforms back to his normal form and uses Momonosuke as bait. He hits Oden with his bat, and Oden though he was saving Momo.

But when he collapses, he realizes that it is the old geezer from that day using the Clone-Clone technique to act like Momo. That day Kuzuki Oden and the Akazaya members’ legendary battle come to an end. The intense battle between the Akazaya Samurai and the Animal Kingdom Pirates st a forest in Udon ablaze. Otsuki, Momonosuke, and Hiyori waited for Oden to come home.

But Oden is not showing up, and they wonder what has happened. Meanwhile, Oden and his crew got arrested, and he saves Shinobu by saying that she is not in his crew since she came to kill him. Shinobu was allowed to go, and she realizes that Oden did that on purpose. Later Oden’s execution begins, and Oden told Kaido to give him a chance. He said if one of them survives inside the pot of lava, he must set them free.