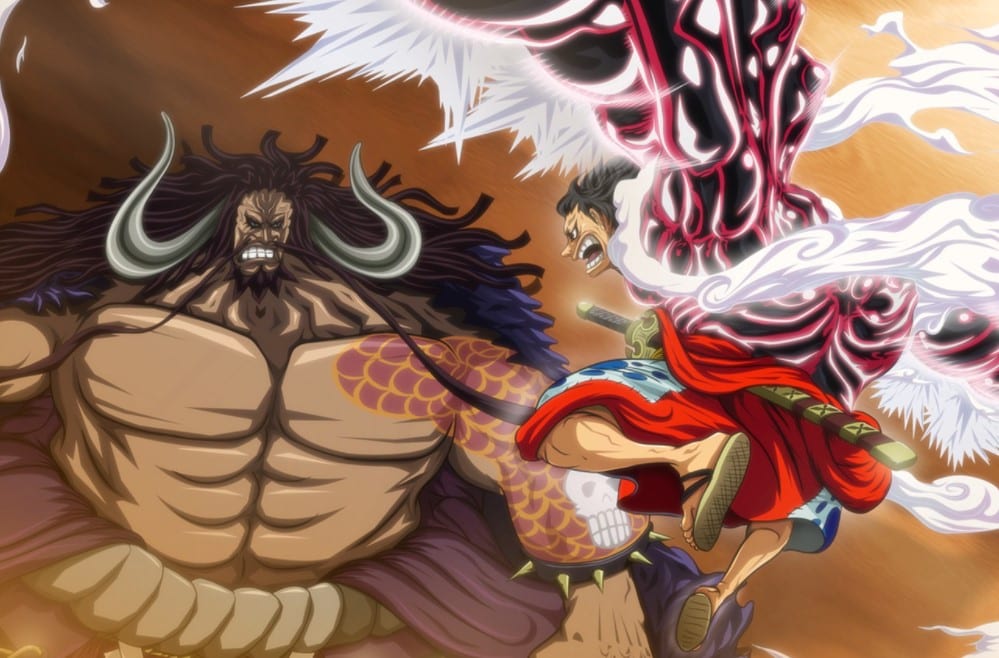 One Piece is back from the weekly break, but the Manga will be taking another weekly break as usual next week. Don’t forget to take a look at the weekly schedule at the end of the post. Let’s dive into the main topic. The upcoming chapter is titled Anarchy In The BM, meaning Anarchy In The Big Mom. The chapter starts with Sanji on the cover holding a knife in his left hand and ready to clash with a Shark that resembles Zoro’s appearance. The Shark is holding three Katana wearing a Haramaki.

But the real Zoro is napping on the sofa, and Shark is inside the Thousand Sunny’s tank. Meanwhile, Ussop realizes that they can’t beat Ulti and Big Mom. He told Nami, who refuses to escape since she wants Ulti to pay and can’t forgive Ulti. Utli managed to recover from the earlier Thunderbolt she received from Nami. Nami unleashes a Tornado Tempo, and Ulti dodged the attack while grabbing Nami. Ulti tried to headbutt Nami, who is refusing to be crashed.

Big Mom summons Hera, Prometheus, and Napoleon and fires a Maser Cannon: Roaring Light Gun. Ulti got attacked with a powerful beam that pierces through her stomach. Ulti falls to the ground while her eyes turn white. Hera is revealed to be a thundercloud but different from Zeus. Napoleon and Prometheus are very excited that they are different from Zeus. Prometheus realizes that he is the one who doesn’t have a girlfriend and asks Big Mom to get him one. 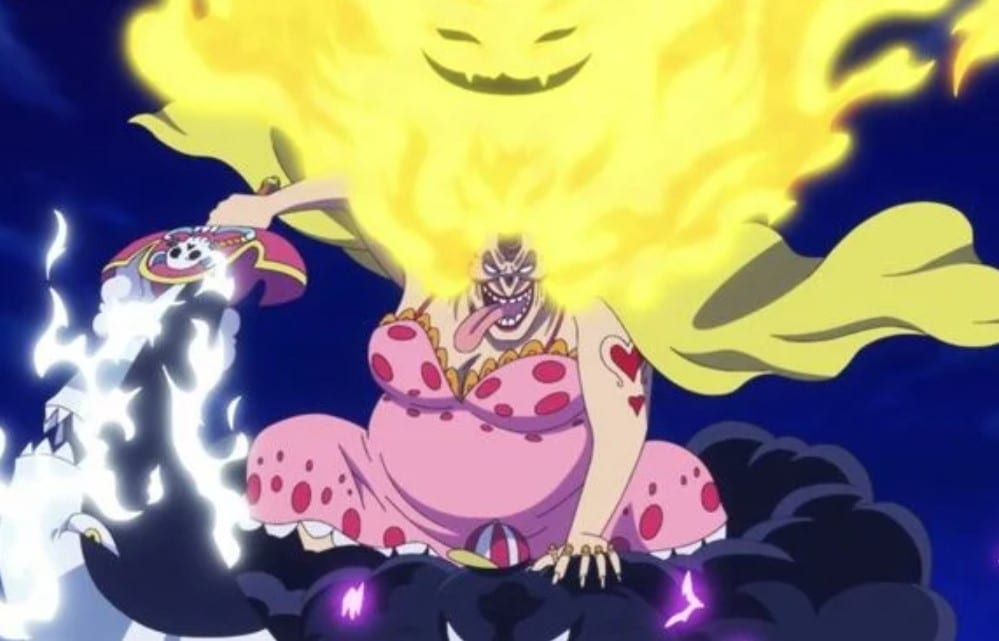 But Hera is not interested in Prometheus or Napoleon, and she fo0llow Big Mom orders. Nami spots Zeus and refuses to look at that side since she is still angry. Big Mom also noticed and welcomed Zeus, commenting that she could see new Homies joining the group. Big Mom told Zeus that his service is no longer needed and orders Hera to swallow Zeus and become stronger. Hera chews Zeus and starts swallowing him. Prometheus and Napoleon reveal that Zeus is weak and slow, and he almost got Big Mom killed.

They realize that Zeus let Big Mom down when she was falling. They comment that Zeus keeps on slowing them down and he is no longer needed. Big Mom grabs Tama away from Ussop, and she told Tama that the Straw Hats are Bad Pirates and don’t deserve to be with her. Zeus shed tears while apologizing to Nami and said the only kind person is Nami. But he is a coward, and he disobeys Big Mom’s orders. He told Nami that even though he doesn’t forgive him, it is fine.

Nami told Zeus that she understands, but he must watch her as she goes against Big Mom. Zeus transforms into a black thundercloud and smashes Big Mom. But Big Mom grabs Zeus and squeezes him with her bare hand. She started drawing his soul away from him. Nami notices that Zeus is in danger and feels pity for him, and she attacks with black thunderbolt balls. She told Zeus to swallow them, and he will be free from Big Mom. Unfortunately, Zeus is too weak to reach the black balls. 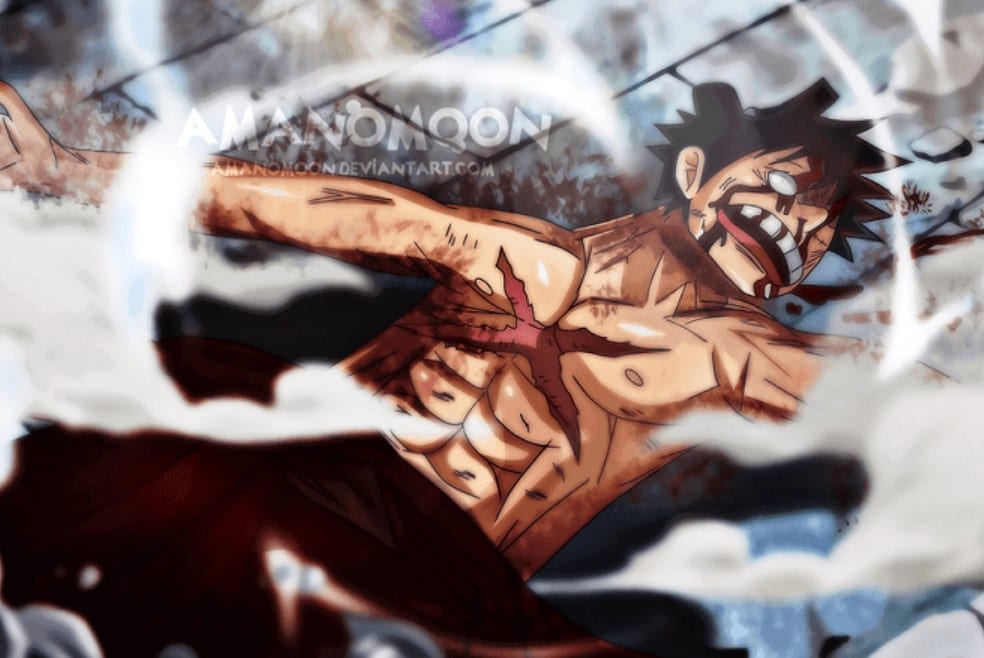 Hera eats all the black balls along with Zeus, and she got more powers. Tama advices Nami and Usop to escape from Big Mom. Big Mom got furious after hearing what Tama said. She realizes that Tama wants to runways with the Straw Hats. Big Mom looks at Tama and asks why she is running away from her. She decided that to kill Tama along with the Straw Hats. Bim Mom summons Napoleon to attack  Nami, Usopp, and Tama. But before she attacks, Captain Kid appears while blocking Napoleon.

He unleashes a huge metal and smashes Big Mom’s head with the ground. Captain Kid told the Straw Hats to leave Big Mom to him. He told them to leave the scene, and Big Mom is his prey. Kaido’s men comment that it’s Captain Kid. Meanwhile, at Onigashima’s rooftop, Kaido has transformed into his human form. He is exhausted and panting, but he is standing alone.

Kaido comments that he knew that it was going to end like this. He laughed at Luffy and said Luffy is a brat who possesses a powerful weapon, but he decided to fight alone. He comments that he should have beheaded Luffy, and everyone would have been convinced that a brat can’t beat him. Luffy falls from the top with heavy injuries, and he is unconscious.

One Piece Chapter 1014 Release Date and Where To Read Online?