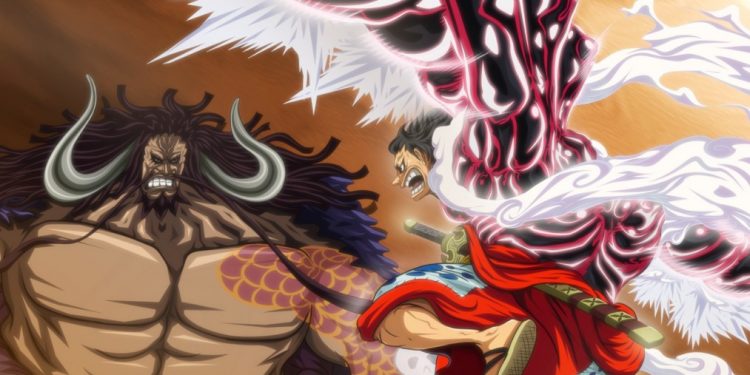 One Piece 1037 Spoilers reveals Kaidou vs. Luffy that has recently returned to the picture. The brawl between the two is on another level after Luffy smashes Kaidou’s face with a huge punch. But Kaidou also smashes Luffy with his Kanabo. One Piece is yet to conclude the mysteries within the Onigashima Castle since the CP0 has recently joined the battle. In the latest chapter of One Piece, we saw Zoro vs. King that ends with Zoro taking King down. Number 6: Rokki also joined the battle and appeared on Yamato and Fuga’s side. However, Yamato realizes that Fuga can handle Rokki and orders Fuga to take on Rokki.

On the other side, we saw Usopp doing his best to save Kiku and Kinemon, but the enemies arrive in number leading him to have an intense battle. But Izou came to rescue and helped Usopp. Izou knows that Kiku and Kinemon have to leave and allow Ussop to leave the scene. Cut to Raizou vs. Fukurokuju, they immobilized themselves with their attacks and got trapped. CP0 vs. Numbers Zanki and X Drake ends with the CP0’s victory. But Number Inbi and Apoo fled the scene.

The CP0 knows what will happen if the circumstance changes and if the Pirates of the New Generation conquer the Yonkou, which changes the direction the world is taking. Kaidou vs. Luffy recently continued at an intense speed where they both KO’D each other. The battle has become exciting since it is 1v1, and they get up after serving those knockouts. The first battle between Luffy and Kaidou was warm-up, and now they have decided to go all-out. They agree that they entertain each other, exchanging massive strikes. Sanji, Queen, Zoro, and King have settled their scores.

The title is “Shuron Hakke” which means “Eight Trigrams Dragon Sake.” It is a version of Kaidou’s Raimei Hakke: “Eight Trigrams Thunder.” Summary all thanks to Redon from AP forums. The festival at the Flower Capital is about to end while Luffy vs. Kaidou part two continues. The battle begins with Luffy and Kaidou exchanging massive strikes.

– Kaidou drinks alcohol while he continues to fight; the “Shuron Hakke” is revealed to be a drunken Kaidou technique.​

-Luffy is sad and angry.​

– Cut to the “Castle of Pangea” in “Mary Geoise, the “Gorousei” gathers and suggests catching Nico Robin.​ The  Government warships are about to reach Wanokuni.​ The Gorousei receive a message from someone in the fleet about the recent shadow.

– The “Gorousei” believes that it is impossible since it is a “Legend” and has never been awakened for the last centuries.​

– The “Gorousei” talking about a “Devil Fruit” and that they have changed the name of that Devil Fruit; it keeps the real name a secret. The chapter ends with that mysterious “Shadow” revealing its true identity, and the government ships also saw that.

Luffy vs. Kaidou continued after Kaidou beat Luffy in the first battle and sent him to the ground. Kadou thought that the war was over since he defeated the brat. But a strange incident which is yet to be explained happened, and Luffy recovered after that defeat. Luffy faced Kaidou for the second time with the help of his team, and it became three captains vs. Kaidou. But they got separated, and Kadou faced Luffy in part 2. Luffy has promised that he will never lose since he has found ways to beat Kaidou.

Kaidou’s strength has been deteriorating ever since the Onigahsima incidents, and Luffy has a chance to defeat Kaidou as the battle continues. Kaidou has also lost his Lead Performers. The battle on both sides, Onigashima continues, and Fugga and Rokki trade punches. The Samurai also pushed Kaidou’s subordinates while the CP0s had other plans. This has become interesting for the Samurai and the Straw Hats since they have gained the upper hand. Luffy vs. Kaidou continues after that game. Let’s meet when One Piece 1038 Spoilers are released.