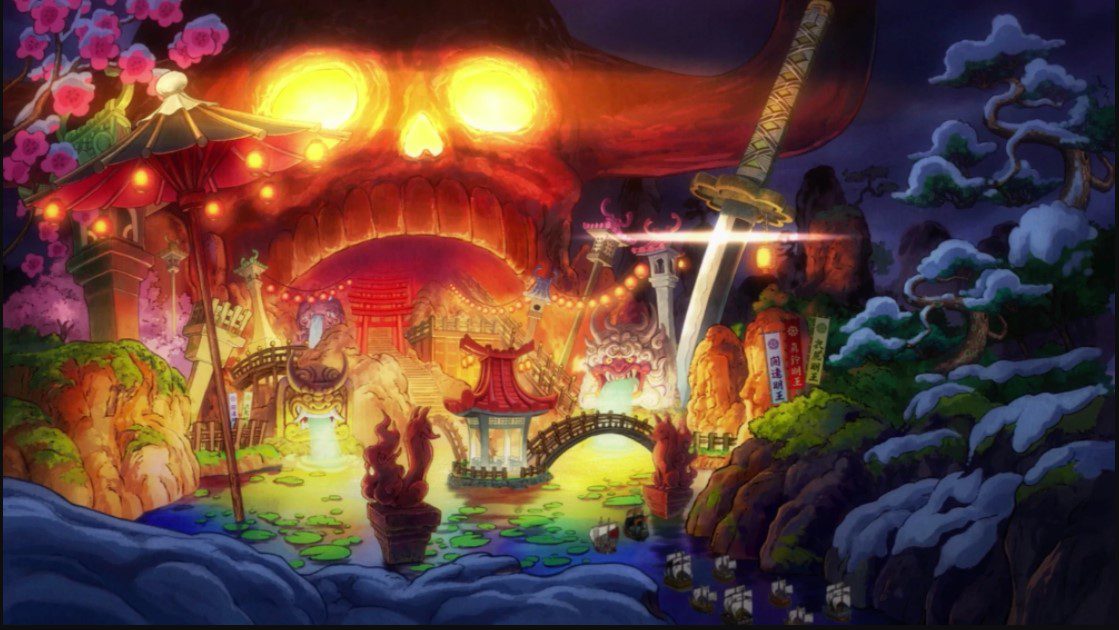 One Piece 1024 spoilers will be coming a bit later than usual for this week. With the manga returning to its usual schedule with no apparent break, it won’t take long till we get to see how the full chapter scans and spoilers will be with the weekend fast approaching.  The August chapter schedule only experienced one break and was filled with lots of content. With One Piece Chapter 1023 being as detailed as possible, we got updates from all the battlefronts in the Onigashima raid.

In the end, we managed to see Luffy and Momonosuke on their way to confront Kaidou. The recent chapters had put much emphasis on Zoro and Sanji’s against King and Queen. But based on the way that the previous chapter ended. It looks like we will be heading to the battle on the rooftop once again. As this fight will determine the course of Wano’s raid, every detail about what happens on the rooftop will be crucial. Because the fall of Kadou will mark the end of his era in Wano, at this point, things have been going towards the Samurai’s side.

But we should also note that this is because they have been dealing with the weaker sides from Kaidou’s men. Now with all of the Tobiroppo defeated, only the top echelons remain from Kaidou’s side, with only the likes of Hawkins remaining from the headliners.

This means that we should expect an intense development for September chapters as we head straight into Kaidou and Yamato’s fight. Things might develop a bit slow because we still have to catch up on what happened before Luffy got defeated. Then we should also expect to see more of Kaidou’s backstory, which might take some time from the manga’s schedule. For now, let’s look at One Piece Chapter 1024 spoilers. 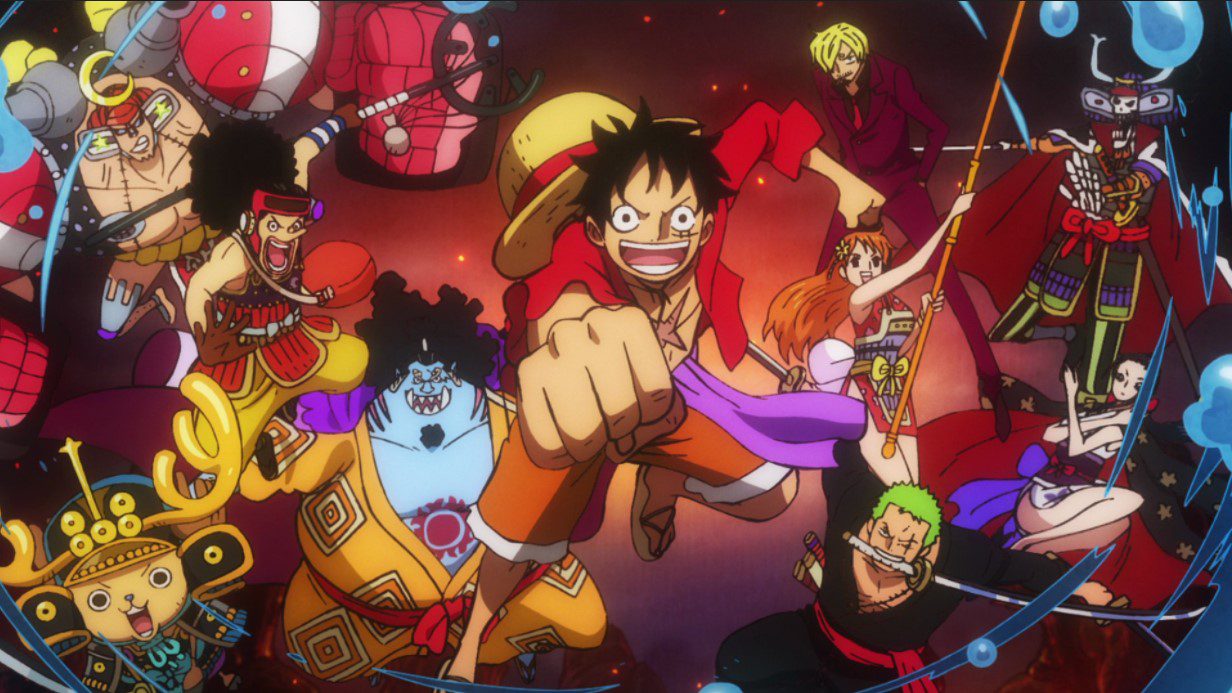 We have the full spoilers thanks to Redon from Arlong Park forums courtesy of One Piece Subreddit.

The Chapter starts on the 2nd floor of the Onigashima castle. A silhouette of someone appears at the back of the room while most of Kaidou’s subordinates fall down with foams on their mouth. Some of them try to look around to see who could be using the Color of the supreme king Haki against them.

The person behind the silhouette tells them that if they come before him with half-hearted resolve, they will not be able to keep their consciousness. They identified themselves as Usohachi, one of the two Flying Six hunters.

Kaidou’s subordinates are shocked to find out that there are two of them. The person behind the silhouette turned out to be Usopp, who was riding a giant crocodile gifter who has a full crocodile appearing out of his head. Usopp can hardly walk.

Nami contacts Franky with a  Den Den Mushi. Franky turned out to be in a Zone that leads to the Live Floor. He is still not sure what is going on as Kaidou’s men move towards the Live Floor. Franky fights them alongside Law’s crew to stop them from going downstairs.

On the 3rd floor of Onigashima castle. Black Maria and Robin’s battlefield is on fire. Some minks watch from a distance as brook crosses a bridge with Robi in his arms. They both appear to be fine, but Robin is still unconscious after her battle.

Brook contacts Jinbe, who was on the 4th floor of the castle. His battle with Kaidou’s subordinates continues as he wonders what could be keeping Kaidou from returning to the castle.

On one of the big entrances to the live floor, some of Kaidou’s subordinates try to enter the live floor as they escape from the flames on the other side of the castle while Kawamatsu and the Yakuza stop them. 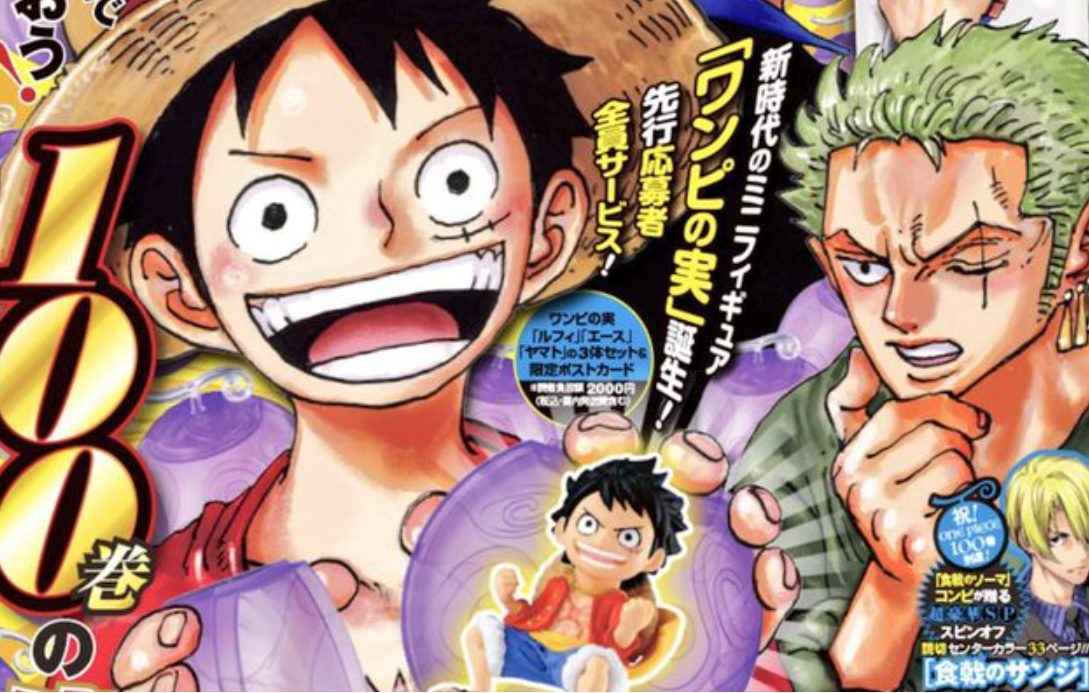 The Fight on The Rooftop

On the Onigashima rooftop, Kaidou and Yamato are still fighting. Yamato uses her attack “Narikabura arrow” against Kaidou, but he repels with his Kanabo. Kaidou jumps and attacks her with a stronger version of the same attack. Yamato managed to block the attack, but it proved to be too strong for her and send her crashing on some rocks.

She recovers and starts talking to Kaidou. She asked why he always tries to kill her. Kaidou tells her that this is no longer a family quarrel. Since Yamato declares himself as Oden, Kaido sees this as a declaration of war against him.

Then we see Yamato’s flashback with Kaidou and a young Yamato near the giant Torii at Onigashima’s entrance. Taking a look at the injuries that Kaidou still had at this time. It looks like this took place after Oden’s death 20 years ago. Kaidou still has the freshly bandaged injuries from Oden’s attack.

Yamato is chained to a wooden column as she kept calling herself Oden. She is badly injured and hasn’t eaten for a long time. Her appearance is the same as the present day, but she was a child at that time. We also see several of Kadou’s subordinates present as they collapse from Yamato’s color of supreme king haki. Some of them call her the Ogre princess.

Kaidou comments that Yamato has potential due to her supreme color of king Haki. But if she keeps calling herself Oden, then Kaido has no choice but to let her die. Kaidou then takes Yamato to a cave with a giant rock as a door. She is then chained to a giant rock alongside 3 other greatest swordsmen from Wano that Kaidou has captured.

Kaidou tells them that if any of them surrenders, he will let them join his crew. As he says this, he leaves several swords on the ground and a portion of food next to them. This way, they will have to kill each other as the food is not enough for all of them. Yamato tries to persuade Kaidou to release her. But he refuses since she calls herself Oden.

Yamato then thinks that the samurai is going to kill her to avenge Oden. But instead, they treated her nicely and offered her the food. One of the Samurai drew his sword and cut Yamato’s shackles, and she asked his name. The samurai told her that a defeated samurai has no name; she could just call him Nanigashi (meaning a certain someone).

We see that the Samurai appears a bit identical to Zoro but older and wears a bandage on his left eye. His name is not revealed in this chapter, but he appears to be Shimotsuki Ushimaru, the daimyo of Ringo.

Yamato then shows them Odenn’s journal and asks them to teach her how to read. They sympathized with her situation and wanted to create a way for her to survive until the war that Oden predicted that would take place 20 years in the future. They destroy the rock blocking the entrance as they go out to fight Kaidou.

Back in the present, Yamato and Kaidou fight on the rooftop. Yamato asks Kaisou why he has taken away hers the Wano’s freedom. But Kaidou tells her that this world can not be explained by simple questions and answers.

They then clash with their Kannabo using Thunder Bagua attack using their color of Supreme King Haki creating a huge explosion with lightning bolts. For the first time, Yamato has managed to match Kaidou’s attacks, and they appear to be evenly matched.

With One Piece Chapter 1024 set to release this weekend, things are promising a lot of action for September chapters. The end of the upcoming chapter highlight how things are going on the rooftop as Luffy and Momonosuke are on their way. At this point, Yamato appears to be evenly matched against Kaidou, but this will probably not run for long.

Earlier on, she admitted that she could not defeat Kaidou, so she will only keep him occupied until Luffy returns. Wit the chapter expected to summarize each battlefront and then conclude by showing us the situation on the rooftop, then we expect One Piece Chapter 1025 to focus more on Kaidou’s fight.