While Young Eun had her walls up making a distance from Jae Kook, He was doing all he could to stay close to her. 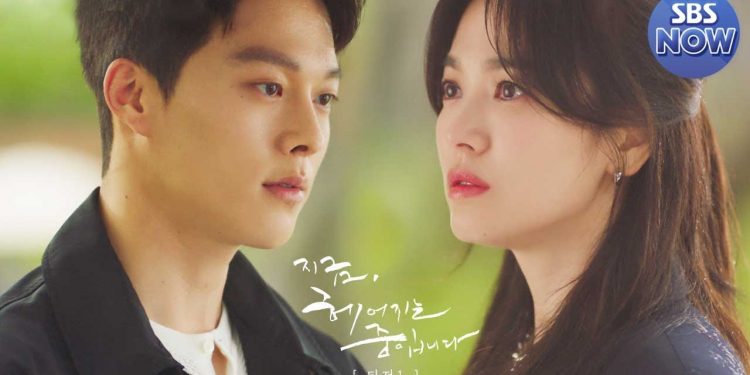 'Now, We Are Breaking Up' Episode 7

Episode 7 of ‘Now, We Are Breaking Up’ is releasing this Friday and things are stirring up in everybody’s life. While Young Eun was drowning with stress and problems at the office, Jae Kook didn’t want to let her go. Taking over SoNo’s responsibility and leaving ‘Claire Marie’ for the other team, Young Eun had to release the new collection as soon as she could. While the head manager is always hot on her tail, Chi Sook, on the other hand, doesn’t seem to care like a spoilt child. Still pissed about Jae Kook and Young Eun having feelings for each other she even went on to abandon Young Eun.

While Jae Kook was determined to change Young Eun’s mind. Appearing in front of her, he asked her if she missed him since the night they met in Busan. Because ever since he crossed paths with her after so many years. She was the only one on his mind. As they have already crossed paths in Paris again, but for some reason, always kept missing each other. The fact that his brother and Youg Eun have a history doesn’t bother him since he is not alive anymore.

The picture of the ‘rainy night’ Young Eun spotted in the busy streets of Paris has comforted her for the past ten years. Wanting to know how the photographer felt clicking that picture. As she was walking back with Jae Kook, she realized that she can’t take him off her mind either. As she walked ahead leaving him alone, he called her telling her about how he felt clueless when he took that picture. Confessing over the phone, he asked her to break up the crazy that they started ten years ago. But as they break up, he wants both of them let themselves fall in love again.

Also Read: Straw Hats Take on Numbers in Episode 1002 of One Piece

After a drinking night with her friends and not being able to sleep, she was about to call him when his call came. As he was about to hang up thinking she is sleeping, she asked him to meet her. Running as fast as he could, he took a cab and got to her. As he stood in front of her, she told him that she wanted to break up the way he want. But knowing what path she is on, she told him that he might find her annoying or get sick of her or regret his decision. But Jae Kook just went on to cut her off in the middle with a hug as he told her to let’s just do it.

As we know that the story of Young Eun and Jae Kook dates back to Paris ten years ago. And now knowing that Jae Kook is Soo Wan’s younger brother, Young Eun was unable to understand her feelings. There wasn’t a time where her mind hasn’t gone back to ten years back when somebody talked with Jae Kook. As CEO Hwang called Jae Kook and Chi Sook in as they were working together in the office, her mind went back in the memories. Thinking about the time she and Soo Wan talked about his family. But returning to work, she wanted to ask why Jae Kook was in Paris alone. As they both got a chance in the inventory closet to spend time alone, Jae Kook decided to open up to her. He revealed that he and his brother had different mothers.

As she went back to the inventory the other day to work with the leftovers, she found Jae Kook eating snacks behind the racks and offered her a subway too. Sitting together behind the racks, Jae Kook showed Young Eun the pictures he took in the morning. Talking about how people can just brush past them and still leave a mark. Remembering the woman who bought his picture. Young Eun complained about the picture being expensive for an amateur and how she had to starve. But Jae Kook joked about how it’s too late for a refund. Looking at the pictures in his camera, she got the idea for the new collection.

Office Troubles That Young Eun Handles Like A Pro!

As if the new collection is not enough for Young Eun, she also has to manage CEO Hwang’s son Chi Hyung. But unlike his sister, Chi Hyung actually puts in efforts and is following the orders. And just on his first day, he spotted something fishy and interesting happening in the office. As he might’ve found a spy in the team planning to leak the designs to another team. Telling the matter to Young Eun, she just told him to let the things go as they are. During the team meeting, Young Eun asked for design samples and gave her feedback. As she saw So Yong was having trouble, she handed her the sample book she made while in college. But after the design submission was finished, SoNo and Claire Marie’s heads were in Chi Suk’s office with similar designs.

While the whole team was worrying over the designs getting leaked, Chi Hyung went on to confront So Yong alone. As he told her that he knew it was her who leaked the designs, she told him not to suspect her on baseless things as she tried hard to get the job unlike him. Defending herself she walked off while Chi Sook took In A’s side and refused to check if somebody leaked the designs and chose her over Young Eun. Throughout the day, Chi Hyung kept on telling So Yong to confess about what she did. While Young Eun came and told them she knew that nobody from her team would leak the designs. Telling them to use whatever’s left, she told them to get back to work and do their best.

After the teams got finalized, SoNo’s team complained about how their hard work was wasted. As Na Ri was complaining about how unfair it was, not being able to control herself Sun Ju took out a box and started packing her stuff. Telling them that she was the one behind the leak because she wanted to join a better team. Hearing that, Young Eun went straight to In A’s office, confronting her about not hiring Son Ju after promising her if she brought her the designs. Threatening her with a lawsuit, Young Eun told her to stay away from her team.

Calling everyone to the inventory, Young Eun presented her new idea of the collaboration and took up So Yong’s design. Hearing Son Ju not being able to work at SoNo, Young Eun told her to apologize to her teammates if she’s planning to leave. Finalizing the concept, the team went on to find influencers. With So Yong challenging Chi Hyung, if he could hire Hye Rin she will forgive him. Taking up the challenge, Chi Hyung went to Hye Rin’s fan signing.

‘Now, We Are Breaking Up’ Episode 7 Release Date

‘Now, We Are Breaking Up’ Episode 7 will release on December 3, 2021. In the upcoming episode, Young Eun and Jae Kook are finally together. But her past might not be done with her yet. After SoNo’s internet live to release the fashion line ‘A-Flow’ went successful. And she was celebrating with the team. A call from Yoon Soo Wan followed by a text asking if she’s doing fine wasn’t the thing she was expecting. With Jae Koo and Young Eun getting close every day.

Where To Watch ‘Now, We Are Breaking Up’ episode 5?

‘Now, We Are Breaking Up’ episode 5 will be available to watch on SBS TV at 10.30 pm KST. While for the global premiere, the viewers can head to streaming services like Rakuten Viki and Viu.