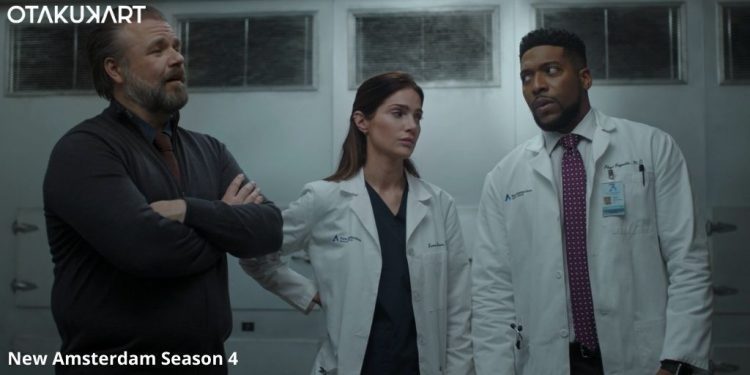 The fans and viewers are looking forward to the release of New Amsterdam Season 4 Episode 12 as the doctors in the hospital have formed a resistance against Dr. Veronica Fuentes. The previous episode of New Amsterdam gave us a look at how the new medical director of the hospital was tossing everything out that Max had built in all those years. Moreover, she was taking away the decision-making capabilities of the doctors and putting several patients at risk.

Meanwhile, in England, we saw Max and Helen move into their new apartment and start a life together. In addition to that, Helen started working in a small hospital along with Max. Furthermore, she was hell-bent on reforming the functioning of the hospital to provide proper care to the patients. However, it was getting a lot difficult to make those changes due to the health care system of the country. Whereas Max had to work as a receptionist until he got his license to work in the U.K.

The American television show follows the genre of medical drama and has been a popular choice among viewers since it first premiered on 25th September 2018. The well-known American tv writer David Schulner has created the show. The show is currently in the fourth season and is going strong. Although, the fans are now excited to watch New Amsterdam Season 4 Episode 12 next. But first, let us find out what happened with all the different stories in the previous episode.

Episode 12 of New Amsterdam Season 4 came out on 4th January 2021. Furthermore, the episode was titled “Talkin’ Bout A Revolution”. The episode began with Max and Helen arriving in London and getting started with their new beginning together. Meanwhile, in New Amsterdam, Veronica was finding it quite hard to communicate with the staff even after a period of six weeks since Max left. So, she called in a compulsory meeting with the major doctors of each department and announced some major changes. Some of these changes had a major impact on Dr. Bloom, Dr. Floyd, and Dr. Wilder’s way of working.

Furthermore, she canceled the Vocational Therapy Program run by Dr. Frome. This resulted in his patients losing their jobs at the hospital. However, Dr. Wilder called in a secret meeting in the morgue to plan resistance against Veronica secretly. But none of the three agreed to it. Soon, Frome was in a tough place seeing his patients lose their jobs because of Veronica. But Wilder gave him an idea about how to get the patients employed again into the hospital, and it worked. Therefore, he joined Wilder in her plan. Meanwhile, Bloom got furious when Veronica didn’t allow her to perform surgery on a cancer patient. Eventually, Wilder helped her too, and Bloom got on board with the plan.

On the other hand, Floyd was handling his complicated situation with Lyn, who was pregnant, but they didn’t know whether Floyd was the father of the child or Lyn’s husband, Dr. Baptiste. Meanwhile, in London, Helen had planned out the new reforms for transforming the medical care at the hospital. Moreover, she got a visit from a senior official that would approve her reforms if he considered them viable. But it all went sideways when Max got the patients to revolt, and the official rejected Helen’s reforms. In the end, Helen fired Max from the hospital because of the revolt he caused. Whereas Max was proud to see Helen do whatever was necessary to improve the hospital’s condition. Moreover, he finally got his medical license to work in the U.K.

“New Amsterdam Season 4 Episode 12 will release on 11th January 2022 at 10 pm ET on NBC.” Moreover, the episode will be titled “The Crossover”. We will get to see Max getting desperate to get back to work and treat people. In addition to that, he will try to go to extreme measures to fulfill his urge to start working as soon as possible. However, this will get him into trouble as he will get caught stealing medical supplies. So stay tuned to find out what happens next.

The ongoing American medical drama is once again grabbing the attention of viewers all around the world. That is why they are eager to know where to watch New Amsterdam Season 4? Well, the answer to that is a rather simple one. “New Amsterdam Season 4 airs every Tuesday at 10 pm ET on NBC in the United States.” Furthermore, the latest episode of the show is available on Peacock the next day. Other than that, the viewers can head to Hulu and Youtube TV to watch the show. Meanwhile, the show is available to stream on Amazon Prime Video as well.