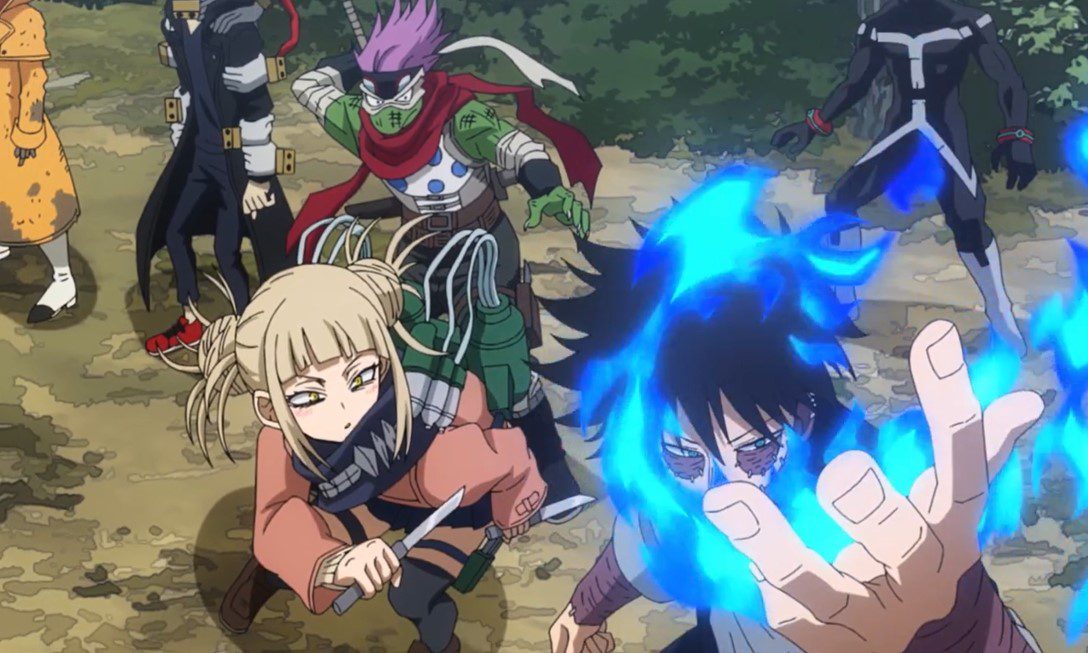 The Metahumans’ era begins with My Hero Academia Season 5 Episode 22, with Villain Dabi leading his army to their destination. This episode will be released this weekend. My Hero Academia Season 5 reveals the story of a young Hero name Izuku Midorya who used his Quirk One For All to protect everyone. From the latest episode of My Hero Academia Season 5, Dabi and his army arrives at Deika City, and they stood in the mountains observing everything. The villains realize that Liberation Army has a force of 110000 in this city. Villain-Mr. Compres-Qurk: Compress comments that Giganto Machia will wake up in one hour forty minutes.

Mr. Compress adds that Machi will begin to look for Tomura Shigaraki and run into the Liberation Army. They will clash, but the villains will win; Dabi wonders what to do with something so annoying. One of the villains told Dabi that Giran introduced him to the League. Himiko Tog-Qurk: Transport felt something and wants that guy that danger ahead. The villains get ready to battle, but they heard the word stop. The guy is Pro Hero- Slidin’ Go, who told the villains that he is on a mission to guide them.

Slidin’ Go told them that he is sending them to speak with the leader of the Liberation Army. Spinne-Quirk: Gecko wonders why a Hero is helping them. The villains followed Slidin’ Go and wonders why there is no one in this city. Villain Tomura Shigaraki-Quirk: Decay leads his crew and wonders the whole town is like this. Slidin’ Go stopped after a mysterious man appeared before them and said, this is Deika City. This is a liberated district, where 90% of the population consists of dormant liberation warriors.

The guy thanks Tomura and the villains for coming to meet with them. He is with a pink-haired lady. The guy adds that they are celebrating since they have received Tomura and the villains as the guest of honor. Dabi wonders if that guy is Hanataba from the Hearts and Mind Party. Spinner asks if Hinataba is an important guy. Hinataba clicked his finger and said, let’s begin the Meta Liberation Army revival party. The villains are surprised to be attacked, and Twice wonders where Gira is. Hanataba asks if Twice is talking about the broker, who is waiting with their grand commander.

Twice reminds Hanataba about his promise, and Tomura realizes that they are facing a miniboss. The guys dive in and try to know down Tomura, who uses Decay and turns them into a speck of dust. Toge got blasted away and wondered why the ground is exploding too. She heard a voice of a lady saying that serial blood-loss deaths and Himiko Toga is the culprit. Vilain Giran is beaten to a pulp and told the leader that he made a mistake, and if they let the bioengineered Momus loose, this city won’t stand a chance.

Villain Re-Destro replies that they can’t release the Nomus, and there are three reasons. Re-Destro explained those three reasons and talked about All For One and a League of Villains that can’t use Nomus. At the street, the battle continues as the villains exchanged massive strikes. Chitose Kizuki brawled with Himiko Toga and explained Toga’s history. Kizuki beat Toga, who begins to bleed and decided to get serious. Dabi is using his blue flames to burn his opponents. Spiner worries that whenever they kill them, they keep on coming back. Twice protects Toga from Skeptic.

Where To Watch My Hero Academia Season 5 Episode 22

Rosalia’s Boyfriend: Who Is The Spanish Singer Dating in 2021?

Apple TV+ September 2021: What Is The Release Schedule?