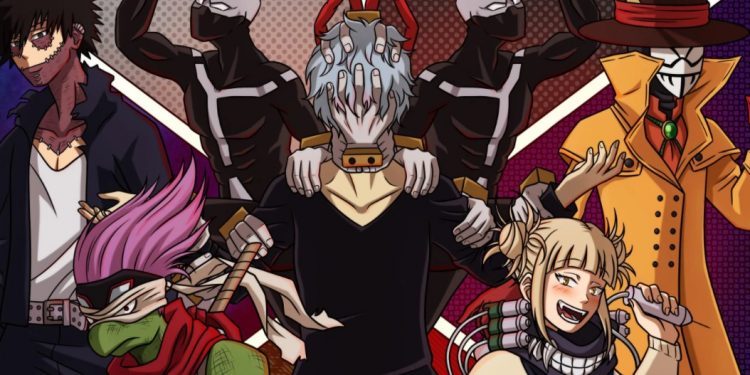 My Hero Academia Chapter 340 reveals Mt. Lady leading Class 1-A to find the League of Villains and the Liberation Army. All Might and Hawks are also preparing for the villains since the final war begins soon. Aoyama’s case is yet to be solved since the Pro Heroes and students interrogate Aoyama and his family. They know that Aoyama and his family have been serving All For One and believe that it is challenging to cut ties with All For One since it will be their death if one does that. But Deku and other students support Aoya since he was not helping All For One of his will.

The students have learned that Aoyama was truthful and might not betray them, but Eraser was not convinced since he knows how All For One operates. He called the students and Present Mic in private and told them something that shocked their ears. The students thought Aoyama would get expelled, but the case was different. The mysteries behind Aoyama’s case are yet to be revealed. Eraser knows how they will settle Aoyama’s case. The chapter begins on Deku’s side with other students.

The studio has become bigger, and they can see the U.A High barrier from there. While they are at the studio, Deku shows everyone his damaged gauntlet. He asks Mei if he can fix it, and Mei asks him if he is in a hurry. Deku shows Mei that he is serious but also in a hurry. Mei told him that they could not fix it in a short time, and she revealed that the gauntlet’s condition was not good, and they had to start from scratch when they were fixing it.

Previously on My Hero Academia Chapter 339

Mei also had other matters, and she lacked the material to fix it and replace a few things. Mei went out, and Lida reminded her about her armor. But she continues to run while telling him that they can do that since she lacks the original records. Later, Mei works on something, and Deku confronts her asking her what she is working on, but he sees a hologram of U.A High evacuation blocks. He was surprised, and Power Loader reveals that Mei played an essential role in creating the barrier.  But Mei wants to improve the security after building something and producing new features.

Mei interferes and reveals how her inventions work as heroic activities. She tossed the glove at Deku, and they hit his face since he was not focusing. Mei reveals that it is not a duplicate copy, but she uses her technology to make that. She also gave some gloves to Lida, and the same thing happened to him. Mei smiles, realizing that they will win the fight and guarantees them that. On the other side, Class 1-A, with Mt. Lady, heads out and reveals that their goal has not changed since they will search for the League of Villains and Villains and the Liberation Army.

The students realize that Aoyama’s case is still on and wonders if they can help him. Todoroki told them they would help Aoyama since he knew what he wanted. In the Kansai region, Fat Gum, Nejire, and Amajiki fight with the villains while protecting the civilians. Fat Gum said the upcoming battle would be massive, but various barriers protect the Kansai region. Meanwhile, All Might and Hawks enter a building. All Might reveals that he has collected everything he needs for their plan.

You will be able to read My-Hero-Academia Chapter 340 online on VIZ Media’s official website. My Hero Academia returns this coming, and the latest spoilers, updates, and latest three chapters are serialized on Shueisha’s online magazine & Shonen Jump. A new chapter of My Hero-Academia will get its update every Sunday on official platforms unless the manga takes a break; the spoilers for My Hero-Academia-Chapter 340 will be released this coming week. Let’s meet when My Hero Academia-Chapter 340 is released.