The fans and the viewers are eagerly waiting to watch Murdoch Mysteries Season 15 Episode 7. This is not at all a surprise considering the events of the previous episode. The audience was excited and thrilled with how the sixth episode of this season turned out. The Canadian television series has been highly popular since it first came out in the year 2008 on 20th January. Furthermore, the tv show follows the genres of mystery, period drama, and crime, combining them all together to bring in a wholesome package.

Other than that, the show had a different title, that is, “The Artful Detective,” in the United States till the end of Season 11. However, it went back to the original title from the beginning of the twelfth season. The series has had a really good run over the years, and the fans and viewers have loved it a lot. The show has a rating of 8.2 out of 10 on IMDB, which puts it among some of the best tv series in the world. In addition to that, the story of the series is quite engaging, and the fans are always intrigued to watch it.

Moreover, the characters in the show also play a major role in attracting newer audiences in every season of the show. They are highly likable and the viewers start to like them instantly. A very well-known British-Canadian writer named Maureen Jennings has written the ‘Detective Murdoch’ novels. Those novels have inspired the storyline and characters of this hit show. Meanwhile, R.B. Carney, Alexandra Zarowny, and Cal Coons have jointly developed the show. The viewers are loving the latest season of the show and are now awaiting the release of Murdoch Mysteries Season 15 Episode 7. However, let’s take a recap of the previous episode first. 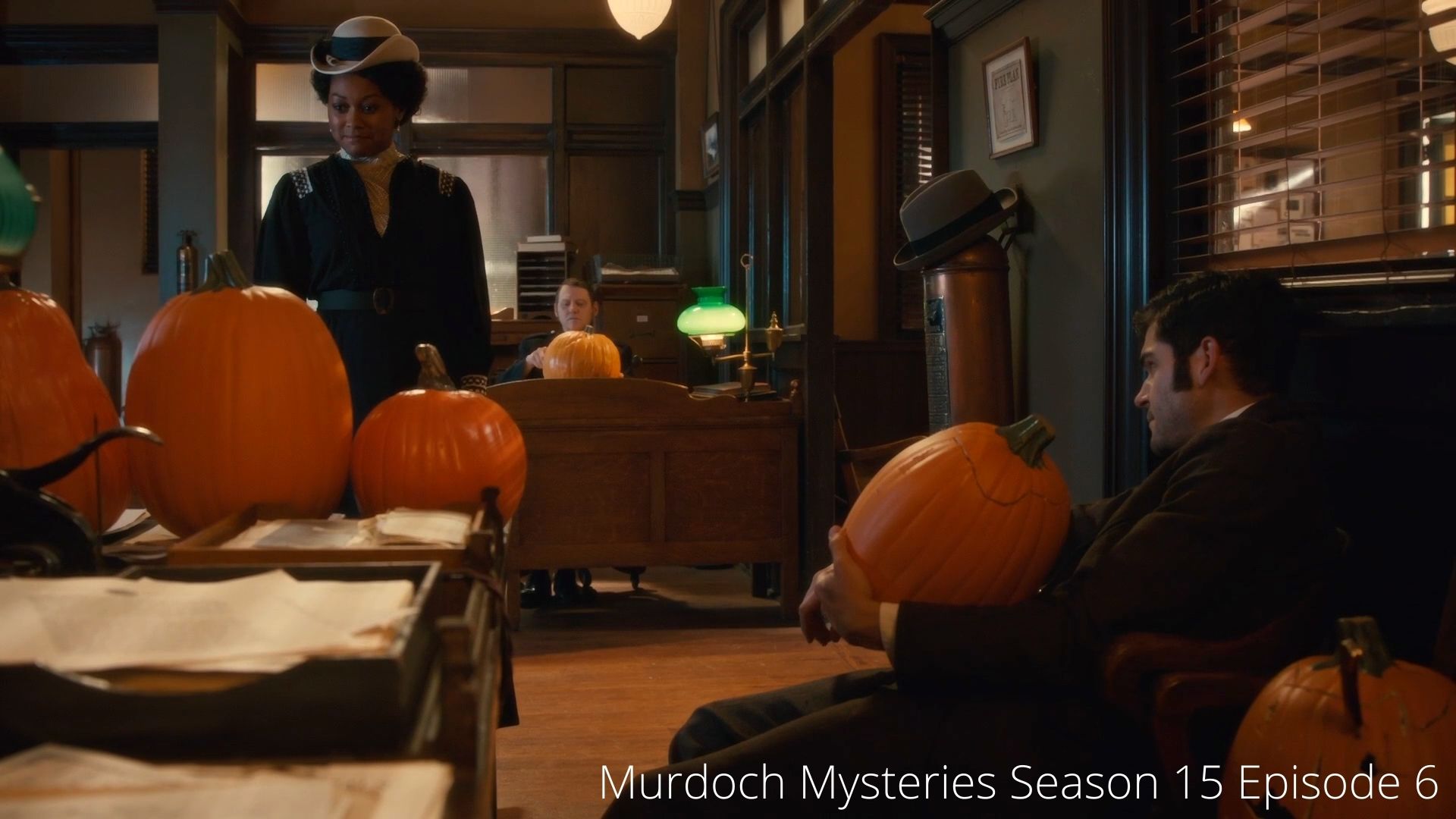 Episode 6 of Murdoch Mysteries Season 15 came out on 25th October 2021. Furthermore, the episode was titled “I Know What You Did Last Autumn”. The episode began with a character named Irene Robbins getting murdered by a clown. Murdoch, Crabtree, and Hart investigate the murder and question Irene’s boyfriend, Perry about what went down. At first, he lies that he fought the clown but later, when Murdoch discovers that he lied, he comes clean that he didn’t do anything as he was scared. Soon another man named Donovan is murdered in Leigh Iverson’s house.

Leigh Iverson is the sister of Heather Iverson, who was shamed in school for getting intimate with Donovan when she was a teenager and committed suicide. Leigh tells Murdoch that both her and Donovan’s grief brought them together, which is why he was in her house. Murdoch, Crabtree, and Inspector Thomas move ahead with the investigation, and it leads them to one of the teachers from the school named Roger that might be dressing up as the clown. However, Roger appears tied up on Halloween and tells them that he was kidnapped. Although, they do not believe him.

However, the reporter Louise Cherry almost gets attacked by the clown that makes Murdoch and the others believe that it’s not Roger. Soon the clown comes to Julia’s house to kill another student named Andrea that is hiding in Murdoch’s house. But Julia fights the clown and reveals the mask. It is Leigh behind the mask, and she confesses to murdering all those who shamed her sister.

The case seems to be closed, but Cherry tells Murdoch that it was someone else as the Clown who murdered Donovan, not Leigh. The next thing we see is Roger getting stabbed on his doorstep. The clown takes off the mask in front of Crabtree. It is Heather behind the mask. Leigh and Heather confess that they killed their parents, too, as they were ashamed of Heather. Whereas she faked her death to later get revenge on everyone who shamed her.

Murdoch Mysteries Season 15 Episode 7 will release on 1st November 2021 at 8 pm on CBC. Furthermore, the episode will be titled “The Incorrigible Dr. Ogden”. The previous episode once again intrigued the fans and got them excited for the next one. The next episode will be another worth-watching episode with new mysteries. The show always manages to get the fans hooked to the new episode. Therefore, do not forget to watch the upcoming episode.

The crime drama mystery series has been attracting a lot of viewers from around the world. The viewers are searching about where to watch Murdoch Mysteries Season 15? Well, we have a simple answer to that question. “Murdoch Mysteries Season 15 airs every Monday at 8 pm on the CBC television network.” Other than that, the series is available with the previous seasons on Hulu. Furthermore, the previous seasons are also available on Amazon Prime Video and Youtube TV. So go ahead and binge-watch the series right now.

‘Last Train to New York’: All That You Need to Know about the U.S. Remake Of Train to Busan

Princess Diana Affairs: Who Has She Dated Before?